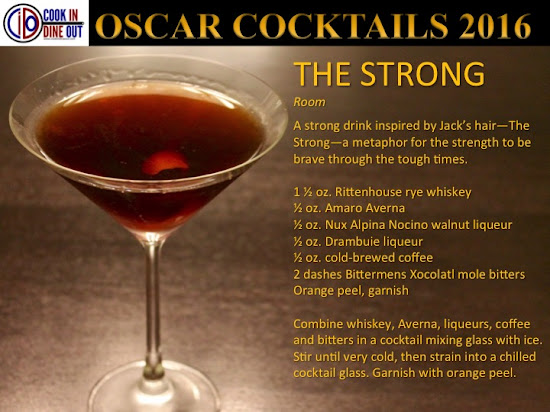 Room is a wonderful adaptation of Emma Donoghue's powerful 2010 novel about a young mother, Joy (Brie Larson), and her 5-year-old son, Jack (Jacob Trembly), who live in a garden shed they refer to as "room" and never leave, held captive there by "Old Nick," who kidnapped Joy years ago. Although Joy has shielded Jack from the truth of their situation, as he is now older, she begins to tell him the truth and hatches a plan with him for them to ultimately escape and undertake the difficult task of returning to normal life. The movie is nominated for four Academy Awards: Best Picture, Actress (Larson--who is the frontrunner), Director (Lenny Abrahamson) and Adapted Screenplay (Donoghue, adapting her own novel).

Of all of this year's films, Room was the most challenging to create a cocktail for. A story about a captive mother and child does not shout out "cocktail." There aren't the kind of sensual cues--drinking and dinner scenes--that sometimes provide inspiration.

I reached out to my Twitter followers for suggestions, and Mangia.TV, purveyors of incredibly good Cajun spice rubs, suggested the idea that put me on course: build the drink around the concept of "The strong." In the film, Jack has long hair because his mother has never cut it, telling him that's where he gets his strength, so he refers to it as "the strong." Later in the movie, when his mother is in poor health, he cuts his hair and sends it to her to give her the strength to recover. It's a sweet moment and an important concept in the film, which is ultimately about the strength to survive what life throws at you, whether that be the horrors of captivity or the challenges of everyday life.

So I wanted a drink that was, obviously, strong. I thought about the cocktails we'd had recently at The NoMad Bar in New York, several of which included cold-brewed coffee as an ingredient. Jack's hair is dark brown too, which was perfect for creating a drink that's dark brown in color. Using rye whiskey as a base, I added Averna, an Italian amaro, for bitter and sweet flavors and two liqueurs: the nutty walnut liqueur Nux Alpina Nocino and spicy-sweet Drambuie. Mole bitters add some additional spice. There's not a lot of coffee in this drink--and I didn't even steep it as long as most recipes recommend--yet the coffee flavor definitely comes through nicely along with the bitter, sweet and spicy flavors.

Note: To make cold-brewed coffee, combine 3 tbsp. of coarsely ground coffee with 1 cup of cold water in a French coffee press. Let stand at room temperature for 6 to 12 hours (the recipe I used said 12 hours, but I did it for only 6, which was sufficient for the purposes of this drink), then slowly push down the coffee press plunger. Store coffee in the fridge for up to 2 weeks.