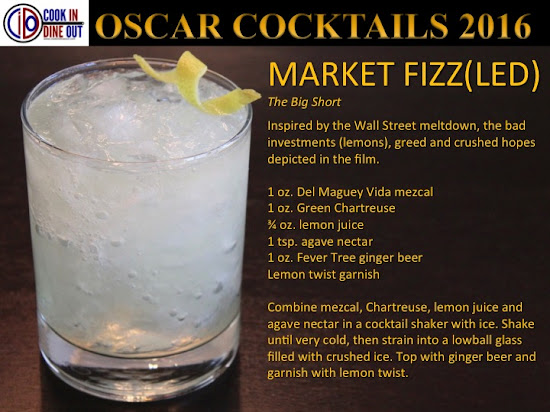 The Big Short dramatizes the late 2000s financial crisis caused by bad mortgage practices and is based on the book of the same name by Michael Lewis. The film is nominated for five Academy Awards including Best Picture, Supporting Actor (Christian Bale) and Director (Adam McKay).

The Big Short takes a serious complicated subject, the financial crisis of 2007-2008 that triggered a major economic recession, and manages to make a film that provides a lot of detail but in a way that's engaging, even funny at times with excellent performances from its all-star cast that includes Christian Bale, Steve Carell, Ryan Gosling and Brad Pitt.

Because I've been so into "classic" cocktails lately, you'll find that a lot of this year's cocktails are rather...high-octane. The sort of cocktails that are mostly all booze and really should be sipped rather than gulped down. This one is comparatively lighter, but made with serious ingredients--not unlike the film that inspired it. We've got mezcal for all that money that went up in smoke, Green Chartreuse for money and greed, lemon juice to represent all those bad mortgage investments (a bad investment is sometimes called a "lemon") and ginger beer to give the drink some fizz...er, fizzle, just like the market did. That's actually the root of the this drink: a "fizz" is a cocktail with predominant sour flavor and carbonated water--which could be soda or tonic, but here I used ginger beer.

Combine mezcal, Chartreuse, lemon juice and agave nectar in a cocktail shaker with ice. Shake until very cold, then strain into a lowball glass filled with crushed ice. Top with ginger beer and garnish with lemon twist.