Oscar Cocktails: The Woods (The Revenant) 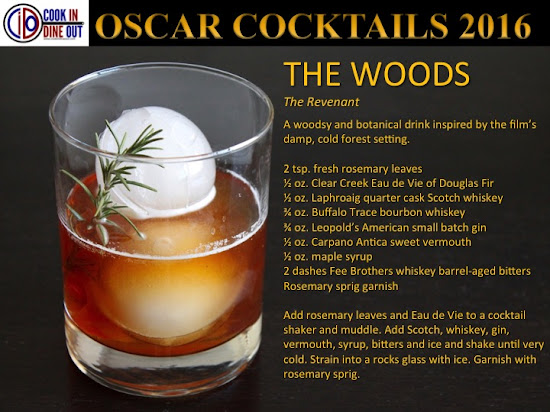 The Revenant tells the story of early 1800s American fur trappers fleeing from an Indian attack. When one trapper (Leonardo DiCaprio) is badly injured by a bear, another trapper (Tom Hardy) is assigned to tend to him but instead kills his son and buries the injured trapper alive, believing death will be soon. Instead, the trapper recovers and seeks vengeance. The brutal film is nominated for 12 Academy Awards--this year's most-nominated movie--including Best Picture, Actor (DiCaprio), Supporting Actor (Hardy) and Director (Alejandro G. Iñárritu).

When I was thinking of early ideas for this year's Oscar cocktails, I first envisioned The Revenant's drink as a cross between an Old Fashioned and a Sazerac, nodding to the movie's historical setting amid the wilderness of the Louisiana Purchase territory (the Old Fashioned is based on the earliest cocktails, and the Sazerac originated in New Orleans). But that was before I saw the movie, which his such a visceral experience. It's setting in the snowy woods struck me as particularly important, for the movie is as much about revenge as it is survival. So I took the drink in new direction, wanting ingredients that were woodsy and botanical. This has a somewhat long list of ingredients, but they all play off each other well--the woodsy flavors of bourbon, muddled fresh rosemary and Douglas Fir Eau de Vie with the botanical gin, a touch of smoke from the Scotch, and sweetness from the maple syrup, another tree-based ingredient. The original Revenant cocktail was good--I might share it later--but The Woods is even better.

The Woods (The Revenant)
A woodsy and botanical drink inspired by the film’s damp, cold forest setting.