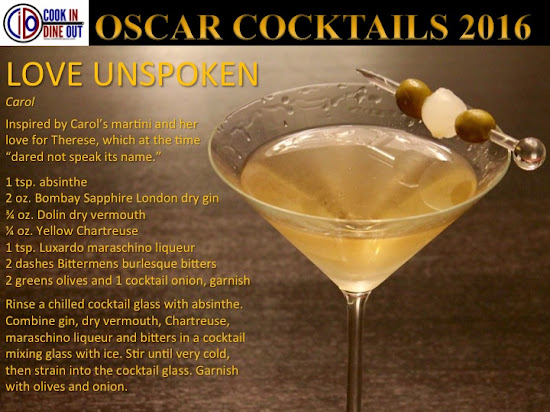 
Set in the early 1950s, Carol tells the story of its title character (Cate Blanchett), who falls in love with Therese (Rooney Mara), a young woman working in a department store. While pursuing a divorce from her husband (Kyle Chandler), Carol pursues a relationship with Therese complicated by the times in which same-sex relationships were verboten. The film, directed by Todd Haynes, is nominated for six Academy Awards including Best Actress (Blanchett) and Supporting Actress (Mara). I was very surprised the film was not nominated for Best Picture. In fact, since the Academy expanded the slate of best picture nominees in 2009, this is the most nominations a film has received and not been a Best Picture nominee.

Carol has a beautiful classic 1950s look, so I wanted an elegant cocktail fitting for the times and representative of Carol and Therese's love. Carol drinks a martini several times in the film, so I took a dry gin martini as my starting point and made some modifications to fit the film's story and characters. I rinsed the glass with absinthe, a bitter fennel-flavored French liqueur that was banned in the United States for many years--not unlike the legal status of same-sex relationships, which were criminalized for decades and have only recently received full legal status. I sweetened the drink with two liqueurs to represent the two characters: Yellow Chartreuse for blonde Carol and maraschino liqueur for youthful Therese. The burlesque bitters add a touch of bitterness to the drink, symbolizing the bitterness that Carol and Therese must endure. The garnish comes directly from the film, since one of Carol's martinis was garnished with two green olives and a cocktail onion.


Bonus: Love Unspoken (Carol)
Inspired by Carol’s martini and her love for Therese, which at the time “dared not speak its name.”