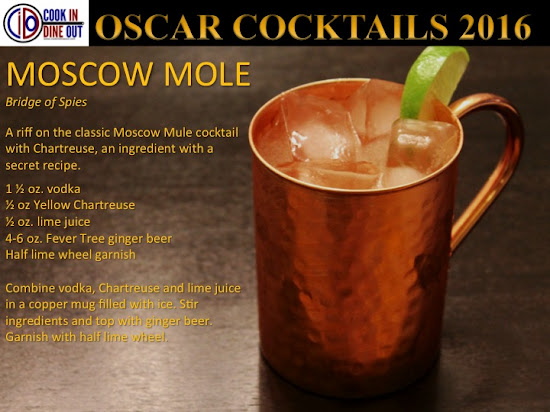 Bridge of Spies is based on the true story of American lawyer James Donovan (Tom Hanks) who, in 1957, unsuccessfully defended Rudolf Abel (Mark Rylance) during Abel's trial as an accused Soviet spy. Donovan later successfully negotiated a prisoner exchange with the U.S.S.R. and East Germany, exchanging Abel for an American Air Force pilot captured by the Soviets and an American student held by the East Germans. The film is nominated for six Academy Awards, including Best Picture and Supporting Actor (Rylance). It is the 10th film directed by Steven Spielberg to be nominated for Best Picture, following Jaws, Raiders of the Lost Ark, E.T. - The Extra-Terrestrial, The Color Purple, Schindler's List (a Best Picture winner), Saving Private Ryan, Munich, War Horse and Lincoln.

This one was really too easy. Bridge of Spies is a spy story. Spies deal in secrets. A "mole" is a term for a spy. The Moscow Mule is a classic cocktail made with vodka, lime juice and ginger beer. To turn the Moscow Mule into the Moscow Mole, I added an ingredient with a secret recipe--Yellow Chartreuse, a French herbal liqueur that has been made for centuries by Carthusian monks. It's recipe is purportedly only known to the two monks in charge of production. Voila.

Combine vodka, Chartreuse and lime juice in a copper mug filled with ice. Stir ingredients and top with ginger beer. Garnish with half lime wheel.
Related