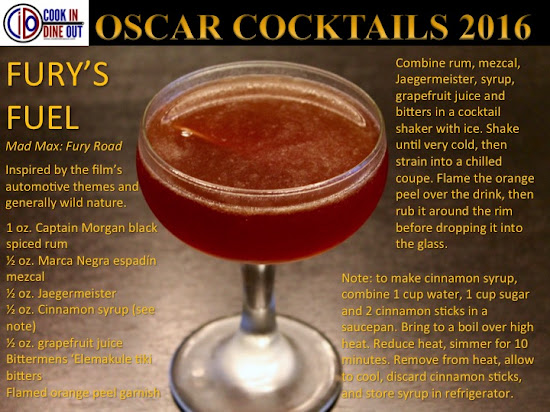 Mad Max: Fury Road picks up the Mad Max movie franchise 30 years after the series'  third installment (Mad Max Beyond Thunderdome). If you're not familiar with Mad Max, it's a dystopian science fiction story, set in a future where Earth has become a desert wasteland and battle is waged over scarce resources--namely water and gasoline. The visually stunning, pulse-pounding film is nominated for 10 Academy Awards including Best Picture and Director (George Miller).

Mad Max is a rather bold film. It unfolds at break-neck pace and never lets up. There are few slow moments between the action, much of which is chase scenes involving futuristic motor vehicles moving across the wasteland. Translating all that into a drink, I wanted something bold that would assault the senses and nod to the film's automotive aspects. The drink had to be brown, obviously, and smoky, so I used a black spiced rum as the base with a bit of mezcal to add smoke, plus a flamed orange peel garnish. The german herbal liqueur Jaegermeister has a reputation as a party drink, so it seemed like a fitting choice to add some bitter and sweet flavors here, along with cinnamon syrup. I used grapefruit juice for some sour flavor and finished the drink with Bittermens tiki bitters for some additional spice.