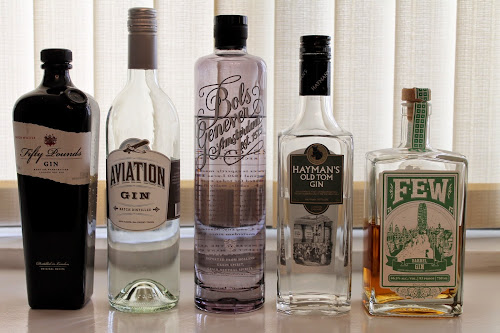 This is Part 2 in a series of three posts on stocking your home bar for 2015 Summer Cocktails Week. See Part 1 on Equipment and Glassware.

Now that you've acquired some basic equipment and glassware, you're going to need something to fill those glasses with. Stocking bottles may be the most daunting task of setting up your home bar. There are so many choices! How much should you spend? Conceivably, it could be quite a lot.

I recommend a "go slow" approach to stocking your bar, rather than stocking a bunch of different bottles that you may (or may not) use at some point. A key aspect of this approach is identifying what type of drinker you are. Do you like a variety of gins but prefer one brand of whiskey? Do you love rum but not tequila? Does that fact that you shunned tequila after a bad binge in your early 20s mean you can't now enjoy (much higher quality) tequilas years later? Some tips:

There are many different types of spirits that can be used in cocktails. Below is a list of a few of the more popular types and my thoughts on selecting them.

If I had to choose a favorite spirit, it would be gin. Gin is a neutral spirit (i.e. purified through distillation) flavored with botanicals--typically juniper along with a variety of other spices and fruits. The most popular gins tend to be British, particularly London dry style, which is our favorite for Gin & Tonic and includes recognizable brands like Tanqueray, Bombay (and its more aromatic product, Bombay Sapphire) and Beefeater. A lesser-known London dry gin that we're into lately is Fifty Pounds Gin (which, thankfully doesn't cost £50). Plymouth is another popular British gin, not a London dry, but its own clean style that is great in a classic Dry Gin Martini. Hendrick's is also a great gin because of its cucumber flavor; try it in the honey-ginger Indochine Bee's Knees.

American-made gin has really taken off in recent years. It tends to have a "greener" flavor than British gins, with botanicals other than juniper being more forward. Aviation gin, a lavender-forward gin made in Portland, Oregon is great in a Last Word. Other American gins I like include Bluecoat, Leopold's and Greenhook Ginsmiths.

Some other interesting types of gin include two older styles: Genever, which is considered the original gin, and Old Tom, a sometimes sweetened version. Both of these vanished from the American market for a long time but have come back recently. Try Hayman's Old Tom gin in a Martinez, a martini precursor. Lastly, there's aged gin, which gives it richer, woodsier notes, almost like a whiskey but with gin's botanical profile. Few makes a barrel-aged gin that's good in the Berlioni.

Other notable gin cocktails include the Rickey, Tom Collins, Gimlet, and Negroni. 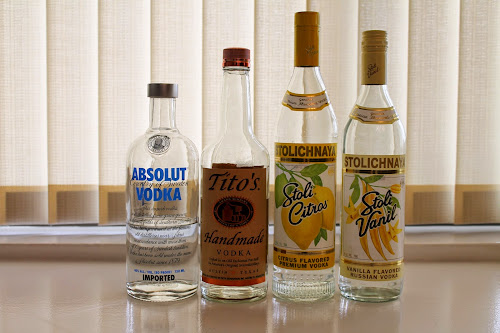 Vodka is a neutral spirit like gin but without the botanicals. Unless you're buying a flavored vodka (like vanilla or citrus pictured above), it's meant to be flavorless. In the late 20th century, vodka knocked gin from its former perch, becoming the most popular spirit and a popular gin replacement in many cocktails (including the martini). Given the craft cocktail movement's love of old-school recipes, vodka has suffered a backlash in recent years (the Death & Co. book, for example, contains no vodka recipes). While I'm not a big vodka fan, it can be a useful blank canvas if you want to showcase other flavors. Smirnoff and Absolut are good mid-range brands. Stolichnaya is a little pricier and mostly useful for its flavored vodkas (vanilla vodka, for example is great in a White Russian, while Stoli Citros is nice in a Cosmopolitan).

Many popular vodka cocktails are just gin cocktails with vodka substituted; however, vodka is indispensable in The Vesper, Cosmopolitan, White Russian and Harvey Wallbanger. For a good Vodka & Tonic, I recommend American-made Tito's vodka with Fever Tree Mediterranean Tonic Water. 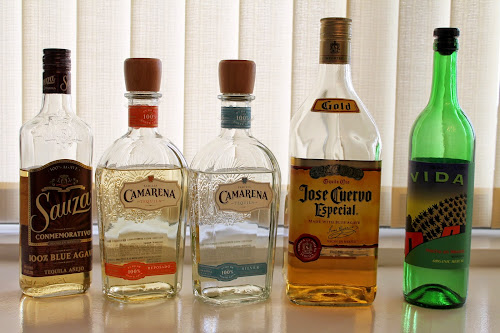 For whatever reason, no spirit has a closer association with youthful debauchery than tequila. For that reason, I know quite a few adults who won't drink tequila--they had too many bad experiences with it in their youth. This is a shame, for I imagine they weren't drink very good tequila and this spirit, just like any other, ranges from pretty poor to pretty amazing in quality.

Tequila is made from the blue agave plant, with the finer tequilas made of 100% blue agave, and less-fine ones made from other sugars (although at least 51% agave). There are four basic types of tequila. Mixto is tequila that is not 100% agave and is typically the less expensive kind like Jose Cuervo Especial Gold. I'll drink mixto in frozen margaritas, but for nicer cocktails I prefer one of the other styles. Finer tequila break down into three basic types: White/blanco/silver, which is unaged; reposado, which is slightly aged (my favorite for most tequila cocktails); and añejo, which is aged the longest. Generally, aged tequila is more expensive and browner, with some añejo tequilas being quite costly like fine whiskeys, although you can get reasonably priced añejo from brands like Sauza. Jose Cuervo, Camarena, Herradura and Hornitos are all brands that make tequila I enjoy.

Then there's mezcal, which is made from roasted agave, giving it a smoky flavor. Mezcals can be harder to find than tequila, but are enjoying a surge in popularity these days. Skip any that come bottled with worm larvae or other creatures (I saw one with a scorpion in it once, ewww). Because they are rarer, mezcals can also be pricier than tequila. Vida, produced by Del Maguey, is an approachable, affordable place to start.

Tequila is, of course, most closely associated with the Margarita, whether on-the-rocks or frozen, but also popular in the Tequila Sunrise and Paloma. Mezcal can be used in many tequila cocktails for a smokier drink, like the Smoky Paloma or Margarita on Fire. 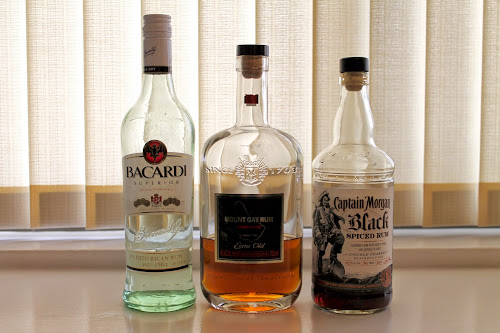 Rum is distilled from sugar cane and produced mostly in the Caribbean and South America. It can be light, dark or even black, with the darker rums generally having more flavor. I'm not as much into rum as I am gin, tequila or whiskey, but it's a great summer spirit, as its Caribbean origin makes it perfect for tropical cocktails, especially tiki rinks like the Mai Tai or rum swizzles (like The Theory of Everything). Bacardi, Mount Gay and Captain Morgan are popular brands, but there are many small-scale producers and very fine rums can be quite costly. 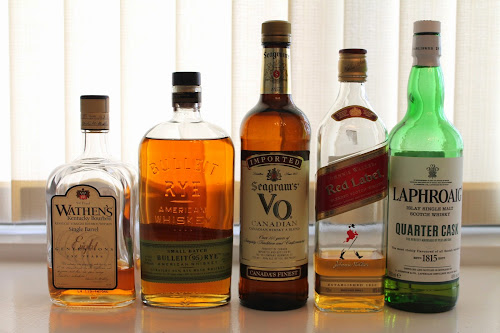 I still consider myself a newbie when it comes to whiskey (which is the American or Irish spelling; it's "whisky" in Canada and Scotland) is made from fermented grains and aged. It comes in many different styles and is produced mostly in North America, Ireland and Scotland. Scotch whisky, Irish whiskey, Canadian whisky and American whiskey are the four umbrella styles, and of course there are sub-styles.

In America, the most common ones are bourbon, which is made mostly from corn, and rye, which (no surprise), is made mostly from rye. They are similar in flavor, although bourbon is generally smoother and sweeter. While bourbon is more common than rye, there are many brands of both. For bourbon, Knob Creek and Buffalo Trace are popular, affordable brands. For rye, I like Bulleit and Rittenhouse.

The Scottish version is called Scotch whisky (or just "Scotch") and is often smokier than American whiskeys, due to the use of peat fires to dry malted grains. It is most commonly sold as "single malt" or "blended," the latter being a blend of various single-malts and other whiskys (like grain whisky). I don't use Scotch much in cocktails, although I do sometimes float a little Islay Scotch on top of a drink. Islay Scotches are known to be particularly smoky, so this gives the drink a nice smoky aroma. The Laphoraig Islay Scotch is fantastic. Brandy is a spirit made from fruit, particularly grapes. It is sometimes the base spirit of a cocktail or it may be a modifier--a secondary component in a cocktail that modifies the base spirit. Apple brandy, sometimes called apple jack, is a favorite, as well as cognac, a French grape brandy. And Kirschwasser, a cherry brandy, is essential for making cheese fondue. I'm not a big brandy drinker, but I have a few on hand for cocktails, particularly the cognac and applejack. Notable brandy cocktails include the Sidecar, Brandy Alexander and Vieux Carre. 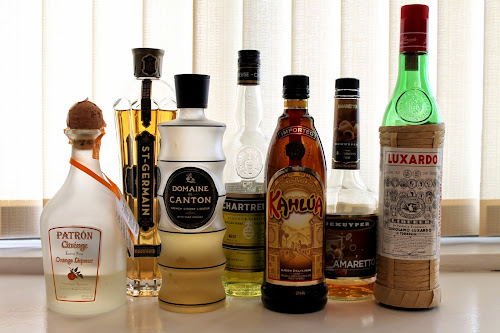 Liqueurs are distilled spirits that are flavored and sweetened. You can buy liqueurs in just about any imaginable flavor these days. I have many and have chosen just a few common ones for the photo above. If you like Margaritas, you'll want to have orange liqueur such as Cointreau or Patrón Citronge. St. Germain, an elderflower liqueur, is a popular choice. Ginger liqueurs like Domaine de Canton are fun to experiment with. Herbal liqueurs like yellow or green Chartreuse are common in many cocktails. Kahlúa is essential for making White Russians. You can't have an Amaretto Sour without amaretto liqueur. And maraschino liqueur, like Luxardo makes, is common in many old-school cocktails. 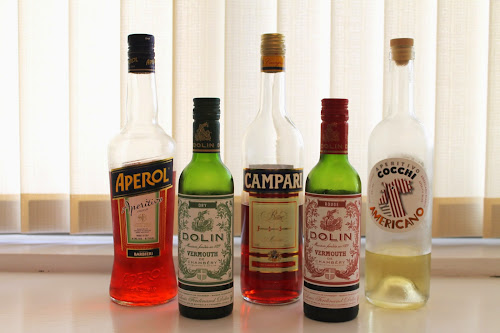 This last category of modifiers is one of the most interesting.  Fortified wines are wines that have been combined with brandy and other aromatic ingredients. These bottles are not really spirits like the bottles discussed above, and consequently, most have much lower alcohol content, which means they require refrigeration and will spoil much sooner than spirits, most of which you can keep in your cupboard indefinitely. Dry and sweet vermouth are very popular choices, and essential to drinks like the Dry Gin Martini and Manhattan, respectively. I like the Dolin brand, particularly because they sell their vermouth in smaller bottles, which is ideal for making cocktails where you only use a little bit.

Bitter Italian aperitifs like Campari and Aperol (essential for a Negroni) have become very popular lately, as have their bitter relative the Amaro, a class of bottles like Cynar that are considered digestifs or liqueurs. Cocchi Americano is a great aperitif wine. It's a little sweet and gets its distinctive bitterness from quinine, the same ingredient that makes tonic water bitter. Cocchi Americano is essential for making a Vesper. 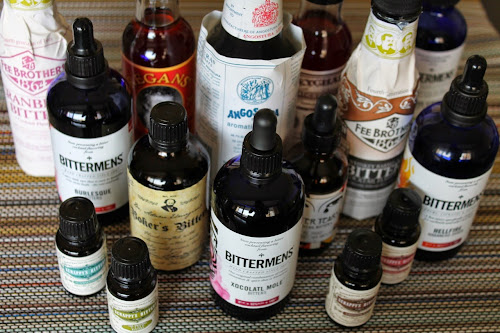 Not the aforementioned bitter digestifs that are sometimes called "bitters," this is a different class of bitters. They come in small bottles and are made from a menagerie of herbs, spices, fruit peels and other ingredients. Some call them the "salt and pepper" of cocktails, as they are added in amounts of one or two dashes to many drinks. They are alcoholic but considered "non-potable"--so bitter that you wouldn't want to drink them on their own. Hence, they can be sold in supermarkets in many states (just like vanilla extract). Angostura bitters is by far the most popular and used in many drinks, but there are lots of other great types of bitters. Last summer I wrote a week's worth of content on cocktail bitters; check it out if you want to learn more.

Lastly, there are the mixers, the nonalcoholic ingredients in many cocktails. Juices from freshly squeezed citrus fruit (limes, lemons, oranges and grapefruit) are common mixers, as are carbonated drinks like club soda, tonic water, lemon-lime soda and cola. Even coffee, milk, cream and tea can be mixers, depending on the drink.

My my own experience served as the research for much of this article, but I was also grateful to find excellent information from Epicure & Culture, MikeRiccetti.com and Wikipedia.

The Theory of Everything

Stocking Your Bar: Equipment and Glassware
Posted by Cook In / Dine Out at 12:00 AM