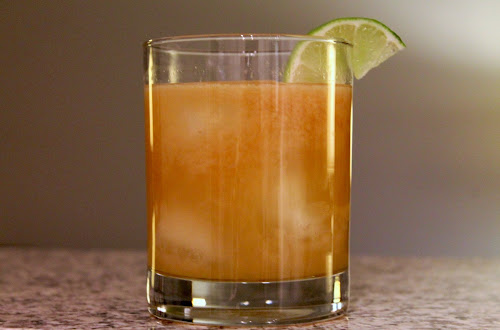 There's something about Chinese restaurants that make me want to drink a tiki cocktail, specifically a Mai Tai. Perhaps it's because the Chinese restaurant we frequent most often has a great list of tiki drinks, and the Mai Tai is our favorite. Never mind that tiki drinks are more Polynesian-inspired; I'm always happy to pair a sweet/tart Mai Tai with spicy Kung Pao Chicken.

The classic Mai Tai (and there's some debate as to what this is, which I'll get to in a moment), is a mixture of rum, orange curaçao, orgeat (an almond syrup) and lime juice. It's tart and refreshing with a slightly savory note from the orgeat, a syrup made from almonds. While this is considered the standard by the International Bartenders Association, there are many variations.

The Mai Tai dates back to the 1940s. Its creation is most frequently credited to Victor Jules Bergeron, Jr., founder of the Polynesian-themed restaurant chain Trader Vic's. I say "most frequently," because--as I've found is not uncommon in cocktail lore--there's an alternate story that credits its creation to Bergeron's rival, Ernest Raymond Beaumont Gantt, a.k.a. "Don the Beachcomber," who was also a Polynesian-themed restauranteur. Don's Mai Tai is similar, yet distinctly different, using about twice as many ingredients. In addition to rum and lime, it has grapefruit juice, falernum (an almond syrup, like orgeat but spiced), Cointreau (instead of curaçao), bitters and pernod. Sounds interesting, but preferring simplicity, I'm giving the benefit of the doubt to Vic, who insisted he created the Mai Tai. Unfortunately, neither of them are around to argue the point, as they both died in the '80s.

Rum, orange curaçao and lime juice are easy to come by, but orgeat? That's a little harder. You can buy orgeat, but you can also make it. Neither of these options seem particularly appealing, as good orgeats tend to be hard-to-find and expensive, and most recipes for making it seem long and involved.

However, there's a fantastic short-cut though for making orgeat. I'd call it a hack, except I despise how that term is being used these days. I hear "hack" and I think of violent phlegmy coughs (sorry to digress). Anyway, cocktail writer Kevin Liu, author of the fabulous book Craft Cocktails at Home, has a much simpler and really smarter way to make orgeat: use almond milk. This is such a brilliant idea. None of that time-intensive and repititious soaking, grinding and straining that other recipes call for. And here's the thing: the almonds you buy at the store are the "sweet" kind, and orgeat really should be made with bitter almonds, since they make for better almond flavor. Bitter almonds aren't available at grocery stores, but they are typically used in making almond milk. So not only is Kevin's method simpler, it's truer to what orgeat should be. Fantastic. I'm not going to reproduce his recipe here, since I think you should visit his site, but it's pretty easy and calls for almond milk, almond extract (you probably have some already if you do much baking), sugar and orange blossom water, which, after some searching, I found in the Asian aisle at Whole Foods.

Given that orgeat isn't so easy to find, there are quite a few variations that call for other ingredients. You can make it with a Mai Tai "mix," like this one, which, as far I can tell, contains lots of chemicals but no nuts or fruit. A better route would be to make something with amaretto, which is almond-flavored liqueur. Other recipes also often have other fruit juices, particularly pineapple juice.

Years ago when I first started making cocktails at home, Chris got me the Maran Illustrated Bartending book. Although I don't use it so much anymore, it was a great entree into cocktail making, with lots of colorful photos and simple recipes. They do things that cocktail purists don't like: add lime cordial to margaritas, muddle lots of fruit into old-fashioneds and shake their martinis. But there are some fun recipes in this book, and I have long enjoyed their variation of the Mai Tai, which combines the traditional rum and lime with Grand Marnier, amaretto and pineapple juice. The drink is bracingly sweet and tart and less alcoholic than other Mai Tai's. I'd probably significantly up the rum if I was making this now.

Which is exactly what I did for this "Improvised" Mai Tai I came up with while writing this article. Doing this research put me in the mood for the drink, so I tried to satisfy that craving with what I had on hand. Unfortunately, there was no orgeat in the house, or almond milk to make it, but I made do with amaretto and Velvet Falernum. The results were great; not quite as sweet as Mai Tais usually are, but definitely rocking that tart/almond flavor the drink is known for.

Combine rum, orange curaçao, orgeat and lime juice in a cocktail shaker with ice. Shake until very cold. Strain into a rocks glass with ice. Garnish with lime wedge. 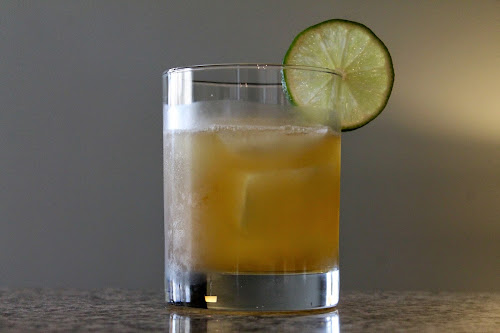 Beachcomber Cocktail - A tiki-style cocktail I like because it's fairly restrained and not as sweet as many other tikis.

Aunt Beru's Blue Milk Brew - A Star Wars-inspired creamy cocktail that actually has a lot in common with tiki cocktails.
Posted by Cook In / Dine Out at 12:00 AM