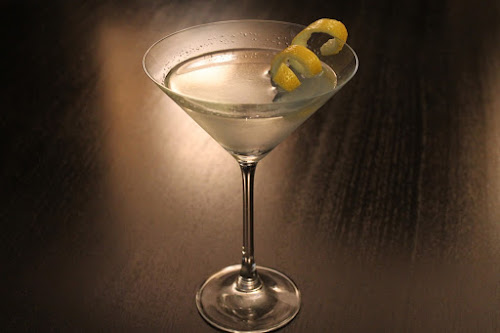 [James] Bond...looked carefully at the barman.
'A dry martini,' he said. 'One. In a deep champagne goblet.'
'Oui, monsieur.'
'Just a moment. Three measures of Gordon's, one of vodka, half a measure of Kina Lillet. Shake it very well until it's ice-cold, then add a large thin slice of lemon peel. Got it?'
'Certainly, monsieur.' The barman seemed pleased with the idea.
'Gosh, that's certainly a drink,' said [Felix] Leiter.
Bond laughed. 'When I'm...er...concentrating,' he explained, 'I never have more than one drink before dinner. But I do like that one to be large and very strong and very cold and very well-made. I hate small portions of anything, particularly when they taste bad. This drink's my own invention. I'm going to patent it when I can think of a good name.'
He watched carefully as the deep glass became frosted with the pale golden drink, slightly aerated by the bruising of the shaker. He reached for it and took a long sip.
'Excellent,' he said to the barman, 'but if you can get a vodka made with grain instead of potatoes, you will find it still better.'

'I would love a glass of vodka,' she said simply, and went back to her study of the menu.
'A small carafe of vodka, very cold,' ordered Bond. He said to her abruptly: 'I can't drink the health of your new frock without knowing your Christian name.'
'Vesper,' she said. 'Vesper Lynd.'
Bond gave her a look of inquiry.
'It's rather a bore always having to explain, but I was born in the evening, on a very stormy evening according to my parents. Apparently they wanted to remember it.' She smiled. 'Some people like it, others don't. I'm just used to it.'
'I think it's a fine name,' said Bond. An idea struck him. 'Can I borrow it?' He explained about the special martini he had invented and his search for a name for it. 'The Vesper,' he said. 'It sounds perfect and it's very appropriate to the violet hour when my cocktail will now be drunk all over the world. Can I have it?'
'So long as I can try one first,' she promised. 'It sounds a drink to be proud of.'

In celebration of National Dry Martini Day today, I'm presenting one of the most iconic drinks of literature and film: The Vesper. It's not to be mistaken for the far simpler usual order of Mr. Bond, the vodka martini, shaken not stirred, although it has some similarities: it includes vodka, although more gin and, notably, it is also shaken.

Intriguingly, it's a drink that's actually impossible to make faithfully. As written, The Vesper is made with the French aperitif Kina Lillet. However, the Lillet company reformulated Kina Lillet in 1986 as Lillet Blanc, a less bitter, fruitier aperitif. Thus making a Vesper with Lillet Blanc will deny the drink it's original bitterness.

Instead of Lillet Blanc, there are many that stand by Italian aperitif Cocchi Americano as a better substitute, since it contains quinine, the bitter compound in tonic water that makes gin & tonic so distinctive. Tasting the two side-by-side, they are clearly very different: Lillet Blanc is tasty but unassuming like a fairly sweet wine wine. Cocchi Americano, on the other hand, has the distinctive bitterness of quinine, which the original drink with Kina Lillet would've had as well. It's up to you which to use, but I went with Cocchi Americano.

Another aspect of this drink that's up for debate is whether to shake it. Sure, it's classic that Bond shakes his martinis, but most cocktail pros suggest that's a no-no. Shaking is for drinks with ingredients that are hard to combine like syrups and fruit juices, but a drink like this that's just spirits should really be stirred. Leo Robitschek, beverage director for The NoMad, is certainly someone who knows what he's doing behind a bar. In this video, he suggests stirring The Vesper, and I'm not going to argue with him.

Combine gin, vodka and Cocchi Americano in a cocktail mixing glass with ice. Stir until combined and cold and strain into a martini glass. Garnish with the lemon twist. Drink while listening to a classic John Barry Bond score.
Posted by Cook In / Dine Out at 12:01 AM