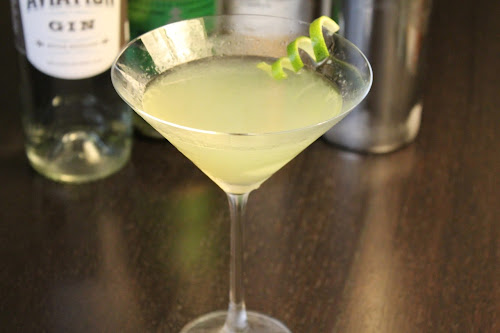 Is it possible to have the last word on the Last Word? Perhaps not. It's a drink that just keeps resurfacing.

I learned about this cocktail via Twitter. What started as a tweet by Barina Craft to mark Aviation Day (August 19), appropriately with the Aviation Cocktail, morphed into a discussion of maraschino liqueur cocktails. After I'd suggested the Aviation Cocktail would probably be really good with Aviation Gin, said gin maker suggested checking out the Last Word. I looked it up and it sounded great.

As far as its history goes, this is a prohibition-era cocktail invented in the '20s at the Detroit Athletic Club, but it wasn't well known until the 1950s when Ted Saucier, a Waldorf-Astoria Hotel publicist, include the drink's recipe in his Bottoms Up cocktail book.

Flash forward another 50 years or so and the drink gets repopularized in Seattle by Zig Zag Café bartender Murray Stenson. According to Wikipedia, the drink became a cult hit and its popularity spread once again. It appears in Jim Meehan's modern classic, The PDT Cocktail Book.

So beloved is Stenson that when he suffered heart problem last year, a fund was formed to help him with medical expenses. Reports in the spring suggest he was recovering well. Surely he'll be back behind the bar again soon. Just like this drink.

The Last Word is wonderfully balanced between being tart and sweet, with just a bit of herbal flavor from the chartreuse. Of course, since they suggested it, I made it with Aviation gin, which has quickly become one of my favorites.

Combine ingredients in a shaker with ice. Shake until very cold and strain into a chilled cocktail glass. Garnish with lime twist.
Posted by Cook In / Dine Out at 12:00 AM