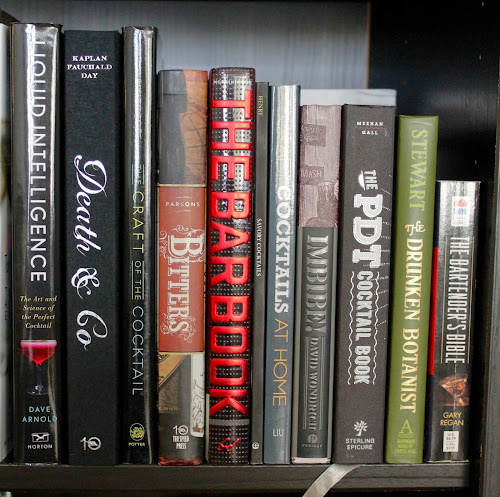 This is Part 3 in a series of three posts on stocking your home bar for 2015 Summer Cocktails Week. See Part 1 on Equipment and Glassware and Part 2 on Bottles.

I've covered barware and glassware and bottles. Those are the tools you need to make and serve cocktails, but you're not going to get very far without recipes and techniques. I've learned so much from my favorite cocktail books. I'm always cracking them open looking for a new recipe or an idea when I'm not sure what I want to make.

And don't discount history. Learning about the past of cocktails has helped me appreciate what makes a great drink. The story of how cocktails emerged in the 19th century and evolved through prohibition, the martini craze and today's craft cocktail movement is an engaging story that says a lot not just about what we've liked to drink but about ourselves and our relationship with drinking. It's no coincidence that in the '80s, a time when convenience foods proliferated, cocktail mixes were big or that today, when people are obsessed with ingredients that are local, organic and quality, that we have a craft cocktail movement that can mirror that obsession.

I've sorted these books into three categories; however, there is quite a lot of overlap here. Many of the books cover technique, for example, and all of them have recipes, but I've put them in the categories for which I think they offer the most value.

Death & Co: Modern Classic Cocktails by David Kaplan, Nick Faulchald and Alex Day. My favorite cocktail book at the moment, this is the companion book to the great Death & Co. cocktail bar in New York's East Village. Last year, I got this book (and wrote about it) and visited the bar (and wrote about that too), and I've been a major devotee to both ever since. The book is large and filled with amazing drinks, both classics and Death & Co. originals. If I decide I want a particular drink, I often look to see how they make it. I also just love thumbing through it to look for new recipes. I've made a lot of drinks from this book, and have loved every one.

The PDT Cocktail Book: The Complete Bartender's Guide from the Celebrated Speakeasy by Jim Meehan. This book is only 4 years old, but it feel like it's been out a decade, since it's been such a big influence for me and many other lovers of contemporary cocktails. This one is also attached to a New York bar, the PDT speakeasy. The recipes are alphabetized rather than categorized, which makes it really easy to find a drink if you know what you want to make. Short blurbs provide trivia, including information about the drinks' origin.

The Bartender's Bible: 1001 Mixed Drinks and Everything You Need to Know to Set Up Your Bar by Gary Regan. Regan, also known as "Gaz" is a beloved figure in the cocktail world. He's done a lot of things, but he's perhaps best known for creating Regan's Orange Bitters and publishing this book, which has the deepest list of recipes of any book on my shelf. This book was published in 1993, so it's a little older than the others (and predates the current cocktail craze), but it's useful for finding obscure recipes.

The Craft of the Cocktail by Dale DeGroff. This book doesn't have the most recipes (although at 500, it's nothing to sneeze at) or the most historical content, but it's just a solid all-around cocktail resource. If you're new to cocktails, I'd actually recommend this as a great place to start over most of these other more specialized works.

The Bar Book by Jeffrey Morgenthaler. A lot of cocktails books open with a section on equipment and techniques but provide mostly recipes. Portland-based bartender Jeffrey Morgenthaler flips that around with The Bar Book, which puts its emphasis on good and proper techniques for making cocktails. That may sound boring to some, but if you're reading this post I hope you find it as interesting as I did (I read it cover-to-cover actually). Along with Death & Co., Morgenthaler has been a major recent influence for me. I read his blog, reviewed this book last year and also visited the restaurant and his cocktail bar where he bartends (Clyde Common and Pepe Le Moko).

Liquid Intelligence by Dave Arnold. Arnold is the bartender at Booker & Dax, the Momofuku collective's bar New York Times calls a "high-tech cocktail lounge." It explores cocktail-making with a similar fresh approach that David Chang applies to his cooking. There's a lot of technique and science in this book, as well as some equipment I doubt any of you have or will acquire, but if you love reading about the science behind what makes great drinks great, this is a fun and informative read.

Craft Cocktails at Home by Kevin Liu. Liquid Intelligence is very interesting, but not always accessible. For that, I recommend Liu's book, which approaches innovative cocktail techniques with a fresh perspective, an open mind and (for the most part) equipment you may have at home or can easily get your hands on. I've had this book a couple years (I reviewed it in 2013), and still use it regularly, such as for making the orgeat I used in this week's Mai Tai. It also inspired my Garden Martini.

Savory Cocktails by Greg Henry. I love how this book came into my life. I read about it, wanted it, and then won it in an online giveaway. And it's fantastic, focussing on cocktails made with savory ingredients, a nice change of pace for drinks so often dominated by sweetness. Read my review from last year. I also enjoy reading his blog, Sippity Sup.

The Drunken Botanist: The Plants That Create the World's Great Drinks by Amy Stewart. I only recently acquired this book, which focuses on ingredients and their origins in drinks (so this could easily slip down to the history list below).

Imbibe!: From Absinthe Cocktail to Whiskey Smash, a Salute in Stories and Drinks to "Professor" Jerry Thomas, Pioneer of the American Bar by David Wondrich. This book focuses on Jerry Thomas, a 19th Century bartender Pete Wells once called "the father of American mixology" for his pioneering work in developing and documenting the craft of cocktail-making, and through Thomas' story, charts the American origins of cocktails. If you want real "old-school" cocktail recipes, this is the best place to find them. Imbibe! was originally published in 2007, and an updated version was just released.

Bitters: A Spirited History of a Classic Cure-All, with Cocktails, Recipes, and Formulas by Brad Thomas Parsons. Parson's fantastic book was invaluable when I was writing my week-long series on cocktail bitters last year. Bitters and cocktail history are intricately linked, as detailed in this book, which explores the subject's history and contemporary revival.

Recipes from These Books

Smoky Frozen Margarita (Liquid Intelligence)
Posted by Cook In / Dine Out at 12:00 AM