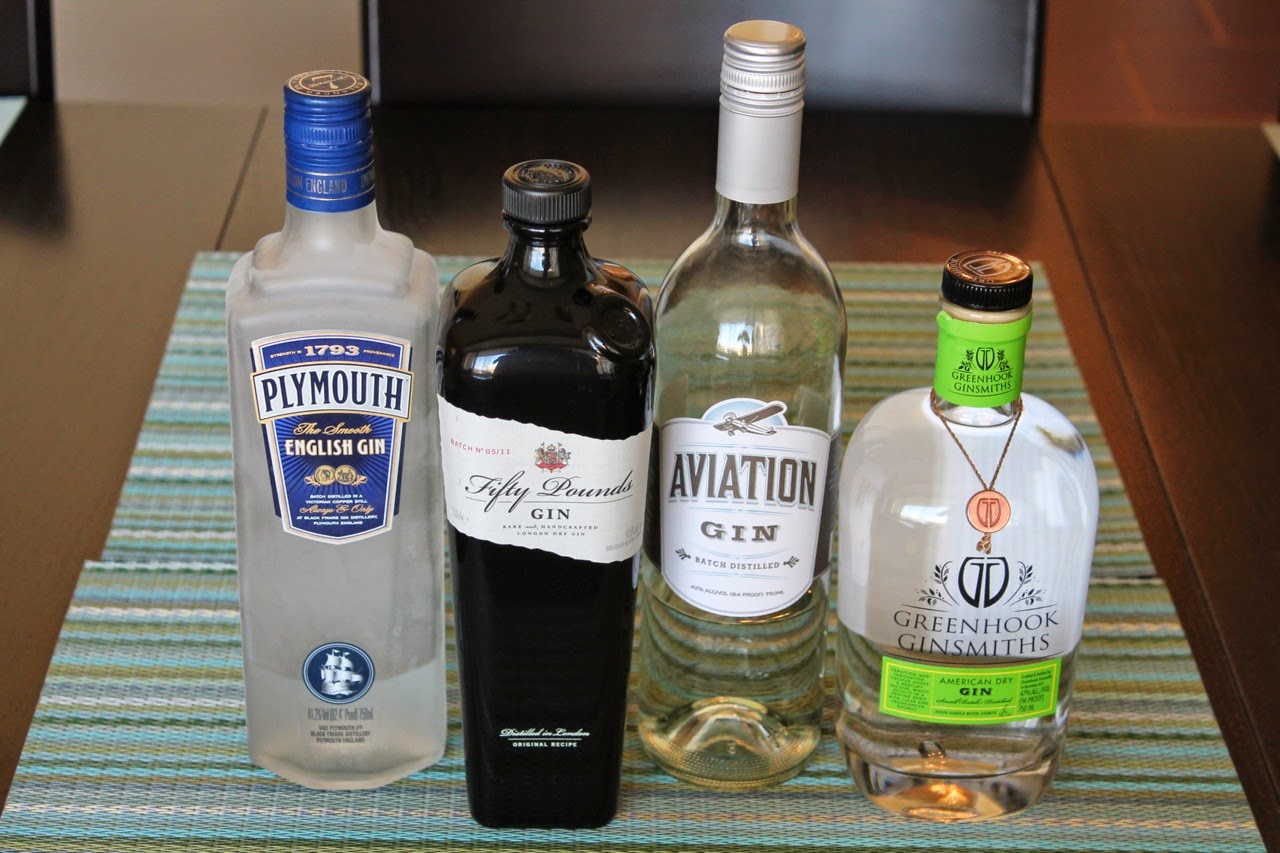 Not wanting to repeat any of last year's choices, I chose Aviation Gin from Portland, Oregon, and Greenhook Ginsmiths Gin from Brooklyn as the American choices. Aviation has a pretty balanced character--like most American gins, it's less juniper forward and more about botanicals (it's worth nothing that Aviation Gin has redesigned its bottle since I bought mine). Greenhook Ginsmiths has more prominent juniper, but definitely also an American botanical profile.

On the British side, I chose Fifty Pounds gin, a London dry gin I discovered one evening at D.C.'s fantastic gin bar, the Gin Joint, which has a very forward juniper profile with some spice, and Plymouth gin, which is a little smoother and nicely balanced (and also redesigned its bottle recently).

I asked Gin Joint bartender Nicole Hassoun to recommend a tonic that was fairly neutral and would work well with most gins. She instantly pulled out a bottle of Fever Tree, already of a favorite of mine, which she said is known for not masking the qualities of gins. I picked some up for this tasting (it's available at many grocery stores, including Giant and Whole Foods).

All of the gins were mixed in 1:2 concentration with Fever Tree tonic and a squeeze of fresh lime. Here were the results:

Greenhook Ginsmiths American Dry Gin - This gin plays well with the lime. There's a bit of spice but not too assertive. Very clean. Both of us really like this one.

Aviation Gin - Claims to move away from "overabundance" of juniper in favor of a more botanical profile. Chris was reminded of D.C.'s Green Hat gin, which is assertively botanical, although Aviation's flavor profile was not as pronounced. The juniper is there, but plays a supporting role to the botanicals. It also has a more pronounced bitter taste than the Greenhook. I don't dislike this gin. For this style, I actually think it's rather good; however, it wasn't our favorite.

Plymouth Gin - This gin has a cleaner taste, even a little sweet. It was Chris's favorite so far. I detected a bit more bitterness than with the Greenhook Ginsmiths, but it was still pretty smooth and definitely balanced.

Fifty Pounds Gin - This gin was also really good, and a little more assertive than the Plymouth. Chris loved it (he's clearly a fan of the British gins). It has a nice juniper flavor, but other flavors too: a little spice, a little botanical, a little bitter, but not too much. All around a very good choice, besting Plymouth by just a hair.

Overall
In the end, we agreed we liked both of the British gins better than both of the American ones, so Fifty Pounds Gin is easily the champion of this contest. That said, we liked all four of these gins and I wouldn't hesitate to recommend any of them for a good, refreshing gin & tonic.

I like my gin & tonic made with a 1:2 ratio of gin to tonic. For a rocks glass, that generally translates to 1 1/2 oz. of gin and 3 oz. of tonic water. Sometimes I up the tonic to 4 oz., but this is about the radio I prefer. A bottle of Fever Tree tonic is 6.8 oz., so it's perfect for making two drinks. I also like to squeeze the lime wedge and drop it into the glass. Gin & tonics should be stirred just lightly to mix the gin and tonic but not too much or the tonic will lose its carbonation.

Combine gin and tonic water in a rocks glass with ice. Squeeze lime over drink and drop in. Stir lightly to combine.
Posted by Cook In / Dine Out at 12:00 AM