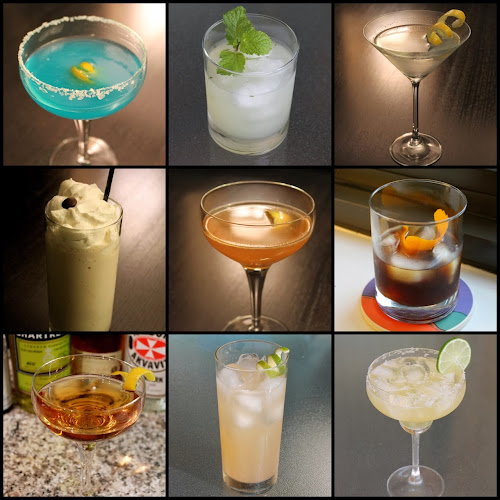 Looking back on 2013, there are several key themes that emerged in my cooking: working with the seasons, learning the classics and experimenting creatively, all of which played out in the cocktails I featured on Cook In / Dine Out this year. Here were the highlights:

In the winter, I turned to dark spirits like whiskey and bold flavors from Italian amari, nut liqueurs and grapefruit. The Rye in January is an elegant rye drink with the herbal-cinnamon Czech liqueur Becherovka, grapefruit and Italian Cynar. Enchanted by the idea of a winter forest, The Woodsman combines smoked whiskey with walnut liqueur, sweet vermouth and a homemade rosemary-brown sugar syrup. I featured a pair of classic Drambuie cocktails perfect for winter: a '70s-era Prince Edward and locally sourced Tabard cocktail (named after D.C.'s Tabard Inn). For a guilty indulgence, I made The Siberian, a vodka and Kahlua milkshake.

As the weather warms in spring, I was inspired by brighter flavors like herbs and citrus, even vegetables. Spring in Glass combined mint, cucumber and fennel, the latter coming from D.C.-based Don Ciccio & Figli's Finocchietto, a fennel liqueur.  For Cinco de Mayo, I came up with the Margarita on Fire, a spicy/smoky concoction of mezcal, tequila and habanero shrub.

I kicked off summer with a whole week of cocktails. It included the Teagroni, a tea-based Negroni from Kevin Liu's Craft Cocktails at Home; a Summer Cosmopolitan with gin and fresh ingredients; and two smoky Mezcal cocktails that originated in New York's Mayahuel Mexican cocktail lounge. An experiment with cocktail foams resulted in the herbal Garden Martini. The flavors of Thai cooking were the inspiration for the Bangkok Breeze, featuring basil, rum, ginger and coconut. For my friends' wedding, I created a refreshing summer punch, The Lady Lawyer, with gin, mint and lemon.

Fall finds drinks inspired by the harvest as well as the coming chill of winter. Roasted tomato simple syrup was the key ingredient in my Smokin' Hot Tomato, featuring mezcal, Grand Marnier and habanero shrub, and Tomato at Night, which included (legal) moonshine, Aperol and lemon. For Thanksgiving, I came up with the (Wild) Turkey and Cranberry, a potent and festive (aren't they the same, when you're talking cocktails?) mix of whiskey, Aperol and cranberry bitters. A trio of cocktails made good use of apple brandy, including Jeffrey Morgenthaler's Norwegian Wood and Washington Post cocktails columnist Carrie Allan's modernized Scotchem.


The Show Must Go On

Entertainment continued to be a rich source of inspiration for original drinks. Following last year's ever-popular Happy Endings-themed Whore's Bath, I created another cocktail for a departing show: The Heisenberg, consisting of whiskey, Becherovka, maple, lime and habanero. Dallas Decoder and I teamed up for another series of Dallas-themed drinks, including The Drew, a sophisticated mix of mezcal, Grand Marnier, Cynar, habanero and flamed orange peel, and The Judith, a rightfully bitter mix of gin, Chartreuse, grapefruit shrub and angostura bitters.

The cocktail highlight of the year were my Oscar cocktails: a series of 10 drinks honoring the year's 9 Best Picture nominees plus a bonus drink for Skyfall, a twist on the classic James Bond martini that nods to elements of the film. My favorite were the Life of Pi, which illustrates beautifully the bold visual style of the film, the Django Unchained, a fiery, irreverent take on Mint Julep, and The Argo, which represented the Best Picture winner with Canadian whiskey and Middle Eastern-inspired spiced syrup.

Early in the year, D.C. bartender Derek Brown wrote a piece for Table Matters arguing for bartenders to spend more time with classic drinks. "For every cocktail you create, try learning nine classic cocktails first," he said. Although I didn't quite achieve that balance, I did make an effort to learn classic drinks, including their history.

Take the Last Word, a gin and chartreuse cocktail from the prohibition era that made a comeback recently due to Seattle bartender Murray Stenson. Former Washington Post spirits columnist Jason Wilson honored D.C.'s signature cocktail, the Rickey, with his Nice Rickey. The Singapore Sling, an oft maligned cocktail, is actually rather good when made with quality, fresh ingredients. I also had fun making The Vesper, the classic James Bond vodka and gin martini.

A few other classics everyone should try: Mojito, Mint Julep and Gin & Tonic, the latter of which gave me a chance to taste a number of American small-batch gins (plus drink a lot of G&Ts, my favorite cocktail).
Posted by Cook In / Dine Out at 12:00 AM

Email ThisBlogThis!Share to TwitterShare to FacebookShare to Pinterest
Labels: Best of 2013, cocktail, recipe