Surely if you watch ABC's Happy Endings you'll agree with me that it's currently the funniest show on network television. I've come to really love the increasingly ridiculous antics of the Chicago-based sixsome of Brad, Jane, Alex, Penny, Max and Dave.

In a recent episode, Dave, a food truck entrepreneur, decided to open an evening speakeasy, serving creative cocktails out of his Steak Me Home Tonight truck. He served his friends a drink he called a Whore's Bath (which Penny immediately thought was a comment about her).

What could the drink be? The only clues offered in the show were that it was a gin-based drink and judging from the looks of the drinks the gang was sipping from Dave's mason jars, it was colorless but cloudy and on the rocks. So gin, of course, went in first. To live up to its name, I wanted something tart but refreshing, which steered me toward citrus flavors. For some extra character--as well as a bit of deviousness--I included some Benedictine liqueur, the sweet, herbal liqueur produced by Benedictine monks with a super secret recipe. This also substitutes for the turpentine Dave said was in the drink which, in real life, is a poison. 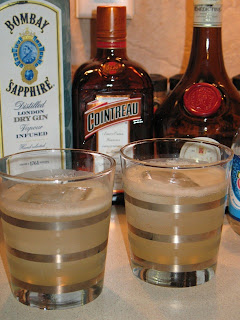 Shake gin, Benedictine, Cointreau and grapefruit juice with ice. Pour into rocks glass with ice and top with club soda.
Posted by Cook In / Dine Out at 4:33 PM