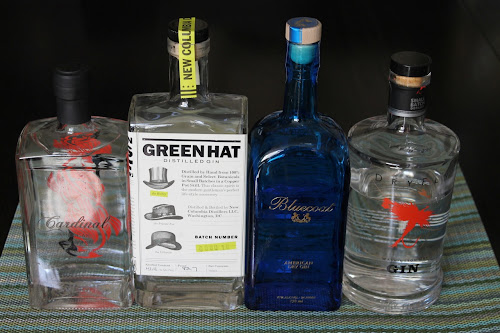 Gin is an undeniable classic, and it's getting a modern makeover by American small-batch distillers pushing its typical juniper-botanical flavor profile in new and interesting directions.

We recently sampled a selection of gins by small American producers and were struck by how different  they were, each with a unique taste.

Our sampling was done with our favorite household cocktail: the classic Gin & Tonic, a simple, refreshing drink that's welcome at every season. Each gin was paired with Fever Tree tonic (in a 1 gin to 2 tonic ratio) and a little squeeze of fresh lime juice stirred with ice.

Dry Fly Washington Dry Gin, Dry Fly Distilling, Spokane, Wash.
The drink made with Dry Fly had a clean taste with fruit notes. The gin played well with the lime, almost like tequila. The bitterness came forward as we drank it, but it was still quite a pleasant G&T.

Bluecoat American Dry Gin, Philadelphia Distilling, Philadelphia, Pa.
After Dry Fly this taste more like a typical gin, with stronger spice notes. While drinking Dry Fly I noticed the lime more. With Bluecoat, it's the tonic that was more obvious. Although I liked both gins, I think I prefer the Bluecoat just a bit, since I gin with a spicier botanical profile.

Green Hat Distilled Gin, New Columbia Distillers, Washington, D.C.
Strongest odor. Unusual taste--hard to pin down. I'd say it's almost grainy, while Chris says it tastes like candy and added that he liked it the least. More similar to Dry Fly than Bluecoat. While not bad, there's something "off" about it that I can't quite put my finger on. I read that some have suggested it smells and tastes like buttered popcorn, which Chris agreed with.

Cardinal American Dry Gin, Southern Artisan Spirits, King Mountain, N.C.
Cardinal gin has a bit of vegetable flavor; like cucumber, Chris suggested. Among these gins, it had the most pronounced juniper flavor and a nice slightly minty aftertaste. Definitely a nice gin.

Summary:
It's a difficult choice to name a favorite. Sadly, I can't say it's Green Hat, which I was hoping to love since it's homegrown, but it's unusual flavor made the G&T a little off-putting (I do hope to find a cocktail that will showcase it). Although I liked all the other three, I'd probably pick Bluecoat as my favorite, while Chris said Cardinal's cucumber flavor made that spirit his pick. We both chose Dry Fly as a close second.

Combine gin and tonic water in a rocks glass with ice. Squeeze lime over drink and drop in. Stir to combine.
Posted by Cook In / Dine Out at 12:00 AM