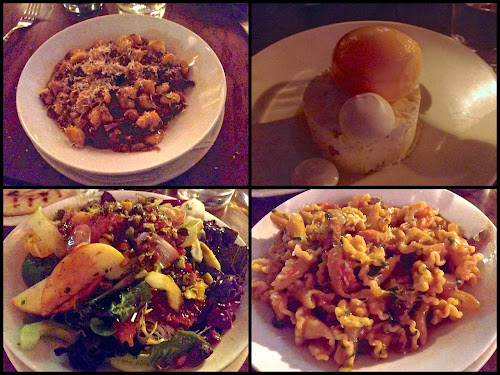 Few dishes excite me like the prospect of a really good pasta. Perhaps that's why I'm instantly smitten with Casa Luca. The casual cousin of Chef Fabio Trabocchi's fabulous downtown Italian restaurant Fiola puts its selection of pasta dishes front-and-center on its menu.

When we visited Fiola last year, my favorite dish was the lobster ravioli, served with a generous helping of the ruby crustacean. The pastas at Casa Luca are no less exciting and no less generous.

Agnolotti comes filled with a spicy-smooth puree of kabocha squash paired with walnuts, brown butter and, in an interesting move, artichokes. The campanelle all'amatriciana is bathed in a luscious tomato sauce with thick pieces of guanciale.

Best of all though is the smoked potato gnocchi with duck ragu. Its smokiness is perfectly balanced with the meatiness of the ragu, and the gnocchi have just the right texture. Chris ordered this, but I swiped more than my usual share of bites from his plate because it was so good. I recommend an order of grilled crescia--a lard-enriched flatbread--to help sop up all the wonderful pasta sauces.

Although pastas dominate the menu, Chef de Cuisine Erin Clarke oversees a short selection of fish and grilled meat dishes, plus a rotating selection of weekday specials. Although less expansive than sister restaurant Fiola's menu, Casa Luca's menu is easier on the wallet. Except for dishes meant for two, Casa Luca's entrees range from $18 for the fusilli pasta to $36 for the filet mignon, about $10 less than similar offerings at Fiola.

In addition to breads, the restaurants lengthy list of antipasti includes salumi, cheese, "piccoletti" (little bites) and salads. My favorite salad is the misticanza, a vibrant mix of winter greens, apple, grapefruit, oranges and pistachios. Burrata arrives at one meal with roasted tomatoes and basil like a richer winter version of summer's favorite caprese. At another meal, it's served over radishes and garnished with an olive-mushroom tapenade.

A bottle of wine to wash down those pastas won't set you back much at Casa Luca. All of the selections available by the glass at $13 can be had by the full bottle for $28. It's a nice selection of Italian whites and reds. We sprang for a cabernet, merlot and sangiovese blend from Umbria that worked well with both our pastas.

By the time you eat through all that pasta, you might be tempted to pass on Pastry Chef Tom Wellings' varied creations. But maybe you could split one? They're certainly good. His cake-and-ice-cream combos like hazelnut coffee cake with caramel gelato and bread pudding with pumpkin gelato both hit the spot. Chris and I were a little too full to enjoy one those, so we sprang instead for the Sicilian Cassata: a tart-sweet combination of pistachio and orange semifreddo with grapefruit sorbet and a few mini vanilla meringues.

Although downtown is already host to a number of great Italian restaurants, Casa Luca is a welcome addition on the more casual end of the spectrum, especially for its excellent homemade pastas.