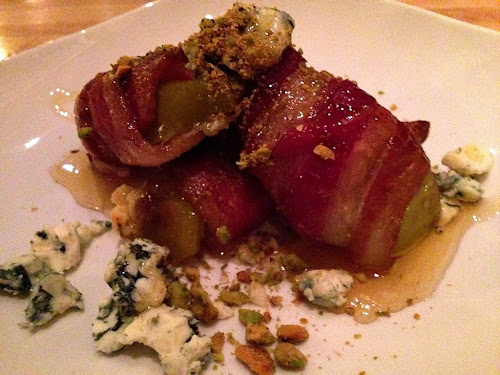 There are so many new restaurants on 14th Street; who can keep up? Apparently not me. Of the many new openings this year, I've only managed to write about Le Diplomate. I know there are some great places there, although to an extent, it also feels like a lot of hype. In a few years, how many of these places will still be standing?

That's perhaps why I find myself drawn to the Logan Circle restaurants that have stood the test of time. Admittedly, that's not a very long span. Anything older than a year on 14th Street feels old, making places like Birch & Barley, which opened in 2009, feel positively ancient. In that context, The Pig has settled nicely into adulthood.

Opened a year-and-a-half ago (in May 2012), The Pig is refreshingly casual in a city where new entrants chase "upscale chic" or "expensive hipster" motifs. Simple wooden booths with leather cushions are nestled along walls of weathered wood siding and white subway tiles. The restrooms are proudly plastered with pig-related media. The restaurant has an inviting, welcoming look that doesn't feel like it's trying to hard, but rather says "plant yourself here and enjoy some good food and drinks."Sounds like a plan.


And good food is generally what we've had from The Pig. As its name promises, pork is the main attraction. The best I've sampled is the Hickory BBQ, a plate of hickory-smoked pulled pork shoulder doused in spicy vinegar sauce and served with a brilliant truffled mac & cheese. The red cabbage slaw that also comes with it was fine, but the least interesting player in this trio.

Bacon wrapped apples (pictured at top) were as tasty as they are beautiful to look at. The smoky-sweet appetizer was served with pistachios, blue cheese and honey. One of the better non-pork dishes we've had at The Pig is their sweet potato soup, pureed super smooth and served with a nice swirl of balsamic vinegar.

Great porky dishes are also available for brunch and lunch. When we visited in the summer, I greatly enjoyed the gruyère waffle with ham, pork belly and sunny side up egg. The egg arrived more over-hard than sunny-side-up, but the pork belly was wonderfully smoky and a bit peppery. A touch of espresso added a nice bitterness to the syrup. The pork cutlet sandwich with gruyère, shaved onion, pickles and mustard was also tasty, although a bit over-breaded, and served with salty-herbed potato chips that we couldn't stop eating.

One of the few disappointments was the goat cheese gnocchi with bacon, sausage, tomatoes and peppers. We thought the the sauce was fine, but rather pedestrian in flavor. And the gnocchi weren't as pillowy light as you can get at Italian restaurants. Based on that, I'd stick with the restaurant's Southern-leaning fare.

As the dozens of new restaurants on 14th Street continue to vie for "latest and greatest" status, it's nice to know that The Pig aims for comfort and consistency, a place where you can dine on the restaurant's moniker without feeling like one.