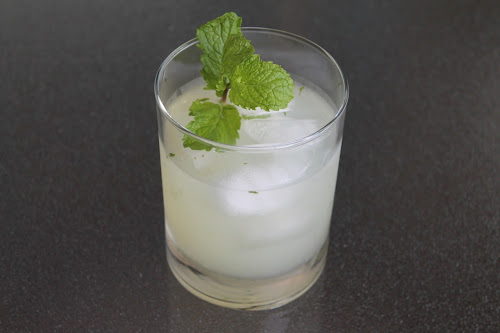 One of my closest friends got married recently. It was a beautiful affair in her fiancé's (now husband) parents' backyard in suburban Cleveland. There were lots of personal touches throughout the ceremony and reception, including one I was responsible for: the signature cocktail.

Coming up with a cocktail for the wedding was a great honor and also a challenge: I had to create something somehow symbolic of the occasion and make it on a much larger scale than I'm used to. Generally, I make two drinks--one for Chris and one for me--or maybe four if we have guests. Something that could serve 100 people is a bit different. But "size matters not" as Yoda says, so dive in I did.

Since it was an outdoor summer wedding, I thought a punch would be appropriate: something tart and refreshing in case it was really hot (as it was, the weather was about as perfect as possible). After consulting with the bride-to-be, I settled on a lemonade-based drink with ginger liqueur and mint.

The spirit proved to be more challenging. Originally, I conceived this drink with rum, but I was never completely sold on it. After testing it also with vodka and gin, it was clear that gin was the best choice. The rum overpowered the other ingredients, while the vodka just kind of faded away. It was the gin that pulled it all together. There was a catch though: said bride has insisted in the past that she doesn't like gin--yet, I've served her several gin cocktails over the years and only tell her what's in them after she declares "mmm, this is good!"

To make the drink on a large scale, we used a serving container with a spigot and an infuser for the mint. I mixed the drink in the kitchen, careful to scale up the proportions.

In the end, the proof that it was a big hit was that it was "sold out" before cocktail hour was over, and even the bartender told me it was a good drink. For a food and cocktail blogger to bomb the signature cocktail at an event like that would have been a major disgrace. Whew.

For this home version, I was able to add some additional symbolism with a mix of gins: Dry Fly from Washington state, where my friend and I met and attended college; Green Hat from Washington, D.C., where we've lived and been close friends (and, for awhile, roommates) for many years; and Aviation from Portland, Oregon, where I'm from and she (and her wonderful new husband) are now moving to.

This recipe is enough to make two drinks. Since it's a wedding cocktail, it's meant to be shared with someone else.

Oh, and the name? That's an inside joke between me and the bride. Maybe someday we'll share it with you.

Add the mint leaves and ginger liqueur to a cocktail shaker and muddle. Add ice, gin and lemonade. Shake until well mixed and cold. Strain into a rocks glass with ice. Garnish with a mint sprig.
Posted by Cook In / Dine Out at 12:00 AM