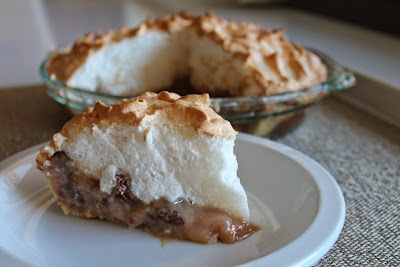 Pecan pie is a Thanksgiving staple, and the basic formula is pretty much the same in most recipes: combine eggs, corn syrup, sugar, butter, vanilla extract and pecans. Place in pie crust and bake. So synonymous with pecan pie is Karo's corn syrup that a recipe for the pie appears on the bottle.

But while making pecan pie with corn syrup may be traditional, it isn't the original method. In Dan Jurafsky's The Language of Food (yes, back to that again, it's a great source for inspiration), he writes about regional differences in the pronunciation of "pecan" (basically whether you say it "pih-CON" like I do or "PEE-can" like many southerners do), and notes that the earliest recipes for pecan pie originated in Texas dating back to the late 19th century. They did not contain corn syrup, and were more like custard pies. 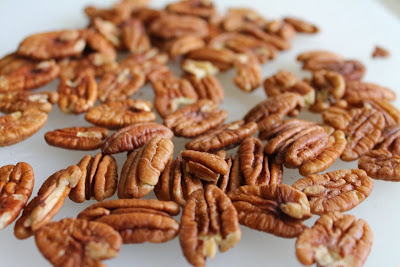 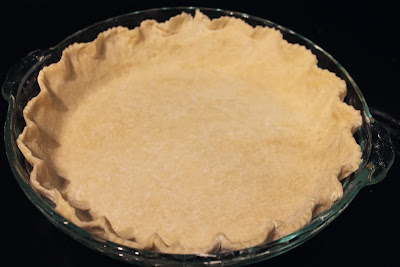 Jurafsky cites the recipe as appearing in the Ladies Home Journal. I tracked down the following slightly older recipe (apparently by the same author) that appeared in the Dallas Morning News, January 23, 1898 (courtesy of The Big Apple):

"Tiaga, Grayson Co., Tex., Jan. 21.—(To The News.)—Knowing that The News is strictly for Texas and for Texas enterprises, and thinking that it might be of interest to many Texas kitchen queens, I herewith inclose you a copy of the recipe for making what I have decided to call in honor of the great Lone Star state, “The Texas Pecan Pie.”

Having never seen it in any paper or cook book I have read, and failing to find any one who had ever eaten it, I feel justified in claiming to be its originator and the right to christen it.

It is a most delicious pie—an instant favorite with all who have eaten it at my table. It is my desire that it may be added to the long list of delicacies Texas cooks are so greatly noted for preparing, and I want every lady to test its merits and I will be glad if they let me know of their success or failure in making it.

The Texas pecan pie—One cup sugar, one cup sweet milk, one-half cup pecan kernels chopped fine, three eggs, one tablespoonful flour. When cooked spread the well-beaten whites of two eggs on the top, brown and sprinkle a few of the chopped kernels over it. Above is for one pie.
MRS. MATT BRADLEY." 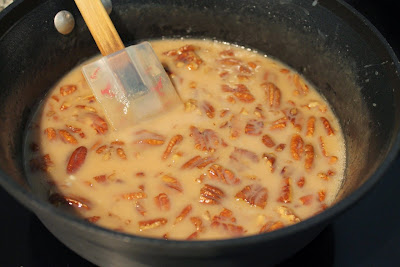 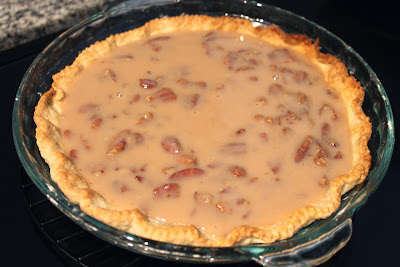 Like a lot of old recipes, it's not particularly easy to follow, especially for the un-initiated. There's no hint as to how long to bake it or at what temperature (I guess back then, home cooked were considered more skilled and should know such things). Thankfully, the A Book of Cookrye blog has translated this recipe for the modern age. She had omitted the meringue topping, which I have decided to add back. I've also included a pie crust recipe, courtesy of America's Test Kitchen.

If you make this for Thanksgiving, I suggest making it the day of, since the meringue isn't quite as perky on day two (although it still tastes really good). 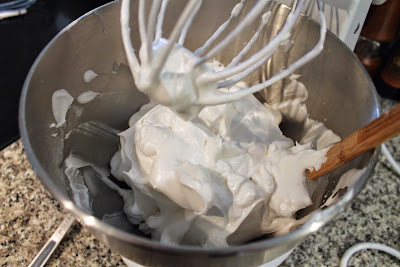 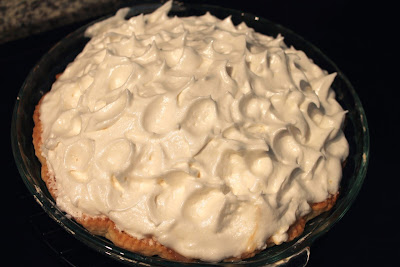 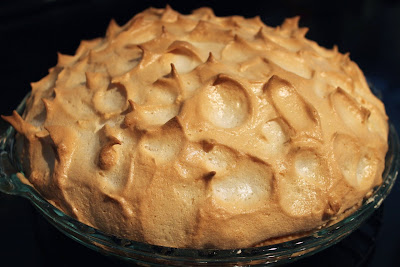 1. Add flour, sugar and salt to a food processor fitted with a steel blade and pulse a few times to combine. Cut the butter into 1/2-inch cubes and scatter across the flour. Pulse for 10 to 15 seconds until the mixture resembles coarse cornmeal.

2. Transfer the mixture to a medium bowl and sprinkle with 3 tbsp. of ice water. With a folding motion, use a rubber spatula to mix the ice water with the flour mixture, pressing with the spatula until the dough sticks together. If the dough does not come together, add additional ice water in 1-tsp. increments until it does. Shape the dough into a flattened disc and wrap with plastic wrap. Chill for at least 1 hour (up to 2 days).

3. Place the chilled dough on a floured rolling surface and roll the dough out to a 13-inch diameter. Carefully transfer the rolled dough to a pie plate, pressing the dough into the corners. Trim away the edges of the dough, leaving a 1/2-inch overhang, then fold that overhang under so the folded edge is flush with the top rim of the pan. If desired, flute the edge of the dough, then chill the dough again until firm, about 1 hour.

4. Preheat oven to 400 F with oven rack in the center. Remove chilled dough from the refrigerator. Prick the bottom of the dough a few times with a fork (this is to allow air to escape to prevent the dough from puffing up). Bake the crust for 20-25 minutes until it is lightly browned. Look at it every 5 minutes and gently press down the bottom with an oven mitt if it puffs up. Remove from oven and set aside.

6. In a medium bowl, whisk together the sugar and flour, then whisk in the milk and eggs until well mixed. Stir in the pecans. Transfer to a saucepan and heat over medium-low heat, stirring frequently, until the mixture is thick enough to coat a spoon and reaches a temperature of 160 F to 170 F.

7. Combine cornstarch and water in a small saucepan. Bring to a simmer over medium heat, whisking occasionally. When the mixture starts to simmer and turns translucent, remove from the heat. Let cool.

8. Using a stand mixer with the whip attachment or a hand mixer, beat the egg whites and vanilla until frothy. Combine the sugar and cream of tartar and beat into the egg white 1 tbsp. at a time until all the sugar is incorporated and the mixture forms soft peaks. Add the cornstarch mixture and continue beating until the mixture forms stiff peaks.

9. Pour the pecan mixture into the pie shell. Using a spatula, spread the meringue over the mixture, being sure to seal the edges of the meringue against the top of the pie crust. Using a spoon to create little peaks all over the meringue. Bake the pie until the meringue is golden brown and jiggles only lightly, about 25-30 minutes. Remove from the oven and set on a wire rack to cool. Serve immediately (meringue pies are best the day they are baked).

Apple Pie with Vodka Crust
Posted by Cook In / Dine Out at 12:00 AM