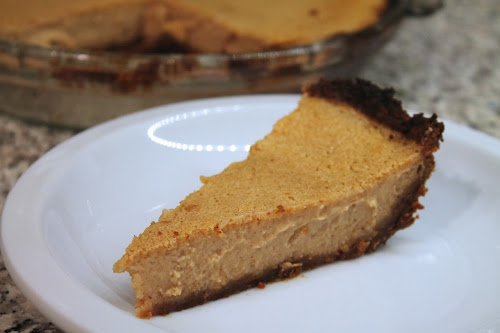 I love apple pie. I also love pumpkin pie. If I had to make just one for Thanksgiving, it would be hard to choose. Here's my attempt at having it both ways: an apple pie with the texture of pumpkin pie. Intrigued? 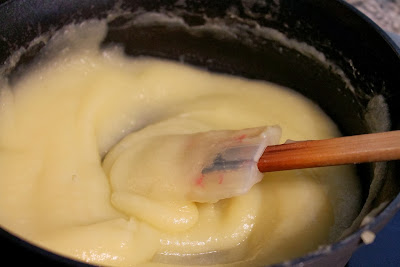 This apple custard pie takes the technique of pumpkin pie but substitutes apple puree for the pumpkin. To make it even more interesting, instead of a traditional crust, I used gingersnap cookie crumbs. 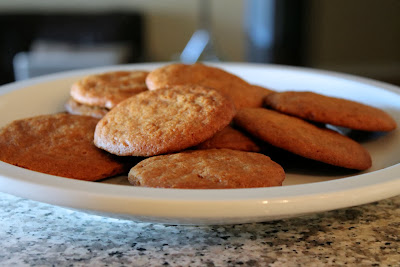 I love the texture of this pie. It's like eating pumpkin pie but with the brighter taste of apple. Plus the ground apple retains just a bit of crispness. 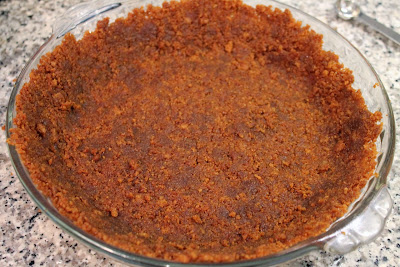 For the pie technique, I relied on America's Test Kitchen's recipe for pumpkin pie, which I've made before (and loved). The apple puree is pretty much like making applesauce except without any added sugar or spices. 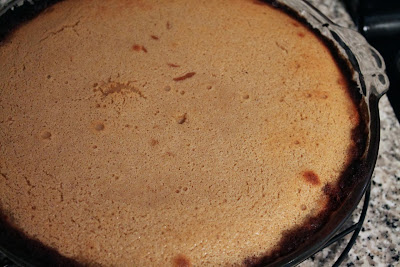 2. Heat a large saucepan over medium-high heat. Add apples and 1/3 cup water. Cover and cook until the mixture boils. Reduce heat to medium-low and simmer until the apples are very soft, about 15 minutes. Transfer to a food processor and puree until very smooth. Transfer mixture back to saucepan and cook over medium-low heat, stirring frequently, until mixture is thickened (it should be as thick as pumpkin puree). You should have about 2 cups (16 oz.) of puree (don't fret if you have a little less). Set aside.

3. Break the gingersnap cookies into large chunks. Pulse in a food processor until ground to crumbs (there should be no large chunks). Transfer to a bowl. Add the melted butter and stir with a fork until combined. Transfer the mixture to a pie plate. Using your fingers, press the buttered crumbs into the bottom and sides pan. Be sure there are no thick spots, especially where the bottom meets the side. (Note: some recipes instruct you to bake the prepared crumb crust before filling it. I did not do this, as I didn't want the crust to get too crisp. If you choose to bake it, see this article on crumb crusts).

4. Combine apple puree, brown sugar, cinnamon, ginger, nutmeg and salt in a large saucepan over medium heat. Once the mixture begins to sputter, cook, stirring constantly, for about 5 minutes. Add the milk and heavy cream and cook until the mixture simmers.

5. Add the eggs to a food processor and turn on. With the machine running, add half the hot apple mixture through the feed tube. Process for about 30 seconds then transfer the apple-egg mixture to the pot with the remaining apple mixture and stir to combine. Pour the hot mixture into the prepared cookie crust. Bake until the filling is puffed and dried out on top, about 25 minutes. Cool on a wire rack then refrigerate. Serve chilled.
Posted by Cook In / Dine Out at 12:00 AM