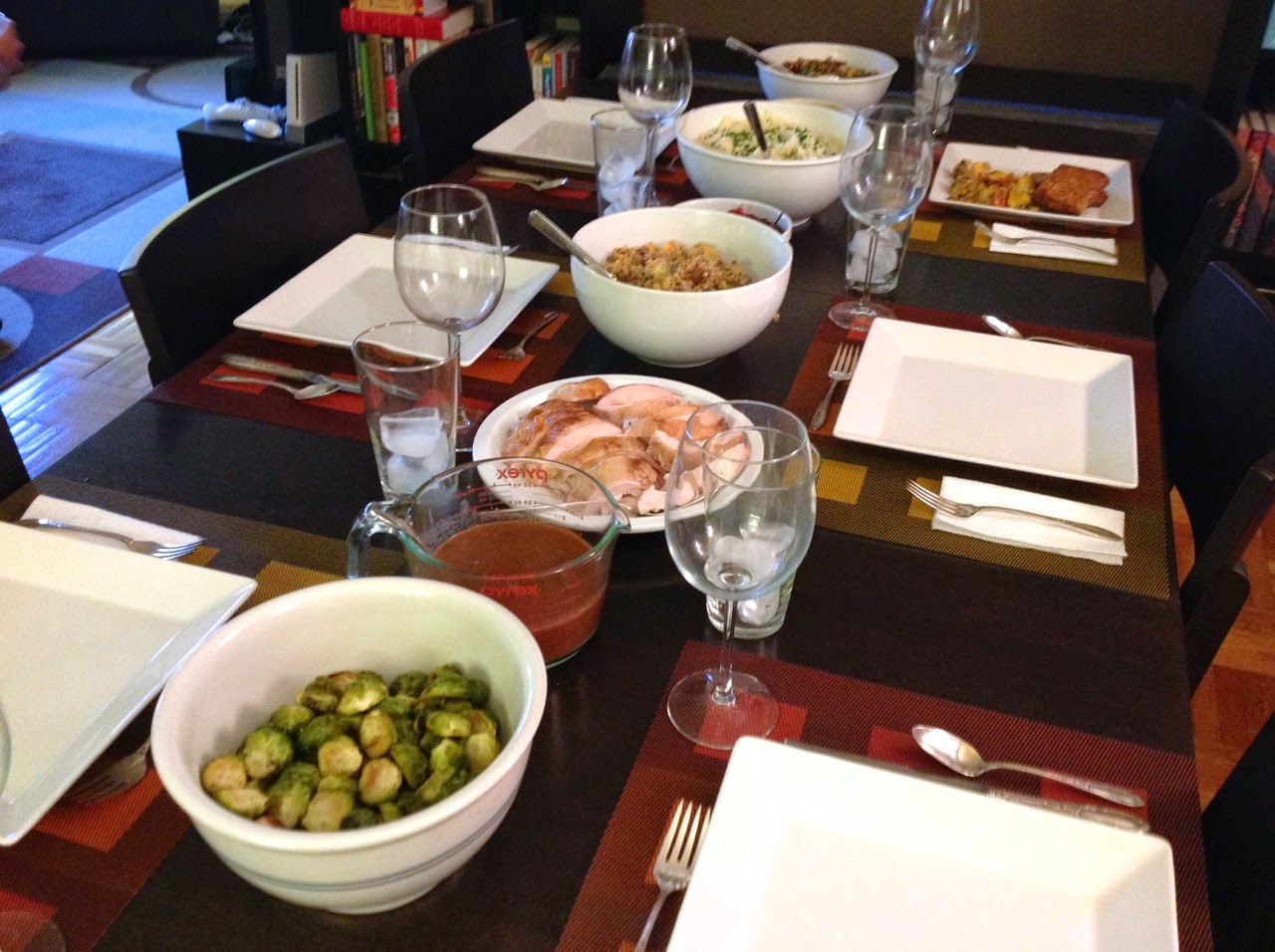 I'll be honest. Pulling off Thanksgiving dinner isn't easy, nor can it be done "effortlessly" as some articles may promise. But it's also not impossible. With advance planning, you can pull off a Thanksgiving dinner efficiently, without breaking the bank, that's fun and memorable.

This year will be my 15th year in a row making the dinner for my husband and me. Around our table, we've had as few as two (just us!) and as many as six diners. So I'm generally used to making smaller Thanksgiving dinners. If you're doing something much larger, your experience will, no doubt, be different than mine. Over the years, I've learned a few things to make the experience go more smoothly. Here are my 10 tips for planning a successful Thanksgiving dinner a success.

1. Plan a general quantity of food and err on too much. First, how many are coming? That's going to dictate a lot of what follows. If you're having a smaller gathering (i.e. 4 or less), a turkey breast and a few sides will be enough food. Larger parties will call for more. It's hard to set standards when it comes to food quantities, since everyone eats differently (although, given that it's a holiday, expect people to eat more than usual) and there aren't standard sizes for most dishes, as they can all scale up or down. I say always err on making too much. That way, you'll produce leftovers, and isn't that a part of Thanksgiving too? Some general rules are 1 to 1 1/2 lbs. of turkey per person, a pie makes about 8 servings (all don't expect people to have only 1 serving, please) and a bottle of wine pours 5 glasses (and again, except for kids and designated drivers, there will be multiple glasses per person). Food network has a nice estimator for smaller parties (4 to 16 people); Dummies has a nice variety of tables scaled up to larger parties (25 or 50 people).

2. Account for your time, skill and resources. Now that you've estimated the amount of food you'll need, think about how you'll get it done. If you've only got the holiday itself to cook, you're not going to be able to do everything from scratch (unless, possibly, you're cooking for a very small party, but even then it's going to be a very hectic day). In such case, I would suggest buying the desserts, asking guests to bring salads, and focus mainly on the turkey and key sides (potatoes, stuffing, gravy, and a couple of vegetables). If you're able to also cook the day before, that gives you a whole lot of time to prepare some dishes in advance and being prepping others (desserts, cranberry sauce, brining the turkey, cutting up vegetables, etc.). Because Thanksgiving is on a Thursday, using the weekend before often isn't very helpful unless you have a lot of freezer space. If you're not someone who cooks a lot, Thanksgiving isn't the time to start. That's a recipe for major stress as well as potential accidents. It's fine to take shortcuts--everyone does. If you are a skilled cook, remember not to overdo it. You should get to enjoy this day too without collapsing. Finally, all this food doesn't come without cost. If you have a limited budget, consider that a lot of Thanksgiving dishes can be made simply with inexpensive ingredients, and guests are often willing to help out by bringing a dish or bottle of wine (if they bring a dish, consider asking them to bring something that doesn't require reheating in your oven, which is probably going to be tied up with the dishes you're trying to finish).

3. Consider guests' needs. Think about your guests' particular dietary needs or desires. Would they prefer something traditional or welcome experimentation? Are there vegetarians or vegans? Does anyone not eat something due to health, diet or religious reasons? While I don't think it's necessary to ensure that every person can enjoy every dish on the table, I do think it's important to not invite someone who will then end up eating very little because you didn't consider their needs. If you're not sure, ask. Potential hurdles: meat (including turkey and bacon), alcohol, nuts, anything diary (including butter) and bread or flour.

4. Decide on a centerpiece dish. Roasted turkey is the default, and I've offered several recipes for a brined style (such as mole or smoky maple) or herb-roasted turkey breasts. For those that aren't into turkey, a ham or brisket would also make a nice centerpiece. Although a vegetarian meal could be made by stringing together a bunch of sides, I still think it should include some sort of focus dish, like  Marinated Broiled Tempeh, a simple, flavorful dish.

5. Balance the side dishes. There are some dishes people will miss if they aren't there: mashed potatoes, gravy and stuffing instantly come to mind. Biscuits are also very popular at our house. Add all that up and you have a lot of heavy carbs. I like to balance them out with plenty of vegetables, such as roasted sides (Brussels sprouts) or salads. The sides offer opportunity for variety and creativity. Did you make basic mashed potatoes last year? Maybe this year try them with roasted garlic, parmesan or fresh herbs. Give stuffing a new life with a theme such as Southwestern or Italian. If there are pecans in the stuffing, maybe choose a different nut to go with the green beans, like almonds. An abundance of color and flavor will make a more interesting meal.

6. Select the desserts. Pie is, of course, traditional. Pumpkin and apple (my favorite) in particular work very well, and pecan is another winner. But other dishes work too, like a pumpkin tart. It's nice to serve dessert with a little something extra like ice cream or whipped cream.

7. Choose your drinks. Pairing wine with Thanksgiving dinner is a little different than the usual game. Fruity, lower alcohol and less assertive choices generally work best. You might also consider having a cocktail mixed up and ready as guests arrive--it's a good way to distract them while you finish cooking. Also be sure to have nonalcoholic choices on hand for those who don't partake.

8. Evaluate your kitchen. Now that you have a menu, think about how you will produce that menu in your kitchen and make adjustments as necessary. If you have one small oven and planned a menu of mostly roasted dishes, you might be in trouble, since those dishes will all need time in the oven, possibly at drastically different temperature. (Dishes that call for roasting at a similar temperature can be made together--it's not essential that something roast at exactly 325 F, for example. It would be fine to cook it at 300 F for a little longer or 350 F a little shorter. Just be sure to watch them so they don't burn and make sure they cook through.) If you don't have a lot of freezer space, making a lot in advance might not be an option either. I try to plan the side dishes so that some are done on the stove and others in the oven. Vegetables usually roast at a higher temperature than meat, so I suggest roasting the vegetable dishes first (you can reheat them later), then lower the oven temperature to do the turkey and the stuffing together. Ovens cool off faster than they heat up. If you have two ovens, you can set them for different temperatures and cook the higher-temperature dishes together in one and the lower-temperatures together in the other other. Make other sides like mashed potatoes and green beans on the stove.

9. Create a schedule for your day(s). Make a list of all the things you're going to make. Then put them in a logical order, working around the turkey*, since it is the dish that will probably take the longest. Turkeys should rest a bit before serving, but you don't want them to get cold. During that resting period is when you'll probably be making the gravy (since it usually include the pan drippings), which doesn't take long. By the time the turkey is done, everything else should be done too. Allocate dishes that can be made in advance to the day before or the morning. My rough outline of cooking a meal that I serve at 5 p.m. on Thanksgiving goes something like this:
*Be sure to account for thawing the turkey if it has been frozen. For food safety, turkeys should be thawed in the refrigerator, not at room temperature. According to USDA, It takes 24 hours to thaw 4-5 pounds of turkey. So a 12-15 pound turkey will take at least 3 days to thaw (once thawed, the turkey is safe in the refrigerator for 1 to 2 days). If you're brining a turkey, it needs to be thawed before you put it in the brine, so that adds another day.

10. Shop smartly. Go through your list of planned dishes and write down the ingredients you'll need to make them (see this post for tips on planning your shopping list). Some things can be bought in advance, liked canned goods and nuts, but vegetables, fruit and meat, which are all perishable, should probably be bought no earlier than the weekend before. Consider hitting the stores early in the morning to avoid crowds. If your neighborhood has a farmers market, that's also a great outlet for vegetables (I buy most of mine from New Morning Farm). And buying your vegetables at the market will mean a quicker trip to the busy grocery store.

Thanksgiving Central (links to all recipes and stories)

7 Thanksgiving Shopping Tips
Posted by Cook In / Dine Out at 12:00 AM

Email ThisBlogThis!Share to TwitterShare to FacebookShare to Pinterest
Labels: Thanksgiving