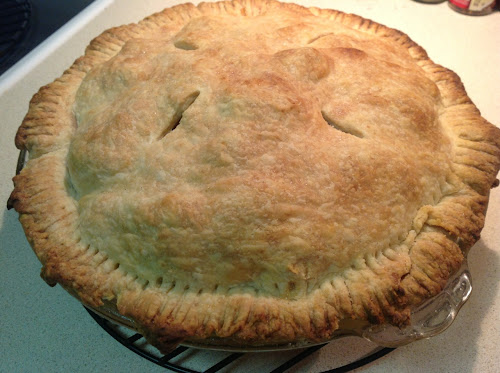 Vodka crust?! Have you lost your mind?!

That's surely what some of you are thinking. But stay with me here. This comes approved from the good folks at America's Test Kitchen, the premiere destination for home cooks with a desire for scientifically perfected recipes.

This was one of the dishes Christopher Kimball spoke about at a recent event unveiling the test kitchen's new cookbook: The Science of Good Cooking. I'd seen their vodka pie crust recipe before, but hadn't thought about trying it.

Kimball's explanation for why it works convinced me. Water, when mixed with flour, promotes the formation of gluten, the protein that makes bread products chewy. While that might be nice in a pizza crust or a baguette, chewy isn't really what we're looking for with pie crust. We want something flaky. That's where the vodka comes in: replacing some of the water with vodka, which is generally 40 percent alcohol, inhibits gluten formation. And, as the crust bakes, it also evaporates faster. The result is a flakier crust with no vodka aftertaste (really). If you don't take my word for it, read America's Test Kitchen's explanation here.

This crust recipe is pretty easy too. I've been making it sans vodka for years. It comes together in the food processor, so there's no need for a pastry blender. The only major deviation I make to ATK's recipe, is that I make mine with all butter, rather than a butter/shortening mix. I find I like the flavor better and the butter crust handles just fine for me.

(Note: I like Granny Smith and Honeycrisp, since they are firm apples that give a nice tart/sweet combination of flavors. They are also widely available at supermarkets. Feel free to use other apples. America's Test Kitchen's recipe calls for a mix of Granny Smith and McIntosh, but also encourages the use of other seasonal apples, such as Macoun, Royal Gala, Empire or Cortland. Also, the original recipe calls for brushing the pie crust with egg white. This gives it a nice sheen, but I skip this step, preferring to see the nice flaky browned crust.)

3. Preheat oven to 425 F with oven rack in center position. Remove dough from refrigerator and allow to warm slightly if still and very cold. On a floured surface, roll out the first disc to a circle with an even thickness and 12-inch diameter. Gently fold dough into quarters, lay in 9-inch pie plate and unfold so that dough has an even overhang around the rim of the pie plate. Refrigerate while preparing the apples.

4. Peel, core and chop the apples into 1/4- to 1/2-inch slices. Put in a large bowl and toss with the sugar, lemon juice, lemon zest and spices. Transfer the mixture to the dough-lined pie plate, mounding the fruit mixture in the middle. Roll out the other dough disc to a circle with an even thickness and 12-inch diameter. Place the second dough round over the pie. Trim the top and bottom edges to 1/2-inch beyond the pie plate lip. Fold the 1/2-inch overhang underneath itself so the folded edge is flush with the plate lip. Use a fork to flute the edge and seal the top dough to the bottom. Cut a few slits on the dough top. Sprinkle top of pie with cinnamon-sugar.

5. Bake until pie is golden, about 25 minutes. Reduce oven temperature to 375 F and bake another 30-35 minutes until the pie is bubbly and golden brown (from my experience, the pie may need up to 10 minutes of additional baking time). Place on a wire rack to cool.