Cornbread Stuffing with Sausage and Fennel 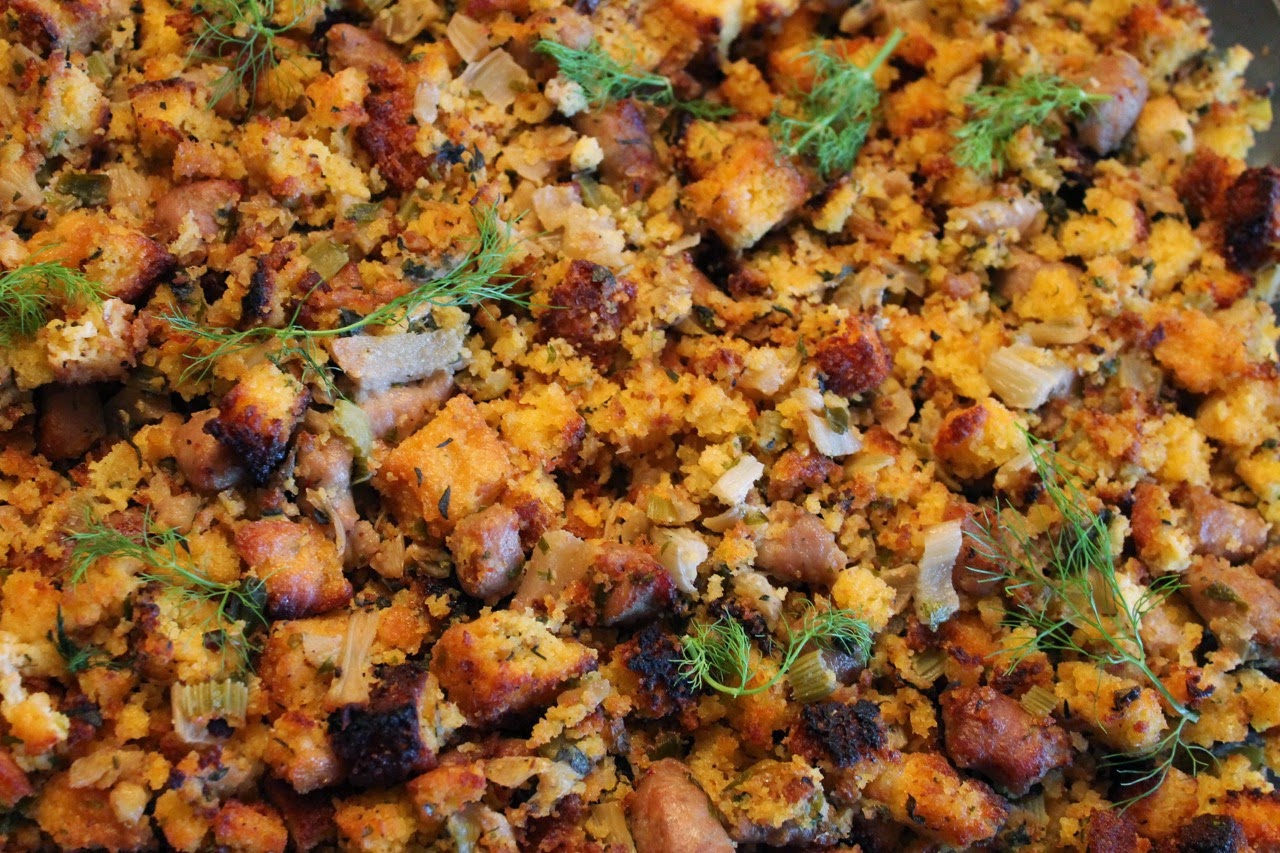 A common question this time of year: What's the difference between "stuffing" and "dressing"?

The simple answer is that "stuffing" is literally stuffed inside the turkey. The same dish prepared in its own roasting pan is considered "dressing."

The more complicated answer is that it depends on the preference of the speaker. 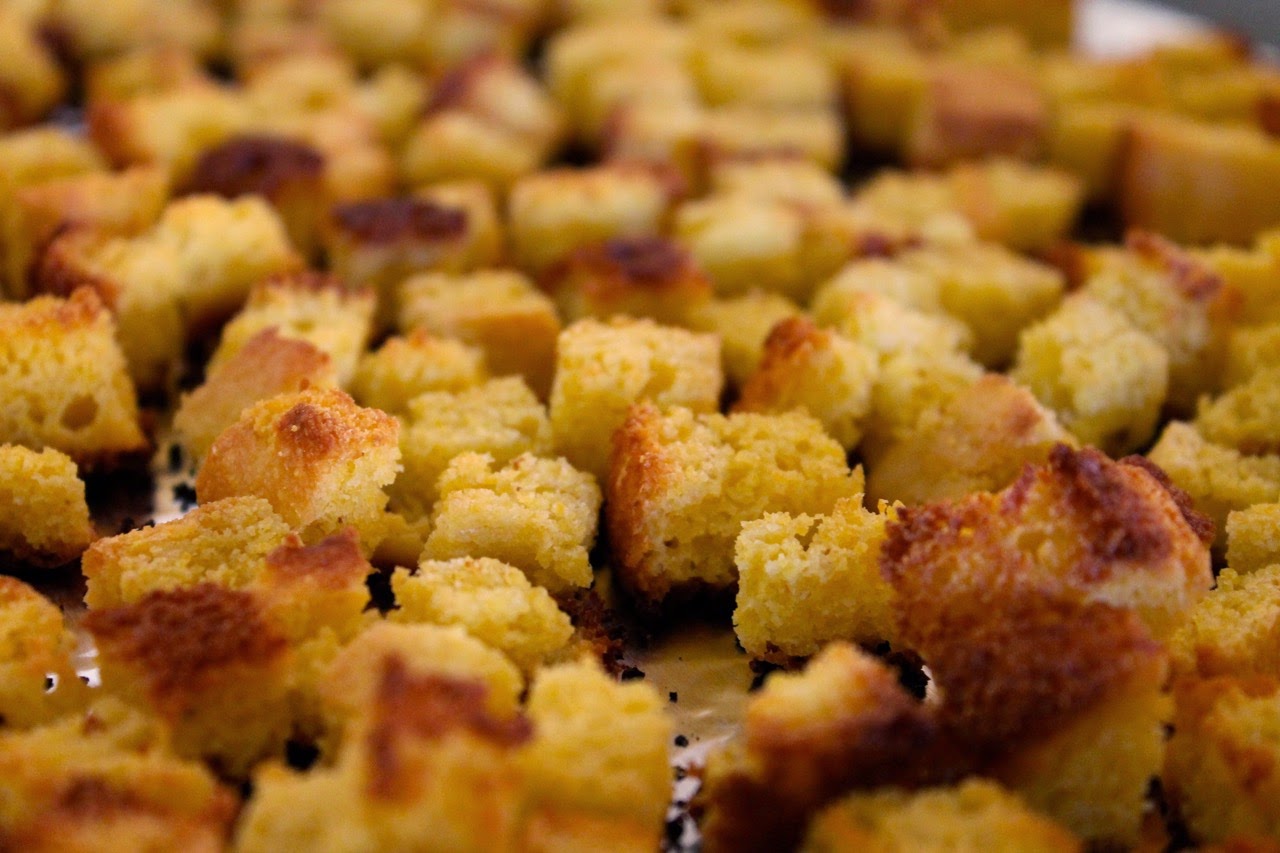 Earlier this year, I wrote a series of articles on language and food, including a review of the book The Language of Food by Dan Jurafsky. I've also have the pleasure of working with a linguistics student for the past few months. So I've thought more than usual lately about language. And that includes the so-called "rules" of language that we are supposed to adhere to but often break--generally because other people break them. Once the rule-breaking reaches a tipping point, the rule is pretty much worthless. 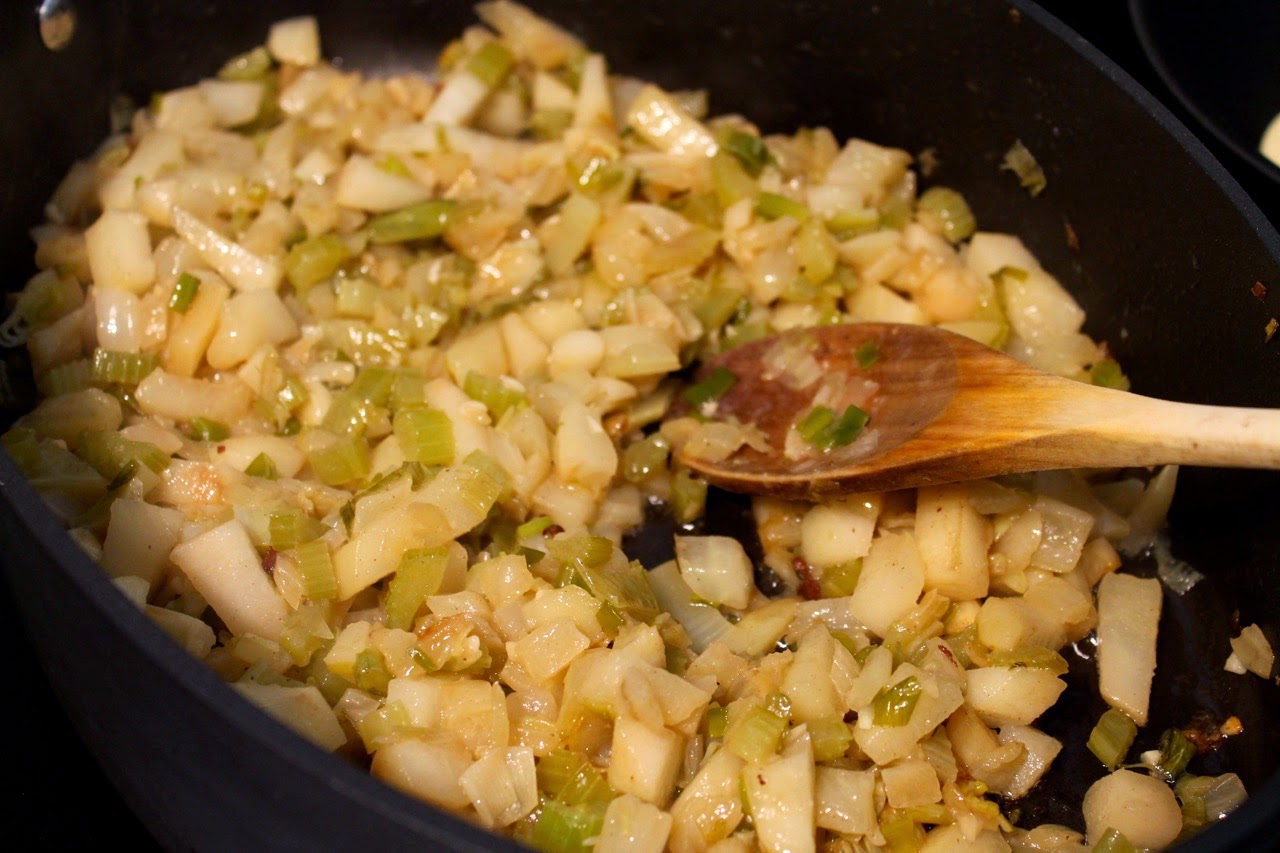 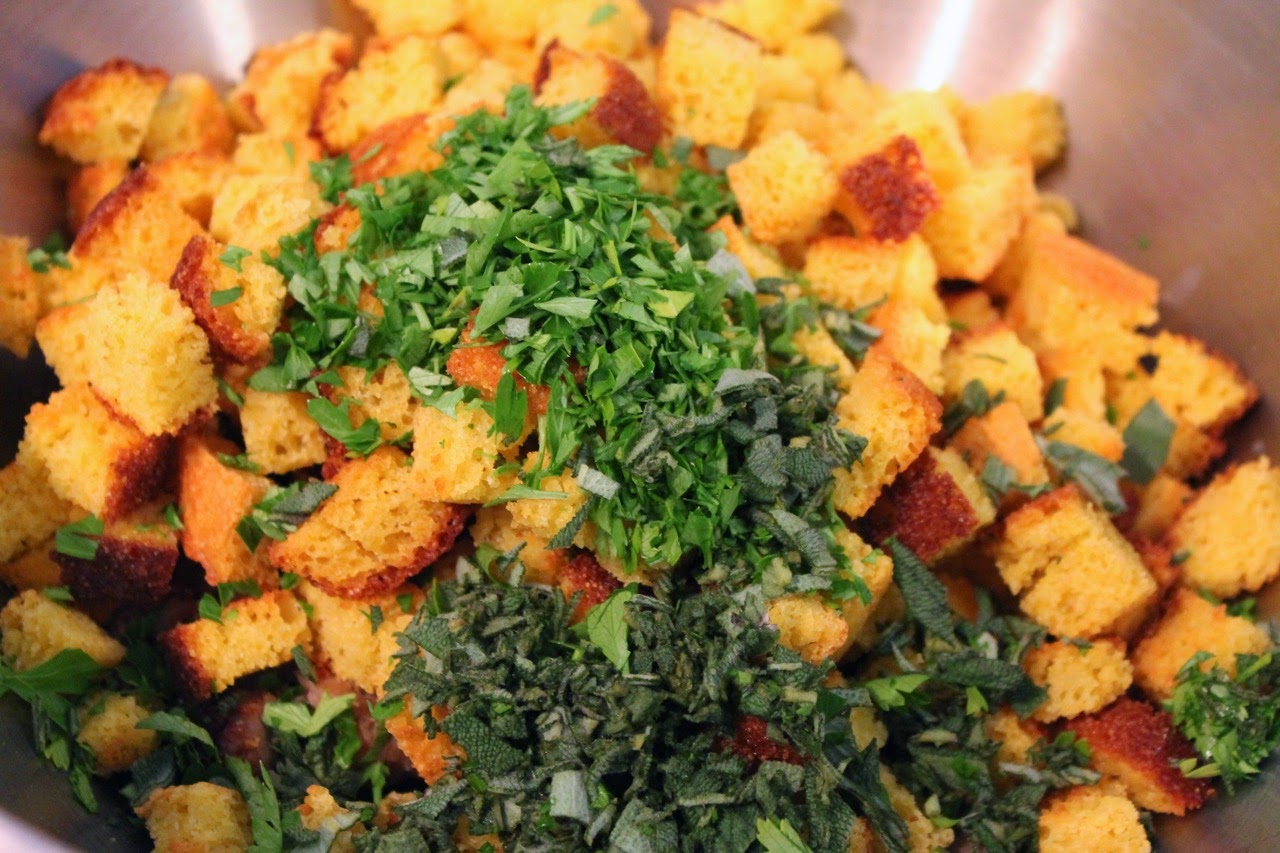 And that seems to be the case with "stuffing." Those adhering to a strict definition of the word will say you shouldn't use it for a bread-and-vegetable mixture that was baked outside of the bird. Others, including me, like the term for this dish no matter what. To me, "dressing" evokes salad dressing, which this definitely is not. It could be the influence of the Kraft Stove Top people, who market a "stuffing" food product that is easily enjoyed without preparing it inside a bird. Furthermore, I've read that in the South, they call either version "dressing." So the distinction just isn't that meaningful.

Thus, hence fore, if you prefer to call a savory baked Thanksgiving mixture of vegetables, bread, herbs, broth and other flavorings "stuffing," then you're a-okay in my book. 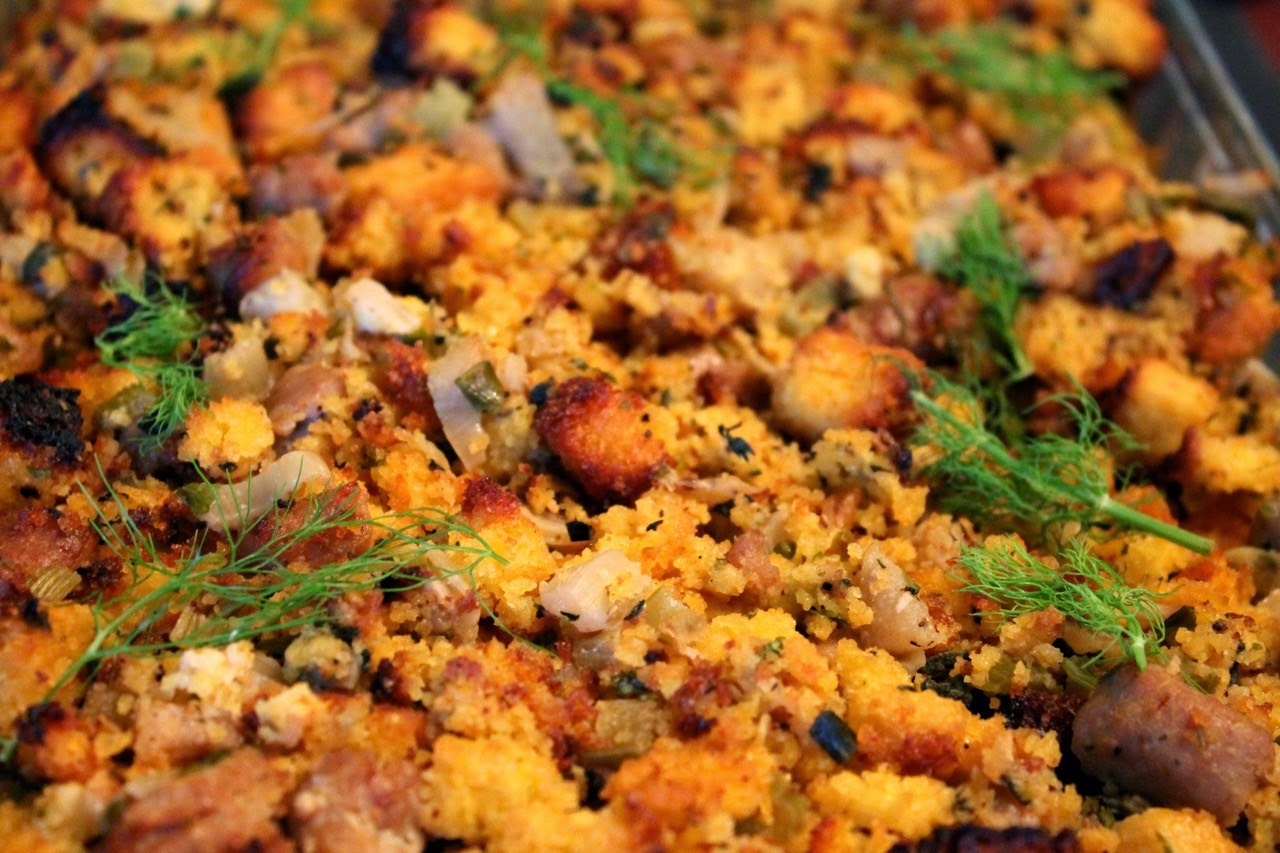 1. Preheat oven to 300 F. Dive cornbread cubes between two rimmed baking sheets. Baking for 40 to 45 minutes, tossing occasionally until the bread cubes dry out and begin to brown in spots. Set aside.

2. Heat a large skillet over medium-high heat. Cook the sausage until well browned, breaking up with a spoon as it cooks. Using a slotted spoon, transfer the sausage to a plate.

3. Reduce heat under the skillet to medium and add 8 tbsp. of the butter (that's a whole stick, FYI). Add the fennel, celery, scallions and garlic. Cook, stirring frequently, until the vegetables are tender, about 15 minutes. Add the pears and red wine, then increase the heat to medium-high and cook, stirring occasionally, for 5 minutes.

4. Heat the oven to 400 F. Grease a 9 X 13 baking dish with butter. In a large bowl, combine the cooked sausage, sautéed vegetable mixture, fresh herbs, 1 1/2 cups of broth and salt and pepper to taste. Add the cornbread cubes and toss to combine. Let sit for 10 minutes to soak up the broth, then add the remaining 1/2 cup of broth and beaten eggs and toss to combine. Transfer the mixture to the prepared baking dish and dot with the remaining 2 tbsp. of butter. Cover with aluminum foil and bake until heated through, about 30 minutes. Remove foil and bake another 20 to 30 minutes until the top of the stuffing is lightly browned. Scatter the reserved fennel fronds on top and serve. 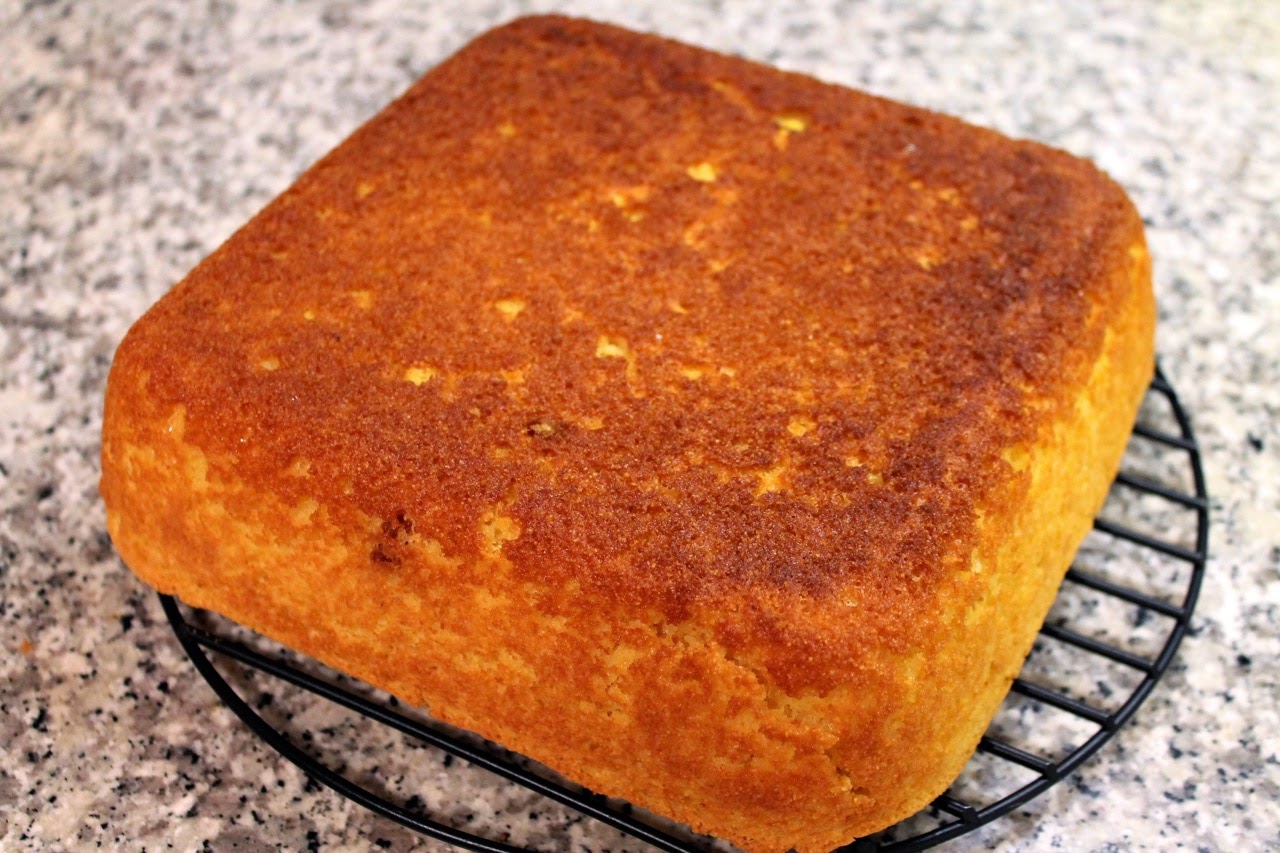 2. In a large bowl, combine flour, cornmeal, sugar, baking powder, salt and baking soda and whisk to combine. In a medium bowl, combine the eggs, buttermilk and milk and whisk together, then whisk the egg mixture into the dry ingredients until just combined (the batter will be a bit lumpy). Stir in the 3 tbsp. of melted butter. Pour the batter into the baking dish. Bake until a knife inserted into the center comes out clean, about 25 to 30 minutes. Allow to cool slightly, then run a knife around the edges of the cornbread and remove from the pan; transfer to a cooling rack and allow to cool completely.