Book: The Language of Food 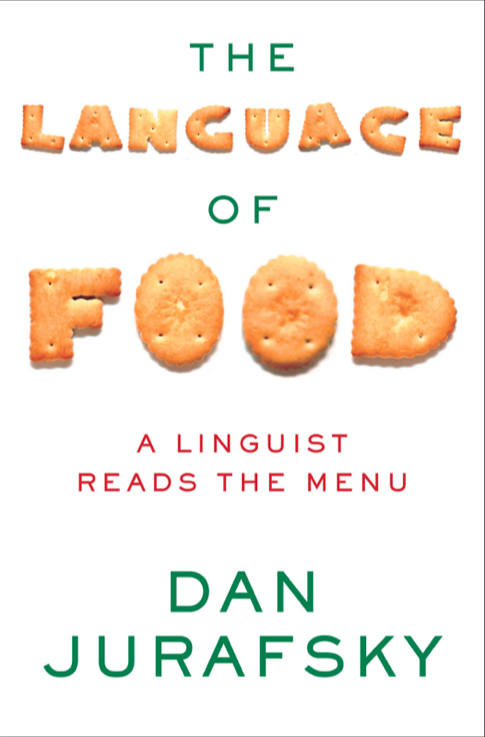 Have you ever wondered why "entree," a word that sounds like "enter," means a main course rather than a first?

Or why India Pale Ale is so-named, given that it is neither produced in India nor contains ingredients from India (as far as I know)?

These are but a few of the questions answered in The Language of Food, the new book by Stanford University linguistics professor Dan Jurafsky.

Books about language are often a great read. Lynn Truss's Eats, Shoots & Leaves is an engaging and witty treatise on the importance of punctuation. And Bill Bryson's The Mother Tongue, about the history of the English language, is a must-read for those who marvel at the complex and often confounding ways that we speak and write. Fans of those books who also love to eat will enjoy Jurafsky's work, which seeks to explain the history and evolution of some of the common terms we use for food, providing insights into their relationship with Western and other cultures.

Each of the book's chapters focus on a different subject or set of related subjects, which include examining specific food terms like "toast," "macaroni" and "ketchup." Fans of Jurafsky's blog will recognize some of the chapters as expanded versions of articles he's previously posted online. Although each chapter is rooted in language, but this is sometimes to lens to examine other questions of history and the evolution of food culture. The chapter on "why the Chinese don't have dessert," for example, moves far afield from language to examine the origin of the notion that meals should end with something sweet in Western but not Eastern culture (and how the fortune cookie, an American invention, is a nice bridge between the two).

One of my favorite chapters comes early in the book where Jurafsky and colleagues examined a dataset of 6,500 restaurant menus to learn what the language of menus reveals about the food restaurants serve. Some of his observations may seem counterintuitive on their face, but reveal a lot about what we expect at restaurants of different price points.

For example, lower-price restaurants' menus tend to use more "filler" words, i.e. empty words that don't really mean anything like "flavorful" and "delicious." Certainly, no one is hoping to choose a dish that isn't those things. In contrast, higher-price restaurants tend to not use as many adjectives (there's no need to point out the bacon is "real," since, at such establishments, it is expected) or if they do, they use longer words ("decaffeinated" and not "decaf") or terms that point to the food's provenance. His conclusion on this subject makes a lot of sense: "we suspect that empty words are linked with lower prices because they are in fact fillers; stuff you put in the description of the dish when you don't have something really valuable like crab or porterhouse to talk about instead."

You can see this for yourself. Compare, for example the description of a burger from Red Robin, a national chain, to that of Bourbon Steak, a high-end D.C. steakhouse:

Red Robin's adjectives tell us about the burger pattie's size ("classic-sized"), whereas Bourbon Steak tells us about how it is cooked ("oak-fired"). Bourbon steak tells us its cheese is "Cabot clothbound," an expensive type of cheddar, while Red Robin just tells us the cheese is "melted," since what other descriptive adjectives would you say about American cheese? Notice the difference in how the price is expressed: Red Robin uses a dollar sign and includes 99 cents, that old trick to make you think the burger is $6 when it's really $7. Bourbon steak does neither, a newer trick restaurants are employing to disassociate your menu selection from the impact on your wallet. Lastly, notice they both use the term "secret sauce," a tradition born in fast-food burger restaurants.

A key theme in the book is the idea of how words and word use change. Certainly, our food is an ever-changing thing, subject to the increasing availability of foods from other places, diet fads (gluten free, paleo), trends (kale, quinoa, bacon) and our understanding of nutrition (bye-bye margarine). Similarly, the language we use to discuss what we eat evolves as well, although not everyone likes that it does.

Writes Jurafsky: "We are carefully taught to clamp down on changes in language as if new ways of speaking are unnatural, adopted by ignorant speakers out of stupidity or even malice. Yet linguistic research demonstrates that the gradual changes in language over time often lead to significant improvements in the language's clarity or efficiency..." He's talking specifically about the aforementioned evolution of the term "entree" from meaning an early course to a main course, but this statement applies broadly to language about food and really language in general.

That brings me to this week's theme on my blog. This week I'll be sharing recipes that have a connection to language, specifically how food terms can evolve to mean different things. I've got three delicious examples that I hope will stir debate and whet your appetites.
Posted by Cook In / Dine Out at 12:00 AM