In U.S. Mexican restaurants, I usually see modern-day mole sauces served with chicken. However, according to Dan Jurafsky's The Language of Food, there is a long history of serving mole with turkey going back to the ancient times of the Aztecs.

Jurafsky's book got me thinking that mole might make a good foundation for a Thanksgiving turkey brine. I'd had such great results brining a turkey breast in 2012 and using a spicy brine for chicken last year, that I thought it might not only work but make for an incredibly flavorful turkey. 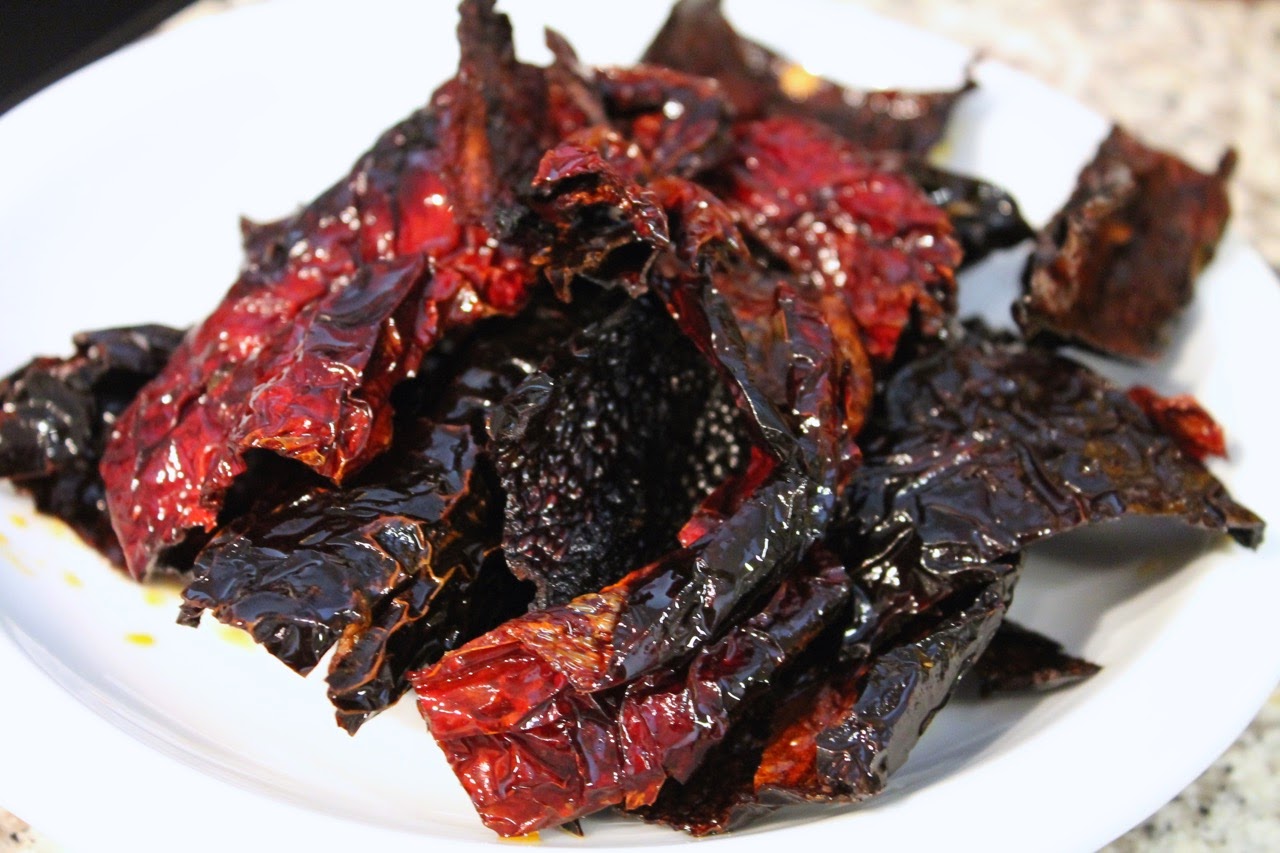 Moles can be daunting because they include a long list of ingredients. To assuage your fears, I offer a couple observations. First, most of the ingredients are spices, nuts or seeds that require measuring but little prep. So apart from the chiles, onion and garlic, there's not the kind of chopping and mincing that often make a long ingredient list taxing. Second, because there are so many ingredients, the recipe is flexible. Don't having something? Don't sweat it. Omit or substitute; just be wary of categorically excluding a key flavor--like not including any nuts or seeds, for example.

I adapted the mole sauce brine from Pati Jinich's recipe for Mole Poblano. I used most, but not all of the spices in her mole. In particular, I cut way back on the chiles, for fear it could make my turkey too spicy. Turns out that wasn't the case, as the turkey wasn't at all hot. So if you like spicy, feel free to use more chiles (Pati's recipe called for 3 oz. anchos, 3 oz. pasillas, 3 oz. mulatos and 1/3 oz. chipotles--which I pared way back to just 2 oz. of anchos). Since I didn't need a "sauce" so much as a "paste," I used tomato paste rather than the tomatoes and tomatillos she used. The ingredients make more mole than you need for the brine. I ended up with about 3 to 4 cups, but used 2 cups for the brine (with the rest, I made Mole Gravy, today's other recipe). 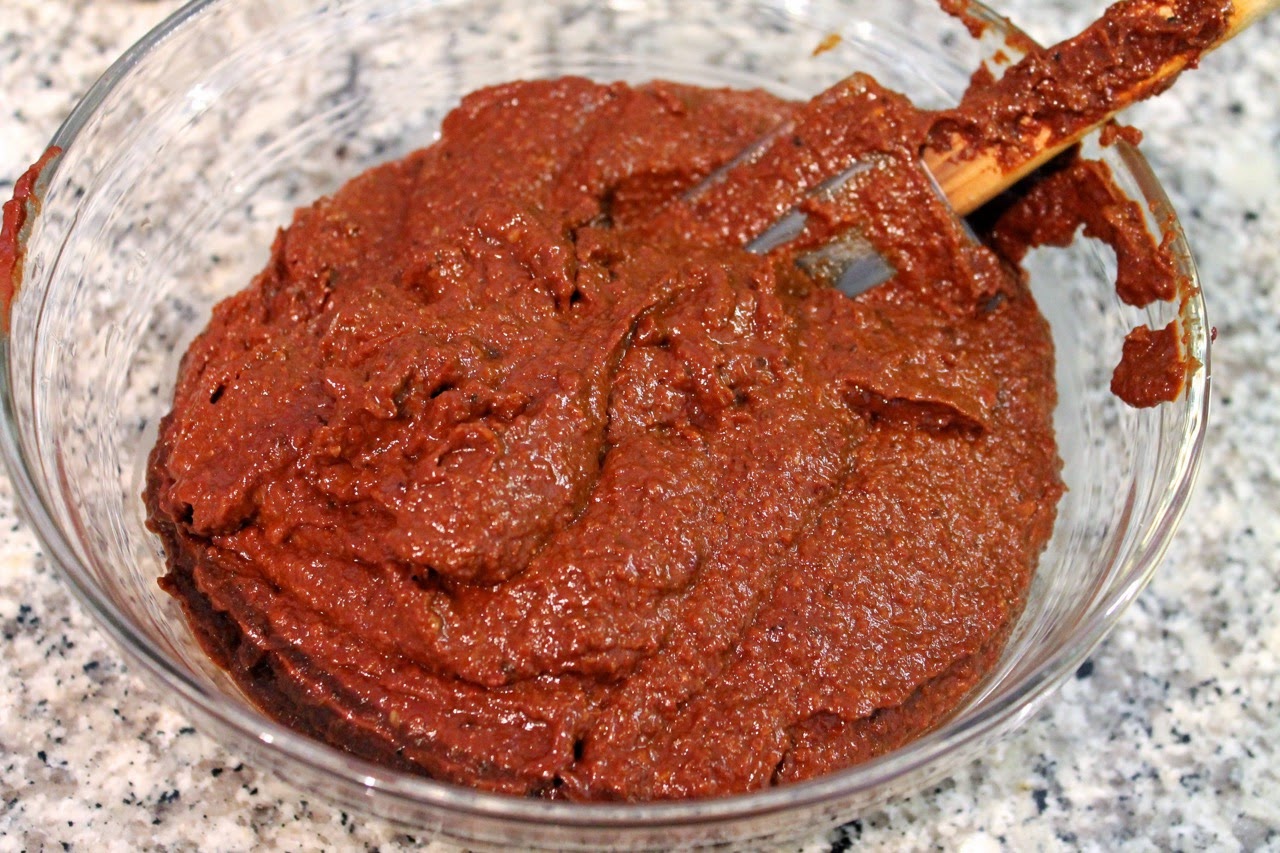 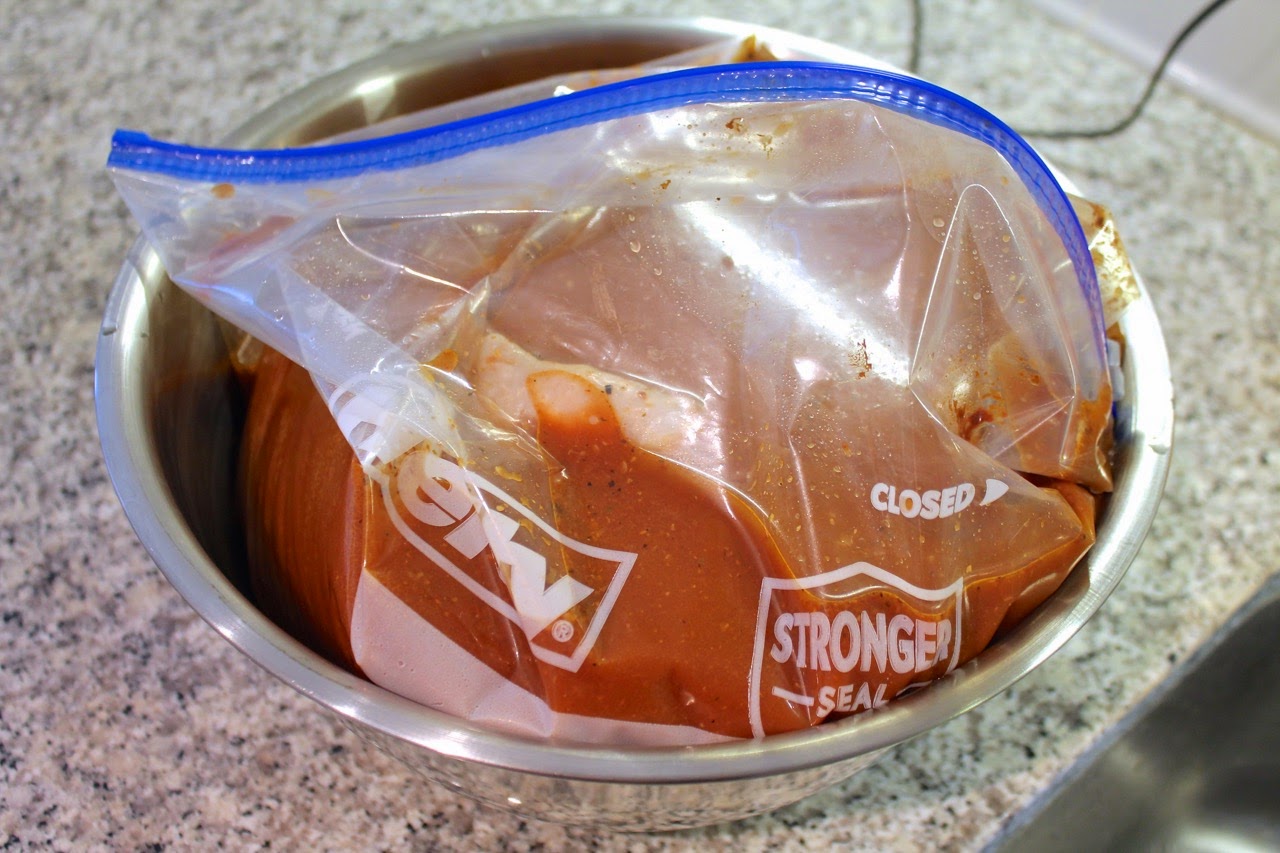 Because this is a brine recipe, remember to allot enough time for making this. The turkey needs to brine overnight, so you should plan to make the mole and prepare the brine the day before you roast the turkey. I use a jumbo 2 1/2 gallon sealable plastic bag for the brining with the whole thing set in a large metal bowl (just in case; it would be awful to have raw turkey brine spilled all over the fridge). 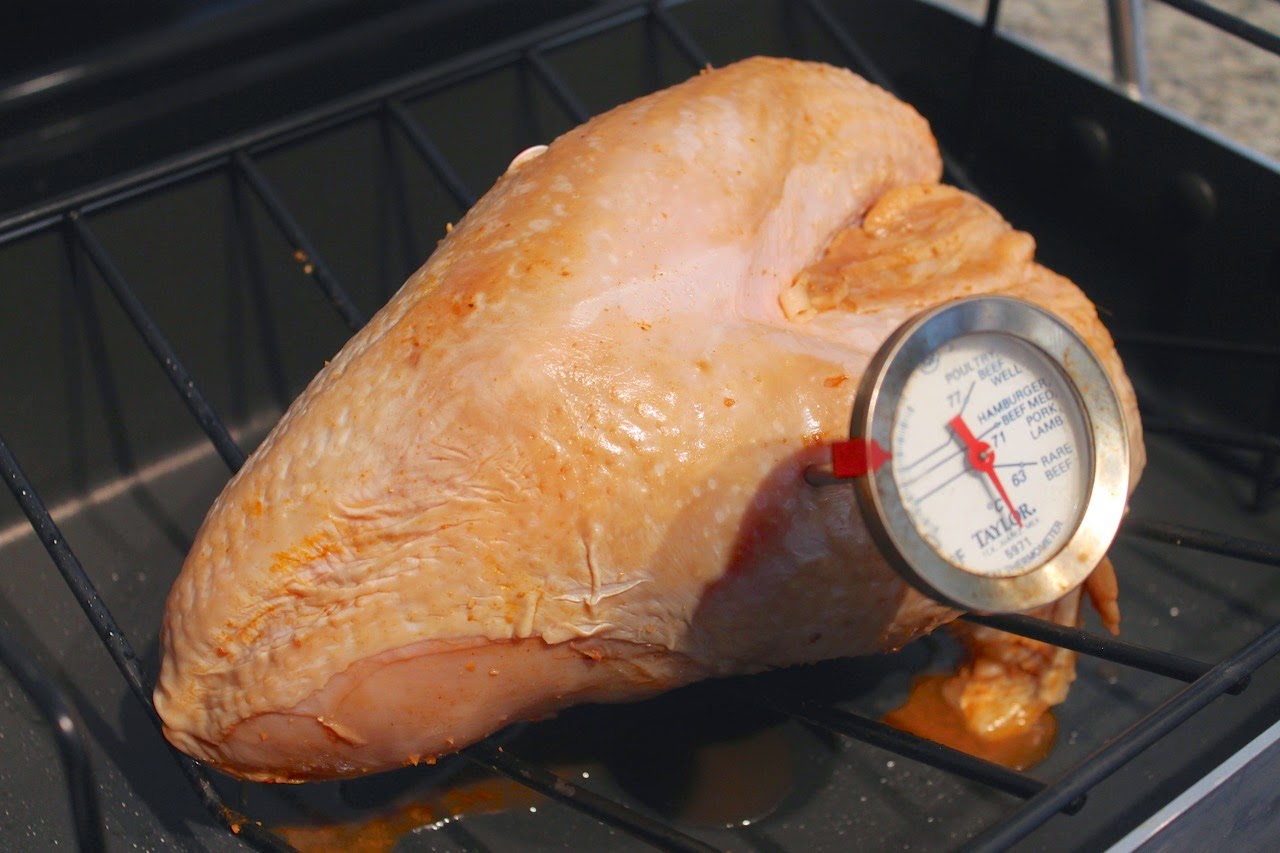 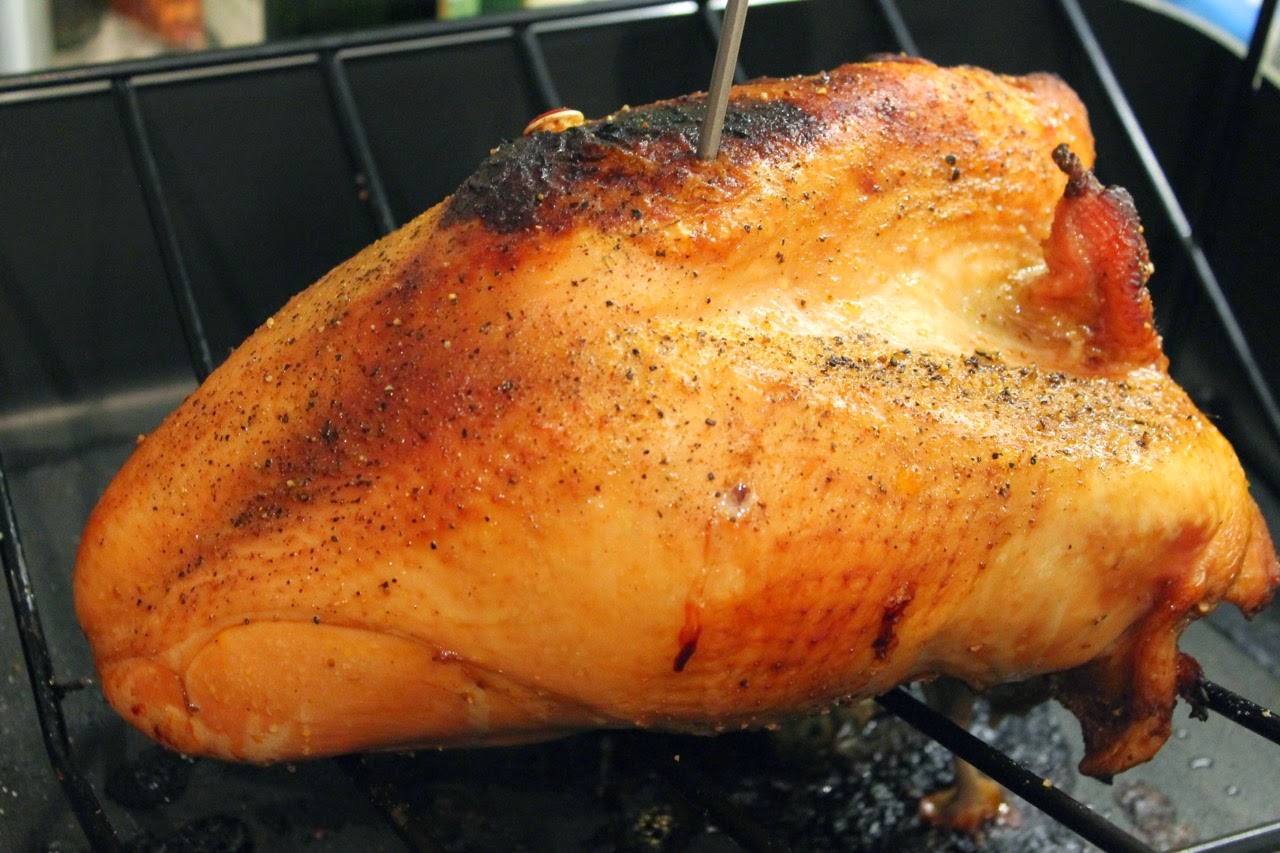 Brines give turkey subtle flavors, so don't expect a super spicy turkey from this. What you get is the wonderful subtle flavors of the various mole spices. The turkey is moist and perfectly seasoned.


1. Heat oil in a large skillet over medium-high. Add the chile peppers and sauté, stirring frequently, for about 5 minutes. Remove the chiles from the oil. Add the onion and garlic and sauté until softened, about 5 minutes. Add the almonds, peanuts, raisins and pumpkin seeds and cook another 2-3 minutes, then add the sesame seeds, spices and herbs (cloves, coriander, cinnamon, allspice, thyme and marjoram), and cook another 3-4 minutes. Stir in the tomato paste and bittersweet chocolate, then add the chiles and water and stir until the ingredients are well combined. Reduce heat to medium-low and simmer for 12 to 15 minutes. Allow to cool, then puree the mixture in batches using a blender or immersion blender. Transfer to a container and store in the fridge until ready to use. Makes about 3 to 4 cups.

2. Add 2 cups of the mole sauce to a large (2 gallon) sealable plastic bag (reserve the rest of the mole for another use, such as mole gravy). Combine the kosher salt and warm water and stir until the salt has dissolved. Add the warm water and salt mixture to the bag and stir to combine with the mole. Add the remaining water and stir to combine. Place the turkey breast in the bag with the mole brine, then place the bag in a large bowl. Put in the refrigerator to bring overnight (about 20 to 24 hours).

3. Preheat oven to 450 F. Remove turkey from brine (discard brine), place on a V-rack set in a roasting pan. Pat dry, then brush or spray with olive oil and season with salt and pepper. Roast for 30 to 35 minutes. Loosely cover the turkey breast with aluminum foil, reduce heat to 300 F and continue roasting another 2 to 2 1/2 hours or more (depending on the turkey's size) until an instant-read thermometer reads 165 F. Let turkey rest for 10 to 15 minutes, then transfer to a cutting board. Cut the two breast halves from the bones, then slice into 1-inch pieces. Serve on a platter.