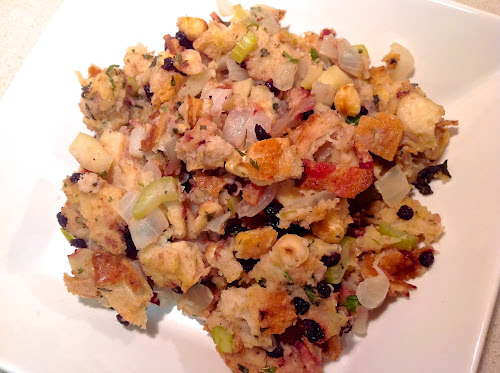 Stuffing, technically dressing if you bake it outside the bird, is Thanksgiving’s most versatile dish. At its core, stuffing is mostly bread with vegetables, liquid, herbs and seasoning. Welcome additions may include dried or fresh fruit, mushrooms, meat and nuts. The possible variations are seemingly endless. This website can help you come up with your own recipe.

A good way to create an original stuffing recipe is to select flavors around a theme. In this variation, I pay homage to my home state of Oregon, incorporating a mix of ingredients the state is known for.

For the bread, I went with sourdough, which, for whatever reason, always tastes better when I buy it on the West Coast (San Francisco is particularly known for it, but Portland bakeries make it well too).

No self-respecting Oregonian uses the highfalutin term “hazelnuts” to refer to filberts, which I used to collect from my grandmother’s filbert orchard as a kid.

When I think of Oregon berries, blueberries immediately come to mind, which my mother buys by the flat from a small farm along the highway to the coast. Since fresh blueberries are not in season this time of year, I used the dried variety.

Apples, of course, grow all over, but the northwest is the largest growing region in the country (60 percent of apples grown in the U.S. come from Washington state). They are also common in Oregon; as a child, my backyard had several varieties of apple trees. Since apples are perfect for Thanksgiving, I added one to this dish, cooked along with the onion and celery.

I’ll admit, there’s nothing particularly “Oregon” about bacon, but I added it anyway because it’s really good. I suppose I could argue that I first ate bacon in Oregon, so that’s why it’s included (but that would be true of just about anything).

For liquid, I knew I had to include some Oregon craft brewery beer. Although I love the state's hoppy IPAs, I was concerned they might overpower the dish, so I opted for Widmer’s Drifter Pale Ale, which has some hop flavor, but is less assertive.

This stuffing smelled so good when it came out of the oven, with the savory aromas of the beer and sage being most prominent. The blueberries added a light sweet note and the bacon gave it a nice smoky richness. If you're looking for a reason to eat stuffing year-round, this recipe makes a good argument for it.

1. Preheat oven to 300 F. Spread the bread cubes evenly on a baking sheet. Bake in the oven for about 12 minutes. Remove from oven and set on the counter to cool and continuing drying out. Increase oven temperature to 350 F.

2. Heat a medium frying pan over medium-low heat. Toast the filberts until they are fragrant and starting to brown. Remove nuts from pan, pour onto a kitchen towel, fold towel over nuts and rub to remove skins. (note: because the skins won’t come off of all the nuts, I usually toast about twice as much as I need and save the nuts with the skins for another use, such as snacking.)

3. Heat a large frying pan over medium heat. Cook the bacon until browned and crisp. Remove from pan and chop into bits. Remove residual bacon fat from pan. Melt butter in the pan. Add onion, celery and apple, and sauté until softened, about 10 minutes. Set aside.

4. In a large bowl, combine dried bread cubes, filberts, onions, celery, apples, herbs, blueberries, seasoned salt and pepper. Pour beaten eggs, beer and chicken broth over mixture. Stir to evenly coat all ingredients. Transfer to a lightly oiled 9 X 13 baking dish. Bake for about 40-45 minutes, stirring every 15 minutes until the mixture is cooked through (internal temperature of 165 F) and lightly browned on top.
Posted by Cook In / Dine Out at 7:27 AM