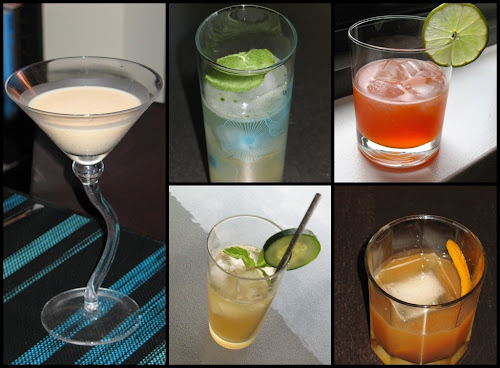 I had a lot of fun coming up with new cocktails this year. The Dallas Drinks series I did with Chris for Dallas Decoder was a particular highlight. Television in general proved to be a fertile source of inspiration. The Whore’s Bath, inspired by an episode of ABC’s sitcom Happy Endings, is far and away the most popular thing I’ve done for Cook In / Dine Out. Here is a look back at the year’s best cocktails, by base spirit.

Best: Kickin’ Cucumber Collins. This drink is potent, not so much with booze, but with flavor, courtesy of the spicy ginger-peppercorn syrup and herbal notes of Charrtreuse. Its peppery kick is nicely offset by the lemon juice and muddled cucumber, which make this drink refreshing too. The drink doubled as The Christopher for the Dallas Drinks series.

Honorable Mention: The Happy Endings Whore’s Bath. This drink won the popularity contest, with about 60 times the usual views for a typical post. Benedictine gives the drink its herbal sweetness, while grapefruit juice makes it tart but refreshing. This drink also did double-duty: It was also The Rebecca for Dallas Drinks.

Best: Light My Fire. This mezcal drink evoked “fire” from its bright red-orange hue, courtesy of Aperol, the popular Italian aperitif, and the jalapeño syrup. Served on the rocks with some lime juice, this was a nice late summer cocktail to enjoy on the balcony as the evening became much shorter.

Honorable Mention: Ruby Rosemary. I like this tequila cocktail because it harmonizes a mix of flavors: tart grapefruit, orange-vanilla Licor 43, spicy peppercorn and woodsy rosemary.

Best: Brazilian Ginger Mojito. The Cuban mojito and Brazilian caipirinha are similar drinks made with rum (specifically Brazilian cachaça for the caipirinha). This refreshing drinks subs cachaça for mojito’s typical rum, trades lemon for lime and adds a splash of ginger liqueur, creating a subtle twist on a classic favorite.

Honorable Mention: Apple Pie a la Glass. Apple pie and ice cream is a quintessentially American dessert. This drink seeks to distill the dessert’s flavors of apple, cinnamon, vanilla, ginger and lemon into a drink. Perfect for the holidays.

Best: Honey-Nut Old-Fashioned. Infusions are all the rage as a method of introducing unusual flavors into cocktails. This was probably the strangest infusion I attempted this year: infusing rye whiskey with peanuts. But it worked great. Mixed with honey syrup and some bitters, it was a curiously pleasing drink, one of the year’s most popular on my site.

Honorable Mention: Dallas Drinks: The J.R. Shot. We’re not big into shots in our house, but this bourbon/Kahlua/mint concoction, named in honor of one of television’s most beloved and reviled characters (sadly departed with the death of Larry Hagman) goes down as smooth of one of J.R.’s oil deals.

Best: Crème Brûlée Cocktail. A web search will show that lots of people have made cocktails inspired by Crème Brûlée, but I think mine comes closest to matching the character of the classic burnt vanilla custard, featuring vanilla vodka, cream and burnt vanilla syrup. It’s my favorite dessert cocktail of 2012.

Honorable Mention: The Wise Elder. Sage and St. Germain elderflower liqueur flavor this refreshing fizz cocktail. If Chris and I concoct another Dallas Drinks series, you may see this drink again, for it was actually inspired by a character from the original series. Stay tuned.

Email ThisBlogThis!Share to TwitterShare to FacebookShare to Pinterest
Labels: Best of 2012, cocktail, recipe