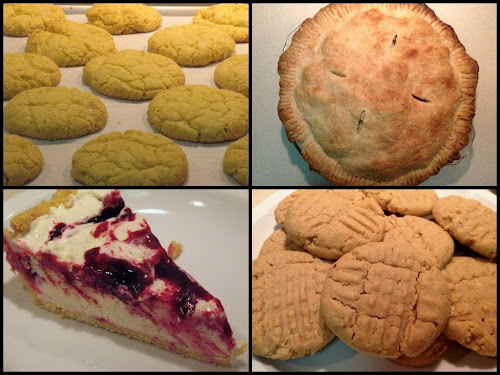 This year, my dessert-making was guided by two principal influences: the creativity of Momofuku Milk Bar pastry chef Christina Tosi and the ice cream wizardry of Jeni Britton Bauer. Whether I was faithfully re-creating their recipes or inspired by their techniques to whip up an original creation, the results always hit the sweet spot.

From Tosi, I found a cookie so delicious it rivals my all-time favorite (peanut butter), the Corn Cookie, which is like the sweetest corn bread transformed into a cookie. I also enjoyed making her Crack Pie just the other week.

After making a few of Bauer’s ice creams last year, I felt free to apply her technique to come up with flavors of my own. A favorite from early in the year to coincide with my week of olive oil themed content was, naturally, Olive Oil Ice Cream with a dark chocolate sauce.

Then I mashed up ideas from both of these chefs for two recipes: A Blackberry-Vanilla Ice Cream Pie with Corn Cookie Crust, which combined a Bauer ice cream recipe with Tosi’s idea to grind up corn cookies and use them as ice cream pie crust. Even more adventurous was the Cereal Milk Baked Alaska, which used Tosi’s idea of using sugary kids’ cereal as flavoring in ice cream but made with Bauer’s technique, encased in an oven-browned meringue over brown butter cake.

A couple of my desserts got special recognition this year, which was very nice to experience. In the summer, my Chocolate Cake with Peanut Butter Frosting won my office dessert contest. And in the run-up to Thanksgiving, the New York Times Diner’s Journal included a mention of my Apple Pie with Vodka Crust, based on a recipe from America’s Test Kitchen.

I went a little cookie crazy a few weeks ago. Besides the Corn Cookies, I featured my long-time favorite, Peanut Butter, and the holidays wouldn’t be complete without these Old-Fashioned Sugar Cookies from an old Mary Engelbreit recipe.
Posted by Cook In / Dine Out at 12:00 AM