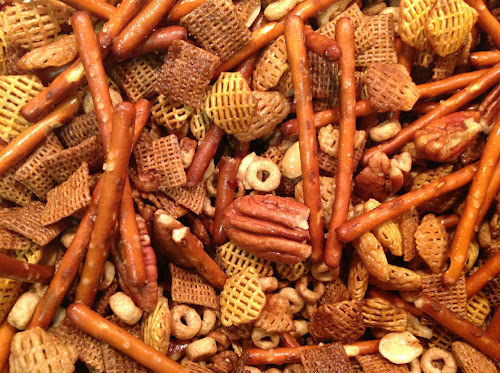 Party mix is a very different animal today than it was in the ‘80s. Back then, you couldn’t buy it. You had to make it at home using the recipe printed on most Chex brand cereals boxes.

And it didn’t have any breadsticks or bagel chips in it. That’s an innovation that came along in the last 15 years or so when Chex made an aggressive move to produce and market the mix as a snack. Back in the day, the mix had just four components: cereal, pretzels, nuts and salty buttery goodness.

That’s the way I think it should be, so this recipe hearkens back to the days before bagel chips and “bold party blend.” Chex apparently denies those days ever existed: the recipe for The Original Chex® Party Mix calls for a cup of bagel chips, which I assure you was not in the original Original Party Mix recipe (here’s photographic proof from Flickr, note how different Wheat Chex used to look).

Although it was never part of the official Chex mix recipe--rival brands assure this--a lot of people put Cheerios in their party mix. Their round shape and texture is a nice contrast with the Chex. After having party mix with Crispix in it, I also always include that. As for nuts, you can use mixed nuts or select your favorites. I always include peanuts, sometimes pecans too, depending on what’s on hand. Some recipes call for hot sauce, but I don’t put that in.

This is a great thing to have around the holidays for parties or when people stop by.

2013 update: I revised the recipe a bit to include weight measures.

Old-School Party Mix
Adapted from multiple recipes, including the Chex Party Mix recipe from way back

Preheat oven to 300 F. Combine pretzels, cereals and nuts in a large roasting pan. In a medium saucepan, heat butter, Worcestershire sauce, garlic powder and seasoned salt over medium heat until the butter melts. Stir to combine and then pour over the cereal mixture. Stir to evenly coat the dry ingredients with the butter mixture. Bake in the oven for 45 minutes, stirring every 15 minutes. Allow to cool and then store in an air-tight container.
Posted by Cook In / Dine Out at 7:00 AM