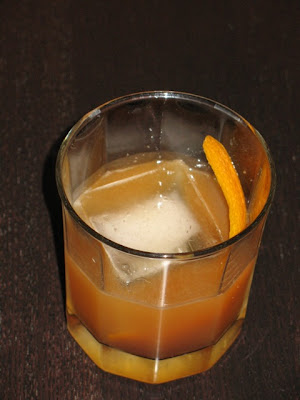 The New York Times ran a great piece this week about the Old-Fashioned cocktail in honor of the fifth season premiere of Mad Men. For those who watch the acclaimed AMC show, the Old-Fashioned is Don Draper's cocktail of choice, a classic mix of whiskey, bitters, sugar and water.

According to the Times' story, the drink was at its most popular during the late 1800s and early 1900s, referred to as a "whiskey cocktail" until the term "Old-Fashioned" was coined in 1886.

Into the 1900s, what had once been a simple drink began to be adulterated by the addition of muddled fruit. Chris and I tried the Old-Fashioned a couple years ago and didn't like it. The drink was too strong for us, and the muddled cherry and orange didn't add much.

But the Times' article inspired me to try again, with its reference to a new generation of Old-Fashioned cocktails that hearken back to its fruit-free roots while updating its profile with additional flavors. They mention Upper East Side bar JBird, which is serving a bevy of Old Fashioned cocktails, including a Honey-Nut Old-Fashioned, adapted from Marcus Tello's recipe from the Los Angeles bar The Varnish. I love Honey-Nut Cheerios, so I had to give this a try. 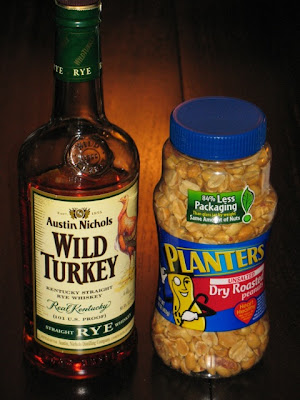 The first challenge was how to infuse the spirit and which spirit to use. The recipe I found calls for peanut-infused bourbon, but I decided to use rye whiskey instead. I found a website that discussed the process of doing this (which unfortunately I now can no longer find). The writer pointed out that the peanuts will absorb some of the whiskey, so I used 11 oz. of whiskey hoping that would yield 8 oz. of infused spirit (it was just under actually, so I recommend using 12 oz.). 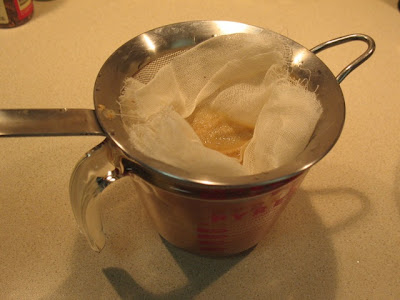 I combined just over half a cup of peanuts pulsed a few times in a food processor with the whiskey in a large glass measuring cup and let it set in the 'fridge for a day. Then I strained the mixture with a mesh strainer to remove the large pieces (I let it sit for awhile to strain as much of the liquid as possible). At this point, the mixture was still pretty cloudy and I was afraid it might taste a bit gritty, so I strained it twice more through three layers of cheesecloth. Although the resulting whiskey was still cloudy, this removed a good deal of peanut sediment, which turned out to work just fine. 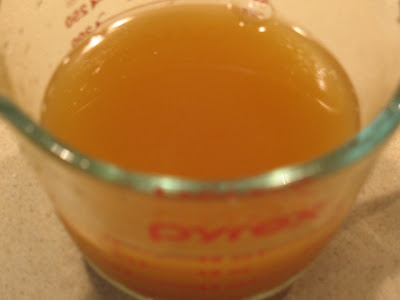 Although my reference recipe called for honey, since I wasn't shaking the drink, I decided instead to use honey syrup, which would mix better with the whiskey when stirred. To make it, I combined equal parts honey and water and nuked it for a minute in the microwave (yes, I know the microwave may "damage" the honey, but considering it's being mixed with a potent alcoholic spirit, I don't think it will matter much). 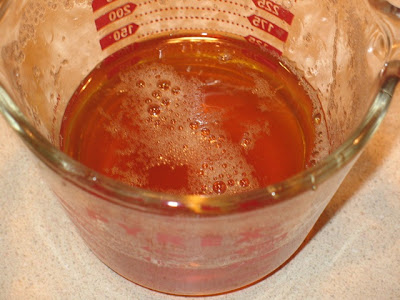 The resulting drink was pretty darn good. Strong for sure, but tasty. Both Chris and I liked it. You taste the honey and bourbon immediately with the peanut following through the aftertaste. Very nice.

Combine peanut-infused rye whiskey, honey syrup and angostura bitters in an Old-Fashioned glass with ice. Stir to combine and serve with an orange peel garnish.

Pulse peanuts in a food processor a few times to roughly chop them. Combine with rye whiskey in a container and let set in the refrigerator overnight. Strain the mixture with a mesh strainer to remove the peanut pieces and then slowly strain through cheesecloth to remove peanut sediment. This should yield about 8 oz. of infused whiskey, enough for four drinks.

Combine ingredients in a microwave safe glass measuring cup and microwave on high for 1 minute. Stir and refrigerate to cool. Alternatively, heat in a saucepan until combined and store in refrigerator to cool.