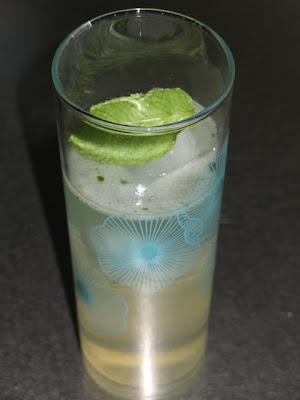 On a recent rather lovely Sunday afternoon, I discovered a batch of mint I wasn't planning on using that would otherwise go bad and decided the perfect way to prevent that was to make mojitos.

I could have made the traditional version with rum, lime, simple syrup and soda, but decided to switch it up a bit. Instead of rum, I used cachaca, a similar spirit from Brazil best known as the base of the caipirinha cocktail. Mostly because I have a big bag of them right now, I also swapped lemons for limes and some ginger liqueur for some of the syrup. The resulting drink was quite refreshing--perfect for sipping on your balcony during a sunny weekend afternoon.

1. Add mint leaves and simple syrup to shaker cup and muddle. Add ice, lemon juice, cachaca and ginger liqueur and shake until cold. Strain into collins glass and top with club soda. Stir to combine. Garnish with a mint sprig.
Posted by Cook In / Dine Out at 4:49 PM