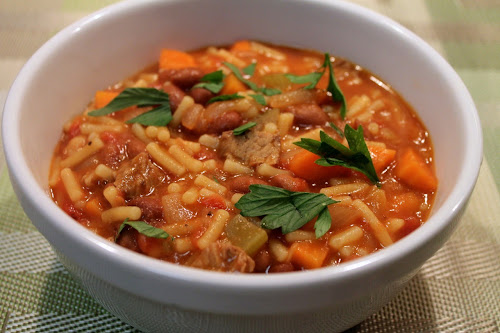 Still in my "use up" mode, I knocked out a few more things from my pantry with this wonderful Pasta e Fagioli (Pasta and Bean) Soup.

A lot of people probably know Pasta e Fagioli from the Olive Garden, where it is one of their most popular soups. Although I'm generally not much of an Olive Garden fan, I have had this soup and it is pretty satisfying.


For this version, I turned to the Italian cooking master Marcella Hazan, whose lasagna I so enjoyed earlier this year. She describes the cranberry bean (also known as the borlotti bean) as being the traditional bean for this soup, which she says has a flavor like chestnuts when fresh. It's clear she prefers fresh but says that dried work well too and that "if necessary, one may even use the canned." I may be turning a little red in admitting this, but the cans were what I used. If you can't find cranberry beans, kidney beans should work well here too.


The recipe below adjusts the proportions from Hazan's original recipe to make a greater volume of soup by upping the volume of vegetables substantially and doubling the amount of pasta. Be warned that I didn't double the liquid, so this makes a rather thick soup. In fact, given the puree from the tomatoes and the exuded starch from the pasta, it's downright stew-like (especially when eaten the next day as leftovers). That was perfectly fine with me, but if you want a "brothier" soup, I suggest adding more liquid--perhaps another couple cups of beef broth or water. 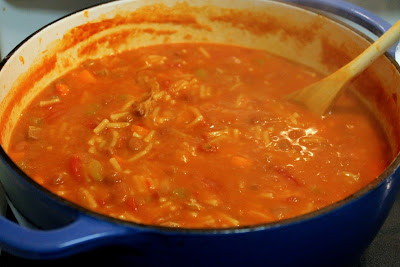 The noodles I used, brichetti, look like little stubs of thick spaghetti. Any kind of small stubby pasta would work well here, such as ditalini (short tubes) or conchigliette (little shells).

1. Heat olive oil over medium heat in an enamel Dutch oven or similar large soup pot. Add the onion, season to taste with salt and sauté until soft and golden, about 8 minutes.

2. Add the carrots and celery, stir to combine with the onion, then add the pork ribs. Cook for about 10 minutes, stirring occasionally.

3. Add the tomatoes and their juice and reduce heat to simmer, stirring frequently, for about 20 minutes.

4. Add the beans, stir to combine and cook for 5 minutes. Add the broth, cover the pot and bring to a gentle boil. Add the pasta and cook, at a gentle boil, until the pasta is almost al dente (let the residual heat finish cooking the pasta). Remove soup from the heat.

5. Remove the pork ribs and cut the meat from the bones (then discard the bones). Shred or chop the meat and return it to the pot. Season soup to taste with freshly ground black pepper. Stir in the parmesan cheese and butter. Serve in bowls topped with a sprinkle of fresh parsley.