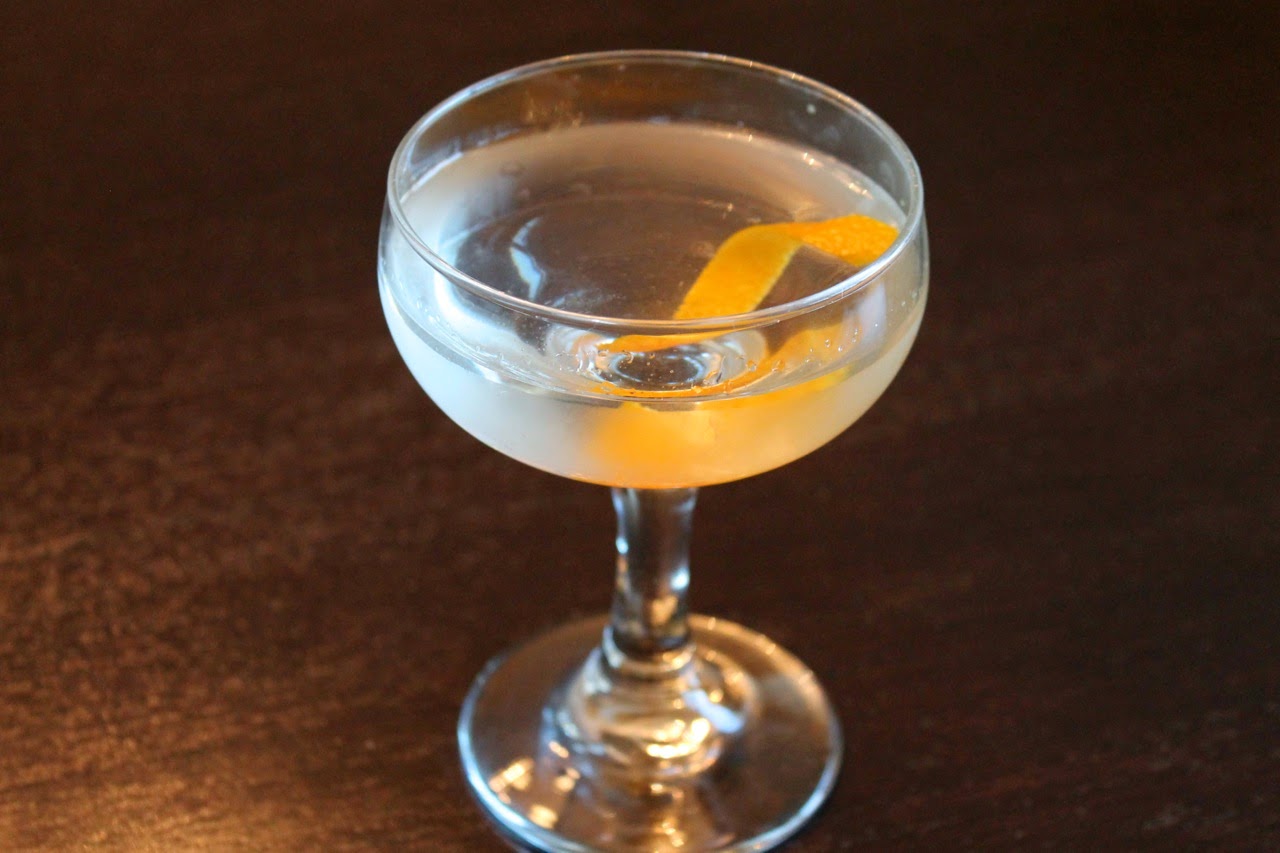 Monday, I wrote about classic bitters cocktails; Tuesday, I discussed the new wave of bitters. Today's drink takes a page from both of those ideas: looking at old-school cocktails through the modern lens of the cocktail renaissance.

The Fancy Gin Cocktail particularly benefits from today's cocktail craze. It's an old-school 19th century cocktail that could not have been easily made in the United States until recently, since its key ingredients--genever, curaçao and Boker's bitters--were not available here for quite a long time. In fact, as recently as 2007, when David Wondrich wrote about this drink in Imbibe!, two of the drink's key ingredients were not for sale in the United States.

In discussing the earliest versions of cocktails in the 19th century, Wondrich sets up three increasingly complicated (although by our standards extremely simple) drinks. First, there's the "original cocktail," dating to the early 1800s, which consisted of a base spirit (rum, gin or brandy), water, bitters, sugar and nutmeg, and, unfortunately, no ice, which was not a given for cocktails back in those days. Iteration two, the Plain Cocktail, adds ice, curaçao and the option to make the base spirit whiskey. I like version three, the Fancy Cocktail, best. It differs from the Plain Cocktail only in that it includes a citrus garnish and is served in a better glass, appropriate hallmarks of a fancy cocktail.

Wondrich noted that Boker's bitters was the leading brand of aromatic bitters of the late 1800s. He also noted that the product was no longer available and included a recipe if you wanted to make your own. Additionally, he said that he's partial to Hollands gin in the drink--Hollands gin being another name for genever, the style of gin made in the Netherlands that was popular in the United States until British gin styles came along and displaced it. After prohibition, genever was not available in United States and even by 2007, it still wasn't available. Wondrich suggested a substitute mix of gin, whiskey and sugar, but noted that it wasn't particularly adequate. Lastly, there's the curaçao. Sure, curaçao has been available in the United States. (including in blue form, which is not what you want for this drink), but it's not a good fit for the type of curaçao that would have been used in this drink the 1800s. Wondrich suggested substituting Grand Marnier.


Thankfully, today you don't have to settle for substitutes and DIY measures. You can credit today's cocktail renaissance (and Wondrich himself) for generating enough interest in these products that they are all available in the U.S. now. Bols brought its brand of genever to the United States in 2008. Wondrich himself worked with a cognac producer to develop Pierre Ferrand Dry Curaçao with 19th century flavor. And in 2009, using historical recipes, Adam Elmegirab brought back Boker's bitters.

Boker's bitters are, well, really quite bitter. They have a bit of an herbal taste and there's some spice there too, although it's not apparent at first. They strike me as particularly medicinal among the bitters I've sampled this week. Nonetheless, they work great in this drink, which is really good.

Combine genever, curaçao, simple syrup and bitters in a cocktail mixing glass with ice. Stir until cold then strain into a chilled cocktail glass. Twist the lemon over the drink, run it around the rim of the glass, then drop it into the drink.

Related Posts:
Cocktail Bitters: An Introduction and History
Old-Fashioned Cocktail (with Whiskey Barrel-Aged Bitters)
Posted by Cook In / Dine Out at 12:01 AM