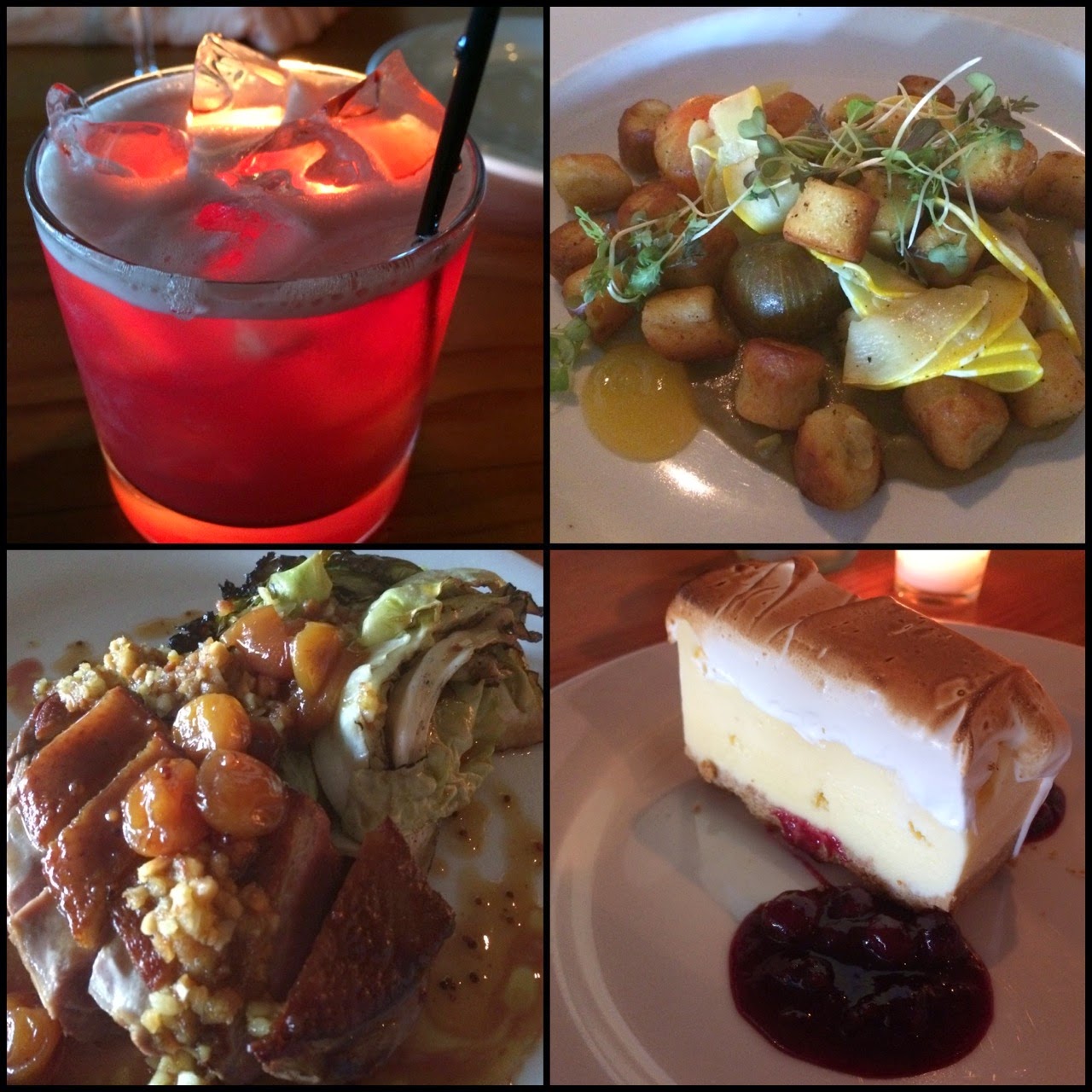 There are various reasons I choose to visit a restaurant: it's new and buzz worthy; it's older and well-regarded; there's a particular dish I just have to try. While cocktails are certainly a reason I've made trips to particular bars, this was a first in choosing a restaurant.

Over the last year, I've become a big fan of Jeffrey Morgenthaler, who writes a blog I enjoy reading and published the excellent cocktail technique book this year, The Bar Book, that I wrote about during my summer cocktails week. So when it came time to choose a restaurant for our recent Oregon trip, I immediately thought of Clyde Common, the upscale-casual downtown restaurant where Morgenthaler has worked for 5 years. As its bar manager, he's developed a cocktail menu that stands out from the pack, showcasing a range of expertly executed classic and original drinks.


Of course this meant that I had very high expectations for our drinks, and I was not disappointed. I started the night with a Bourbon Renewal, which Morgenthaler has said is the bar's most popular drink and is an original recipe (you can get the recipe from his blog). It's made with bourbon, lemon and creme de cassis--a great example of a refreshing summer bourbon drink. I also loved the Manhattan our server brought when I wanted a second drink but decided to leave the selection to him. Made with a rye whiskey, it was perfectly balanced--not to bitter, not too sweet--and went down easy.

Chris opted for a couple of great classics. His first was the Dark and Stormy, the classic trio of rum, lime and ginger, which is all the more potently gingery when it comes with house-made ginger beer as it does at Clyde Common. His follow-up was the French 75, the classic Champagne cocktail with gin and lemon. 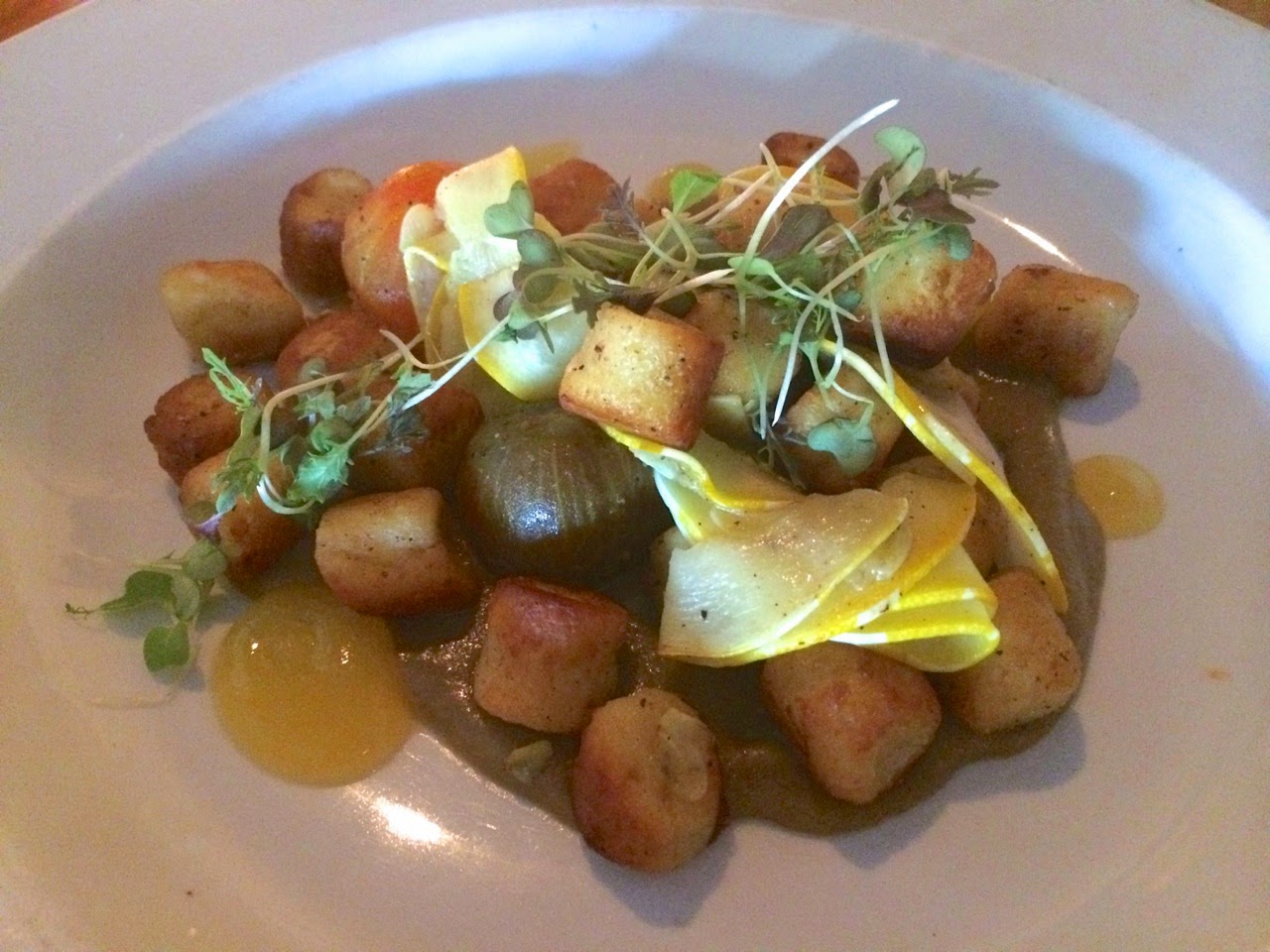 While the cocktails were what drew us to Clyde Common, its excellent food is no less a reason to visit. I was skeptical at first when our server told us--multiple times--about how fresh and local their ingredients are. Clyde Common, which has been around awhile (since 2007), may have pushed that concept in Portland, but it's pretty ubiquitous today--i'd be surprised if a restaurant of this caliber wasn't sourcing much of its ingredients locally.

But he wasn't overselling their fare. Almost everything we ate was quite tasty. The kitchen has seen some turnover lately: Clyde Common welcomed a new chef,

Two of our party's entrees were particularly noteworthy. Chinook salmon arrived perfectly grilled, tender and flavorful but not undercooked. It arrived atop beech mushrooms and snap peas given a nice char on the grill. A topping of shaved fennel and chives was a nice crowning touch of freshness (and inspiration for today's salmon dish).

I also really liked the smoked duck, which was also quite flavorful. Our server told me to expect it to be more cooked than usual, due to the smoking, but I found it to be quite tender, not at all tough. Grilled cabbage, peanut aillade (basically peanut-garlic sauce) and candied cherries enhanced the dish with a mix of pungent and sweet flavors. The gnocchi, while not up to the caliber of the salmon or duck, was a decent dish as well, served fried with zucchini and an eggplant puree reminiscent of Thanksgiving. 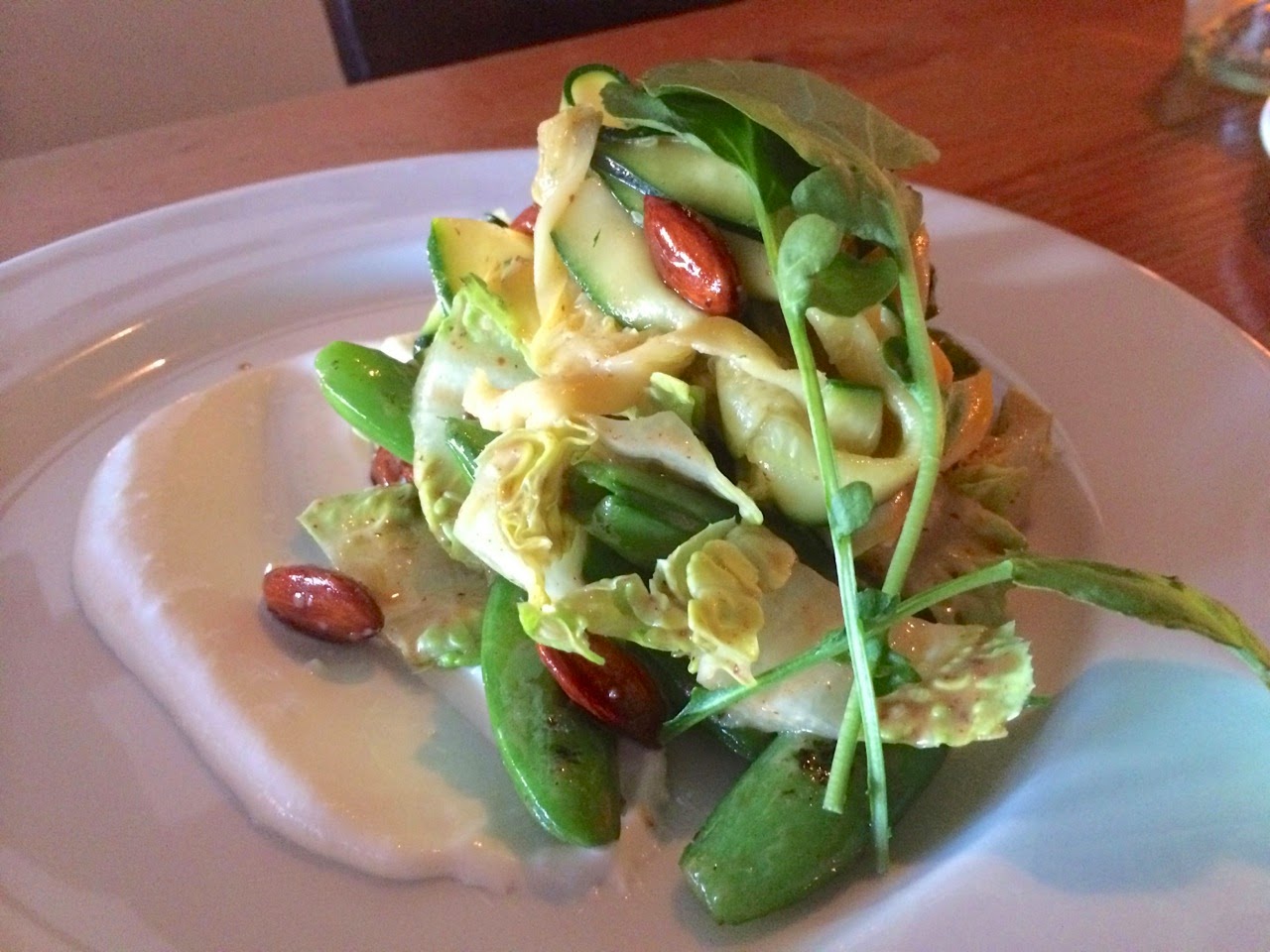 Although the entrees outclassed the appetizers, we still enjoyed the latter, especially the zucchini and snow pea salad with almonds, greens and a milky fresh ricotta. We don't often order charcuterie, so we decided to give it a try. We liked the cured meats, pickles and mustard, but were a bit perplexed by a pork shoulder spread mixed with bacon fat. I love bacon, but I don't want to eat pure bacon grease. I scraped off as much as I could to enjoy the pork shoulder underneath it, but ultimately we didn't eat much of this part of the spread.


We did, however, devour the white chocolate ice cream pie, about as perfect as an Oregon summer dessert can get. The ice cream, on top of graham-cracker crust, was topped with a browned meringue and served with a blueberry sauce. Every component was nicely done.

In addition to the great food, we also enjoyed expert service at Clyde Common. Our server copped a bit of attitude, but not in a bad way. Rather, he was playful in a fun way that fits the off-beat style of the restaurant. All of his suggestions, particularly for the cocktails, were fantastic. In an era where servers can be over-the-top serious about the food they serving, it's refreshing to come across someone who manages to have fun while still be professional.

Fun is definitely the atmosphere at Clyde Common. There's a definite energy to the place. It's also loud...very loud. I don't usually notice that, since it's pretty much the default setting at casual-upscale restaurants these days. But Clyde Common's decibels were so high that it made normal conversation difficult. I think they could address the noise level a bit to make it easier to be heard while still giving off that "buzzy" vibe restaurants shoot for these days.

Sated as we were by our meal, our even didn't end with dessert. After having mentioned to our server that Jeffrey Morgenthaler's cocktails were what drew us to Clyde Common, he suggested we go around the corner and check out Pepe le Moko, a speakeasy-style cocktail bar that opened earlier this year by one of Clyde Common's owners that also has a menu of cocktails designed by Morgenthaler. We were game and checked it out.


After the pumping rock music of Clyde Common, the mellower vibe of the bar was a nice way to end the evening. Underground Pepe le Moko's curved ceiling and old-school jazz radiate retro-cool, but its tasty craft cocktails are the reason to go. Chris sprang for the Hotel Nacional Special, a sweet-and-sour tropical blend of aged rum, lime, apricot brandy and pineapple. I briefly considered a gin & tonic, although I was surprised that Pepe le Moko doesn't stock Oregon-made gins (especially given Clyde Common's emphasis on local sourcing). So instead, I sprang for an Amaretto Sour, knowing that it's one of the classic drinks that Morgenthaler is most proud of. It didn't disappoint. The drink was frothy, sweet and refreshing.

Building an evening out around a bartender turned out to be a lot of fun and, admittedly, rather intoxicating. If you like quality cocktails, there's no better craftsman than Jeffrey Morgenthaler, and I was pleased to find that the food at Clyde Common, is mostly a good match, providing a range of original, fresh tastes in an upbeat, spirited atmosphere.