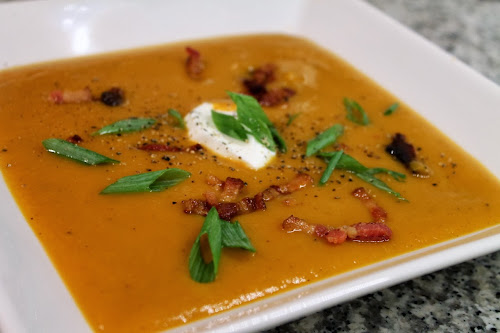 Squash just begs to be pureed, which is why it works so well in soup. Butternut squash pairs nicely with apple, the former's earthiness contrasting with the latter's tartness.

I wanted my soup to have a nice tang, so I added a little balsamic vinegar too. I also wanted some good smoky notes, so, in addition to the bacon, I tossed in some smoked paprika. Cumin, ginger and coriander add some additional spice.

The dollop of Greek yogurt is optional, but I like that it adds a little sour creaminess. Certainly, you could also use sour cream, but yogurt, particularly nonfat, is obviously a more healthful choice.

There are lots of recipes out there for this kind of soup. The recipe I started with was Fine Cooking's, although I've changed it in so many ways that it I don't think this counts as an "adapted" recipe. 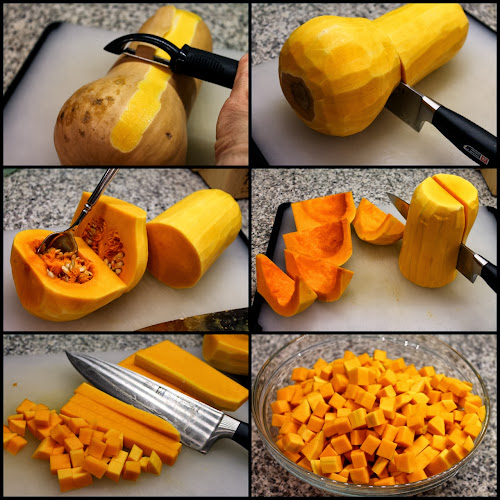 Working with a whole butternut squash can be daunting. Although it's easy to use the pre-peeled squash cubes (which I do sometimes), they are more expensive than starting with a whole squash, especially when you want this much. Here's how I recommend dealing with it:

1. Heat an enamel-coated cast iron Dutch oven, deep-sided sauté pan or other large soup pot over medium heat. Add bacon and cook until brown and crisp. Remove bacon with a slotted spoon and transfer to a paper towel-lined plate. Leave the rendered bacon fat in the pot.

2. Increase heat to medium-high. Add butternut squash and onion and cook, stirring occasionally, until the onion is translucent and the squash has softened, about 10 to 12 minutes. Add apple, ginger, cumin, coriander, smoked paprika and pepper, stir to combine and continue cooking another 5 minutes. Add broth, increase heat and bring to a boil. Reduce heat to medium-low and simmer, uncovered, for about 8 to 10 minutes. Remove from heat.

3. Stir in balsamic vinegar. Using an immersion (stick) blender, puree to soup until smooth (alternatively, transfer in batches to a blender and puree). Serve soup in shallow bowls topped with a dollop of Greek yogurt and a sprinkle of bacon and scallions.
Posted by Cook In / Dine Out at 12:00 AM