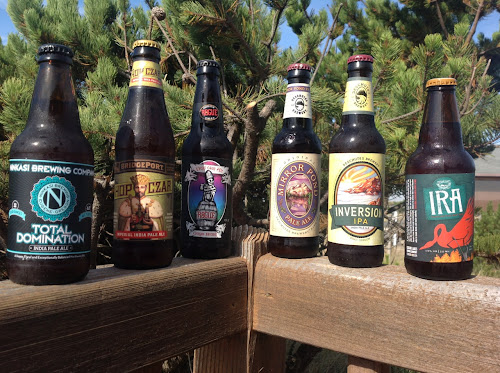 We admit it: we're hopheads. Chris and I probably won't be satisfied until someone brews a bottle that comes with actual hops floating in it. Until then, we're reasonably satisfied with the selection of hoppy IPAs and amber ales available on the east coast. DC Brau's The Corruption IPA is a current favorite, but we're also big fans of Troeg's Hopback Amber Ale (not so much into Dogfish 60-Minute IPA as we used to be, but it's still good on occasion).

But our occasional visits to Oregon mean an opportunity to sample the state's embarrassingly good variety of craft ales. Hoppy beers are naturally at home in Oregon, arguably one of the finest regions for American-made craft ales, particularly India Pale Ale (IPA).

During our recent visit, we sampled quite a few fine varieties. After coming home, I was still entranced by our favorite--Ninkasa's heady Total Domination Ale--and sorely disappointed to discover it's not sold in D.C. I tried to commiserate with a can of Corruption IPA, but by comparison, it tasted flat and one-dimensional.

Here's a rundown of what we tried:

Total Domination Ale, Ninkasi Brewing Company, Eugene, Oregon (American IPA, 6.7% ABV). Hands down our favorite beer of the group: a deliciously assertive IPA with intensely bitter hop flavor and a clean finish. It's flavor isn't particularly malty, which I like.

Inversion IPA, Deschutes Brewery, Bend, Oregon (American IPA, 6.8% ABV). Deschutes Brewery has been around for awhile, so I'm surprised that I still don't see their beers on the East Coast yet. The Inversion IPA is a great brew for hop lovers. Its flavors are nicely balanced: it's strongly hoppy and bit malty, with a flavor that leans toward fruity.

Hop Czar Imperial IPA, BridgePort Brewing, Portland, Oregon (American Imperial Double IPA, 7.5% ABV). This is definitely hoppy. It has a light, cloudy amber color and a thick texture. Tasty, but not as easy to sit around and drink all afternoon.

India Red Ale, Cascade Lakes Brewing Co., Redmond, Oregon (American Amber/Red Ale, 6.8% ABV). Apart from the IPAs, this was another favorite. It has a balanced hop and malt flavor with a somewhat smoky taste, almost like a porter. Ruby amber color.

Mirror Pond Pale Ale, Deschutes Brewery (American Pale Ale, 5% ABV). I remember I used to like this. It's not bad, but compared to the IPAs it doesn't stand out as a favorite. It has a light amber color with visible yeast. It's pretty floral and malty, but not very hoppy, at least not to me.

Dead Guy Ale, Rogue Ales, Newport, Oregon (Maibock, 6.6% ABV). This one should be familiar to many, since it's distributed nationally. It has a cloudy, dark amber color and a malty, but not too hoppy flavor. I didn't think this was as interesting as the other beers we sampled. If I get tired of hops and want something malty though, it's not a bad choice.