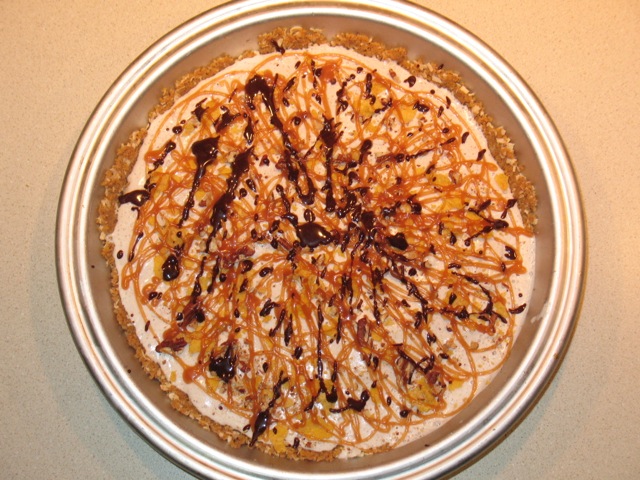 Where I work, we have this unusual interest in competitive dessert-making. And considering that I like to cook and am fairly competitive, I'm all over it.

I almost didn't enter the contest. I wasn't feeling inspired until the day before when it hit me...the perfect counterpoint to the surprisingly D.C. late winter heat wave: ice cream pie.

One of my favorite desserts my grandmother made when I was a child was ice cream pie. She had two versions: the first, which was so easy I learned to make it, was a crust of Rice Crispies, peanut butter and corn syrup filled with vanilla ice cream. The other was a little more complicated, with a crunchy-sweet Corn Flake/coconut crust. That's the one I was interested in.

But then Google showed me something even more enticing: an ice cream pie inspired by the popular Mexican restaurant dessert: fried ice cream. I used two recipes as reference points to develop this dish, one from the Fat and Happy blog and one from the discussion section of a Jamie Oliver blog.

Those two recipes had the same amount of Corn Flakes, but vastly different amounts of brown sugar and butter, so I split the difference. I also used pecans instead of almonds, which I toasted first on the stove. 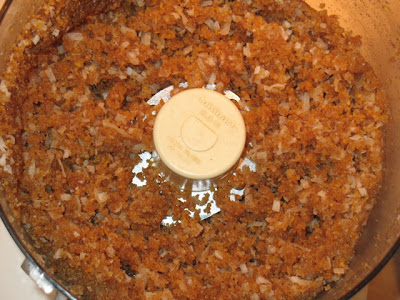 Homemade ice cream would be amazing in this dish, but I wanted to keep it simple, so I used a cheater's method: mixing ground cinnamon into softened vanilla ice cream. It was still pretty tasty, but not as amazing as actual cinnamon ice cream (which I made for Thanksgiving last year, yummy!). 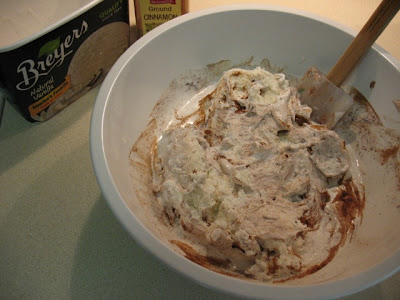 To top the dish, I set aside a little bit of unground Corn Flake, pecan and coconut mixture, and made a simple caramel sauce. I still had some dark chocolate sauce leftover from the olive oil ice cream sundae, which I also drizzled on the pie. 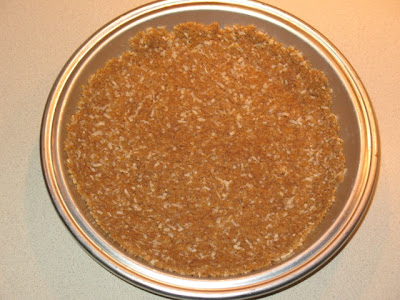 This was pretty tasty. I love the crunchy crust, which has a surprising lightness to it. And my coworkers seemed to agreed, as I won the best sweet pie award.

2. Toast pecans in a small frying pan over medium-low heat until fragrant and browned (if desired, set aside a small amount of pecans, Corn Flakes and coconut as a topping for the finished pie). Pulse pecans in a food processor until finely ground. Add Corn Flakes, brown sugar and coconut and pulse until ground into crumbs. With the processor turned add, slowly add the melted butter in a stream.

3. Dump ground mixture into a buttered pie plate. Using a spatula or your hands, press the mixture firmly and evenly across the bottom of the plate and partway up the sides. Bake in oven about 10 minutes to firm up the crust. Allow crust to cool and then put it in the freezer until cold.

This makes just under a cup of caramel sauce, enough to drizzle on the pie and have leftovers for other uses (like topping ice cream or cake).

1. Heat sugar and water in a 2-3 quart saucepan over medium heat until the sugar dissolves and the mixture boils. Continue boiling until the mixture turns golden brown--watching carefully to avoid it burning too much.

2. Remove from heat and carefully (it will sputter) and slowly add the heavy cream in a steady stream while whisking cooked sugar. Return mixture to low heat and whisk for a couple minutes until smooth and thick. Set aside to cool and store in a container in the refrigerator.
Posted by Cook In / Dine Out at 7:47 AM