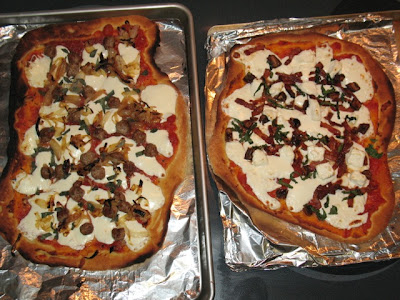 Conventional wisdom says that crispy thin-crust pizza is one of those foods best enjoyed at restaurants. The thin, crispy, satisfyingly charred crust you get at a good pizzeria is difficult, if not impossible to replicate without a pizza oven. Professional brick ovens cook much hotter than a home oven, which often tops out at around 500 degrees (and takes a very long time to get that hot).

Based on most recipes for making pizza at home, the best you can hope for is chewy soft crust or maybe a crispy but not charred crust if you use a pizza stone--a heavy, cumbersome thing. Well, I wasn't going to settle for that. I was determined to use my modest home oven to deliver a thin-crust pizza with a crispy and charred crust with the toppings nicely blasted as well.

The major culprit is the pan. When a pizzeria puts a pizza in a brick oven, it sits right on the oven bottom which is already searing hot, making the underside of the crust crisp and charred. At home, most people make pizzas on baking sheets. If you assemble the pizza on a cold baking sheet and pop it in the oven, the crust will bake but not become crispy on the bottom (preheating a baking sheet is a bad idea, since it can warp). To address this problem, the home cook can turn to a pizza stone, which is preheated and then the assembled pizza is put on top. Since you don't want the pizza stone sitting on top of the oven getting cold while you assemble the toppings on it, you have to transfer the pizza onto it using a pizza peel, that big wooden oversized spatula-looking thing. That sounds like a real hassle to me and, as a small-kitchen cook, I just don't have the space for that stuff.

An idea hit me: why not use the broiler to char to crust? If the broiler can char many other things quite successfully without producing a lot of smoke, couldn't it do the same for pizza? I searched the web to see if anyone else has attempted this and didn't find anything. People are using their broilers to char their toppings, but I didn't see anyone who'd attempted to use it for just the crust (I did read a story about someone who used the broiler to preheat their pizza stone, which caused the stone to split in two, further assurance that my decision to not buy a pizza stone is sound).

My plan was this: 1) bake the crust in a really hot oven, 2) For the last two minutes of baking, turn on the broiler to char the crust, 3) take the baked crust out of the oven, flip it over, and top it, 4) return the pizza under the broiler to melt the cheese.

I kept the dough simple, using Mark Bittman's recipe of flour, yeast, salt, olive oil and water, mixed in a stand mixer. Once kneaded, the dough is soft and pliable. 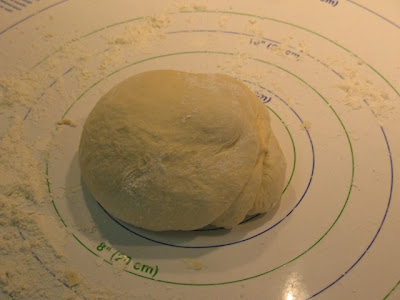 For the tomato sauce, I sautéed a couple of cloves of minced garlic in olive oil and then added a container of Pomi chopped tomatoes, dried oregano and thyme, a pinch of red pepper flakes, and seasoned salt and fresh-ground black pepper. 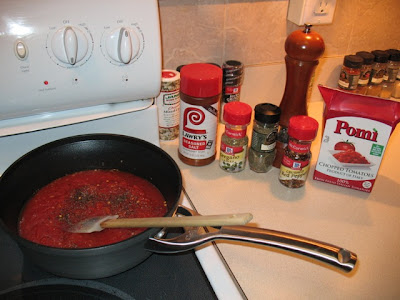 For the toppings, I wanted a meat, a fresh herb, and something sweet for each pizza. Variation one was Italian sausage, caramelized onion and sage. Variation two was bacon, dates, basil and goat cheese. Both pizzas had tomato sauce and fresh mozzarella. 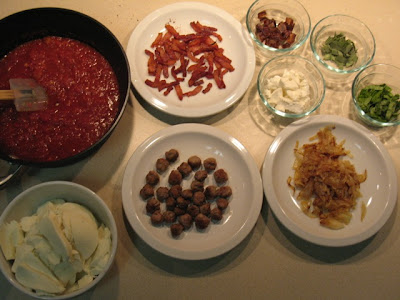 You can shape the dough by rolling it out or just using your hands. After dividing the dough into two balls, I rolled each one out a little bit and then used my hands to shape it further. You can do this in the air: toss the dough back and forth between your hands, and its weight will stretch it out. This makes the middle thinner than the edges, which is good for making the edge crust a little thicker. I'm not very good at getting an even shape, and I aim for something a little oblong to maximize space for toppings. 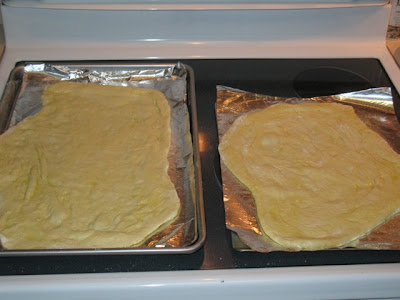 After baking the dough for about 10 minutes, I turned on the broiler and broiled each crust for about 90 seconds. I had to watch it carefully, since it can easily go from being nicely charred to inedibly burnt. The results were as good as I'd hoped for, especially the crust on the right in the picture below, which was more uniformly browned (that dark patch on the left may look ominous, but it wasn't too burnt--it was good). 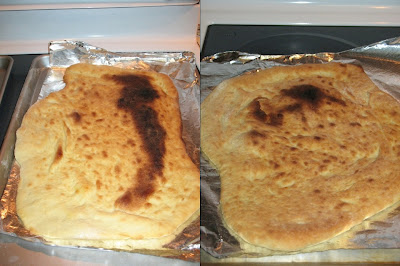 After the broiling, I flipped both crusts by first putting a piece of aluminum foil on top of the charred dough and then an inverted baking sheet of the same size as the one the dough was baked in. Then I carefully inverted the whole thing so the charred side would now be on the bottom of the second baking sheet. I layered the toppings on each pizza and then put them back in the oven under the broiler to finish. 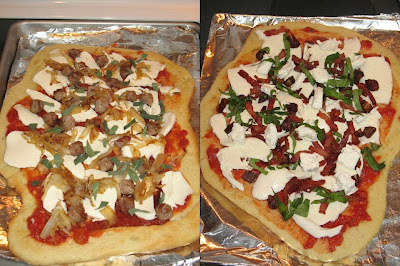 The last broil is to warm the toppings, melt the cheese, and char the exposed edge crust. This isn't enough time to actually cook the toppings, so to the extent they need to be cooked (like the meats and the onions), that should be done separately. 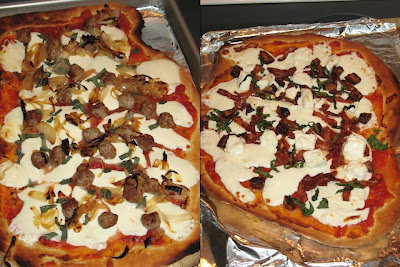 The results were good. Because the crust was baked by itself, the whole thing was pretty crispy--even the side that touches the toppings, which would normally be a little soft. The flavor was good though and I got the char I wanted on the crust.

Pizza toppings:
(use any combination you like, but be careful not to overload the pizza)
Sauces: use the tomato sauce above or try pesto, barbecue sauce, pureed roasted butternut squash, or omit the sauce to make a "white" pizza.
Cheeses: fresh mozzarella or whole milk mozzarella, crumbled cheeses like goat or blue, grated cheeses like parmigiano-reggiano, aged gouda or pecorino romano
Meats: Italian sausage (mild or hot), bacon (sliced or slab), pancetta, Canadian bacon, pepperoni are all good (be sure to cook the raw ones completely first).
Vegetables: Onion (raw, sautéed or caramelized), bell pepper (red or green, raw, roasted or pickled), broccoli (roasted or sautéed)
Other: mushrooms, olives, pine nuts, walnuts, figs, dates, fresh herbs (basil, sage, oregano, etc.), the possibilities are endless.

Make the pizza dough:
1. In a stand mixer, using the paddle attachment, combine the flour, yeast and salt. Add the water and then the olive oil and mix until the dough forms a ball and is sticky to the touch. If needed, add additional flour if too sticky or additional water if the dough is still dry (it should come together quickly, like 30 seconds quickly).

2. Transfer the dough to a flour surface and knead, adding with flour hands to form a smooth, round ball.

3. Transfer the dough to a large, oiled bowl and cover the bowl with plastic wrap. Let the dough rise at room temperature for about 2 hours. If not using immediately, you can refrigerate it at this point.

Make the pizza sauce:
1. Heat olive oil in a saucepan over medium heat. Saute the garlic until soft and fragrant (but not brown). Add the tomatoes, herbs and spices and reduce heat to simmer about 10-15 minutes until the flavors and combined and the sauce has thickened.

Prepare the pizza toppings:
(Depending on what you're using, this is a good time to saute meats and vegetables and have other ingredients chopped and ready for use.)

Cook the pizza dough:
1. Position an oven rack to the highest position about 4-5 inches from the broiler (depending on the size of your baking sheets, you may not be able to bake both pizzas on the same level so, if needed, position the second rack about two notches down). Preheat the oven to 500 degrees (for many ovens, this will take a very long time, so be sure to provide time for heating the oven sufficiently).

2. Prepare baking sheets for pizza (I put a piece of aluminum foil down on each sheet and sprayed it with olive oil). Have a second backing sheet of the same size ready for each pizza. Divide the pizza dough into two balls and allow to rest on a floured surface for about 20 minutes. Roll doughs out slightly and then shape by hand. Place shaped dough on baking sheet. Spray or brush top of dough with olive oil.

3. Bake dough in oven for about 10 minutes. Turn on oven broiler and broil each dough under the broiler for about 90 minutes until evenly browned and charred in places (watch it carefully during the broiling). If broiling crusts separately, set aside second crust until ready for broiling.

4. Remove broiled dough from oven. Place an oiled baking sheet (or an oiled piece of foil and a baking sheet) upside down on top if cooked dough. Carefully, using oven mitts, invert the two baking sheets to transfer crust from one sheet to the other. The charred side of the crust should now be face-down on the second pan. Layer toppings as desired onto crusts (I like sauce first, then cheeses, meats, vegetables and herbs). Return topped pizza to oven broiler and broil until cheese is melted and browned in places (about 2 minutes, watched continuously to prevent burning). Remove pizza from oven and serve.
Posted by Cook In / Dine Out at 7:36 AM