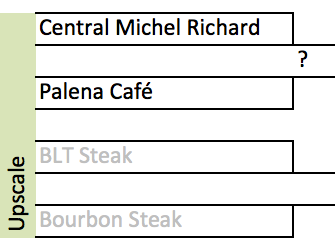 The Central burger arrives and smells delicious. It's pretty thick, with a juicy medium-rare patty, cheddar cheese, bacon, caramelized onions and a little dab of mayo, but the rounded bun nonetheless holds up against these fillings. An innovative touch is the thin layer of toasted bun between the top bun and the fillings to help keep bun-sogging at bay. The meat is very flavorful and perfectly cooked. The smoky bacon is tasty, although not as thick as i'd like. This is a solid burger that would probably go far in this competition if it didn't have to compete against Palena.

The Palena burger arrives comparatively unadorned: there are no vegetables on it and, although there are pickles on the side, they aren't meant to be put in the sandwich. The lack of toppings says confidence, and it's deserving. The inch-thick patty packs a lot of flavor. The garlicky house mayonnaise and truffled cheese add counterpoints without overpowering the beef. The bun feels soft and springs back to the touch, but is hefty enough to not feel soggy in the slightest. This burger doesn't need the fanfare of grilled onions or sesame seeds because the few choice flavors serve to subtly punch up the already perfectly cooked beef patty. It's also nice that at $12, it's a real bargain compared to the other upscale burgers.


Palena Cafe. These are both excellent burgers that pack a lot of flavor. Central's has some interesting touches, but Palena's is so superior that it doesn't need them.
Posted by Cook In / Dine Out at 4:06 PM