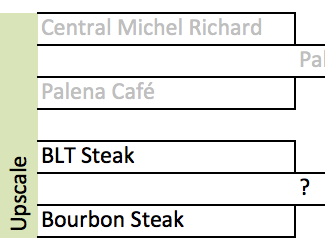 BLT Steak, the downtown steakhouse that's a favorite of the First Lady, and Bourbon Steak, the new-ish lobby restaurant in the renovated Georgetown Four Seasons Hotel, are known for their steak, but they make good burgers too. In both cases, getting the burgers may take some planning: BLT Steak only serves theirs at lunch and they're not open for lunch on the weekend. Bourbon Steak serves theirs only in their bar (which thankfully is open on the weekend, but not for lunch).

The burger at BLT Steak is tasty, but it gets sunk by a fatal flaw: raw onions. You take a gamble when you put raw onions on a burger. Some can be so strongly flavored that they overpower the meat, which is exactly what I experienced with my burger. Otherwise, it was pretty good, with a thick, well-seasoned patty and a choice of cheese (blue cheese was good but the cheddar was better). The sauce, a sort of steak sauce, was also quite tasty. The bun, however, sort of fell apart, lacking enough structure to hold up to the meat and toppings.

Bourbon Steak's burger was fantastic. The thick patty, cooked medium, was done just right and quite flavorful. The toppings were a mild cheddar cheese and shreds of lettuce tossed with "secret sauce" (a thousand island derivative). The rounded bun was toasted and held its own against the other components.

Bourbon Steak. BLT Steak's burger was good, but the overly powerful onions and bun were its downfall, while Bourbon Steak was among the best burgers I've had so far in this competition.
Posted by Cook In / Dine Out at 4:12 PM