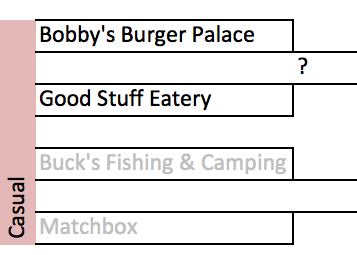 Good Stuff has enjoyed palpable buzz since opening four years ago. On a recent Saturday, the place was packed and the line was out the door by noon. With such obvious public good will, I was expecting something really extraordinary. Unfortunately, the results are only average. The burger comes wrapped and squished, destroying any visual appeal it could have enjoyed. The patty is good--flavorful and thick. The bun is pretty good too. It's chewy and holds up against the toppings. Ah, the toppings. They were unremarkable, especially the bacon and the tomato, which the menu claims is "farm-fresh" and "ruby-red," but in reality is rather anemic-looking. The American cheese is pretty flavorless. The Good Stuff sauce is just a little dollop of thousand island. Overall, the toppings are not well-integrated with the rest of the sandwich. With a little more care, this could have been a better burger.

Bobby's, on the other hand, was a nice surprise. The patty is thick and meaty and, although the server recommended I get it medium-well, it is not overcooked. I really like the bun, which is nicely structured, covered in sesame seeds and lightly toasted. It holds the sandwich together well. The toppings mostly work well too. The American cheese is not great, but the lettuce and tomato are fresh and the raw red onion does not overpower the other ingredients. The burger arrives with no sauce, but the restaurant offers five choices at the table. I pick what I assume to be the most standard choice besides ketchup: the burger sauce, a dark brown sauce somewhere between steak sauce and mole. It provides a nice nutty, meaty richness.

Bobby's Burger Palace. While both meat patties scored well, Bobby's better toppings and overall better integration of flavors puts his burger on top.
Posted by Cook In / Dine Out at 4:25 PM