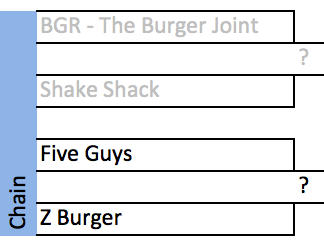 Five Guys is a national chain, but it started locally in Alexandria, Virginia. Lots of people rave about it around here, but I have to say, I was not impressed. In fact, it was my least favorite burger in the contest. I had my Five Guys burger "all the way," meaning it came with ketchup, mustard, mayonnaise, lettuce, pickles, tomato, grilled mushrooms and grilled onions. Although it comes standard with two patties, I ordered the "little" version with just one, since that's more comparable to the other burgers. The burger had a decent balance of flavors. My medium-cooked patty was not too salty, however it was pretty flavorless. I liked the pickles and the lettuce was fresh, but the tomatoes were really anemic looking and about as devoid of flavor as you'd suspect. I like that sautéed onions and mushrooms are available at no extra cost, although the onions weren’t really very cooked. Bacon was crisp but not very smoky. Cheese was American, but not the kind that sticks to your mouth. The sesame seed bun was disappointing—doughy and not substantial enough to support all those toppings, making for a messy burger.

Z Burger is also a homegrown chain, although one that so far has only two locations (both in D.C.). Their menu appears designed to compete against Five Guys, as it comes standard with the same toppings, including fried onions and sautéed mushrooms. Unfortunately, it also comes with a lot of the same problems. The toppings are quite tasty--the vegetables are noticeably fresher than those I got at Five Guys and the bacon is better too. But they're too much for the slight bun, and the burgers here have a tendency to fall apart while you're eating them. The patty is so-so, not too salty but also not very flavorful.

Z Burger. I'm not really blown away by either of these burgers, although the overall better flavors gives Z Burger the advantage.