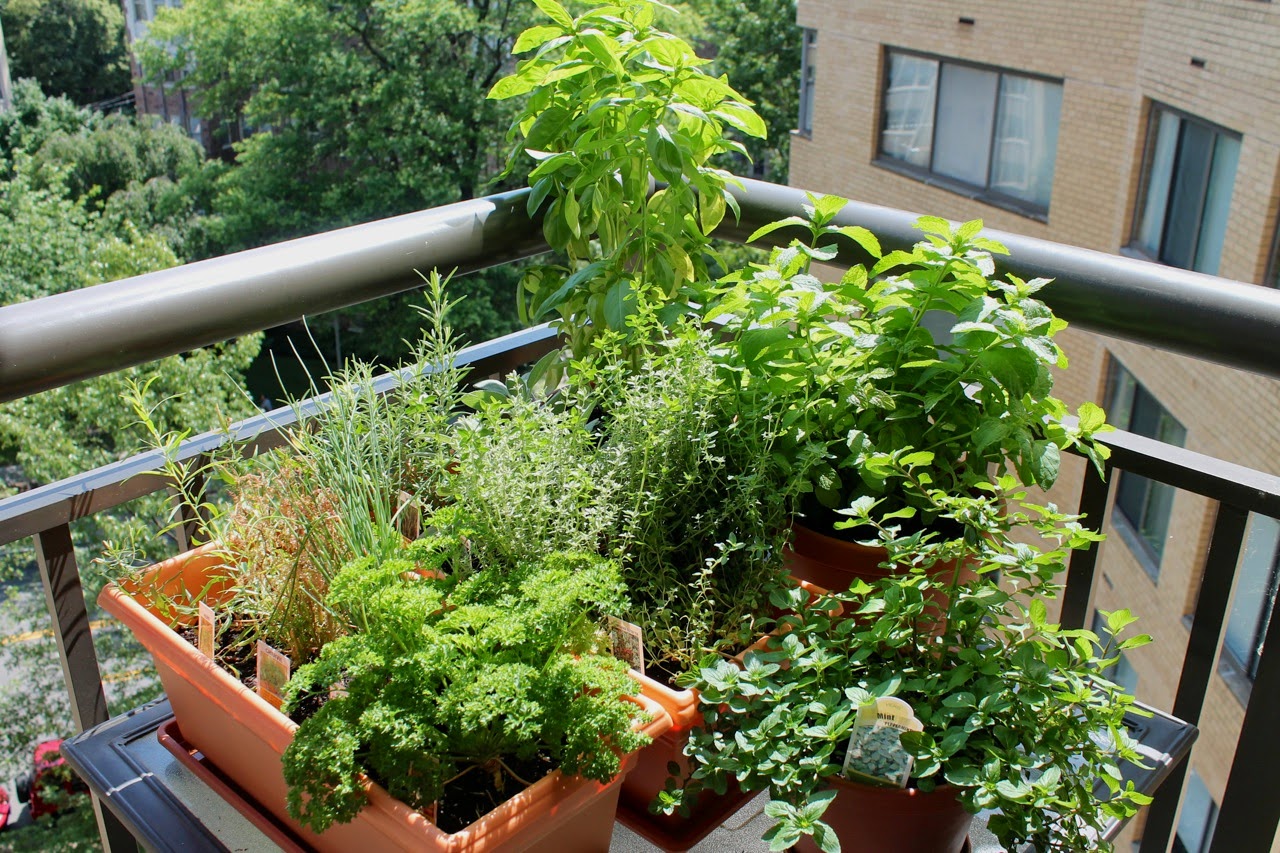 It's nearly 3 months into the balcony container herb garden project, so I decided it was time for a check-in. Here's an update on what's been happening with the basil, mint and tarragon, all of which will appear in recipes on my site this week. I'll also talk about the chervil, which, unfortunately isn't doing so well.

In the last installment, I documented how I had trouble with my basil. The first plant withered away and seemed all but dead, so I discarded it--a victim of D.C.'s unseasonably cold April, I concluded. I tried again with a second plant. This one started off much better, doubling in height pretty quickly. Then things took a turn for the worse. The growth halted, and many of the leaves started turning yellow with brown splotches. While it wasn't so bad that I thought it was lost, it definitely needed an intervention and fast.

I turned to the Web (as well as my mother, an avid gardener) for advice. One of the tricky things about growing plants is, like pets, they can't tell you what's wrong. You have to look for signs. Unfortunately, sometimes signs can be interpreted the wrong way. For example, I learned that yellowing leaves can be a sign of both under- and over-watering. So how to know which it is? With regard to watering, I think the trick is learning to water properly.

Consider the soil. When you water the plant, the top layer of soil will instantly become saturated, whereas lower layers will only get wet from water that trickles down through the soil. If you only add a little bit of water, the top layer of soil and the roots in it will take up all the water and the lower layers will remain dry. However, there are roots down there too and they need water. So when watering, it's important to give the plant a good, long drink. Keep watering until a little bit of water drips out from the bottom of the plant, that way you know that you've watered all of the soil and not just the top layers. I like to add the water in increments with pauses between them to let the water trickle down. If you water in a constant stream, you could end up adding too much and then a lot of water will be dripping down, potentially overflowing the drip plate.

Watering in full like this doesn't need to be done everyday. Or even every 2 days. You should check the soil first with your finger. If you stick your finger into the dirt about an inch or two down and feel moisture, it's not time for watering yet. Better to let the plant continue drinking. If it's dry, then it's time for a drink. Using this method should ensure you don't under-water the plant by wetting only the top layer (or letting the whole thing dry out) nor over-water it by adding water when the soil is already damp and doesn't need more.

The other thing I've done with the basil is repot it. Initially, I had the basil in a 7-inch pot. I knew it should be all by itself so that it could spread out, but this pot proved to be too small. I moved up to a 10-inch pot, which might still be a bit small for basil, but so far it seems to be working fine. Since this is a balcony garden, I don't have a lot of room to keep transplanting into larger pots, but this move worked out great. I was grateful to have my mother's assistance with doing this during her recent visit. Here's what we did: 1) carefully removed the basil from the pot, 2) transferred the remaining potting soil from the old pot into the new one, 3) added additional potting soil until the pot was about half full, 4) placed the basil plant in the pot, 5) filled in the space around the plant with more potting soil, being careful to avoid air pockets. Not so hard actually. One thing we did was skip the step of putting gravel in the bottom of the pot. My mom she said she'd never heard of doing this. She was concerned that the gravel takes up room in the pot that could otherwise be used for the roots and that it's really not needed for drainage, since the holes in the bottom of the pot provide enough drainage.

So far, the re-potting has been a great success, as the once scrawny basil is now flourishing, having grown quite a lot and turned a much healthier shade of green. 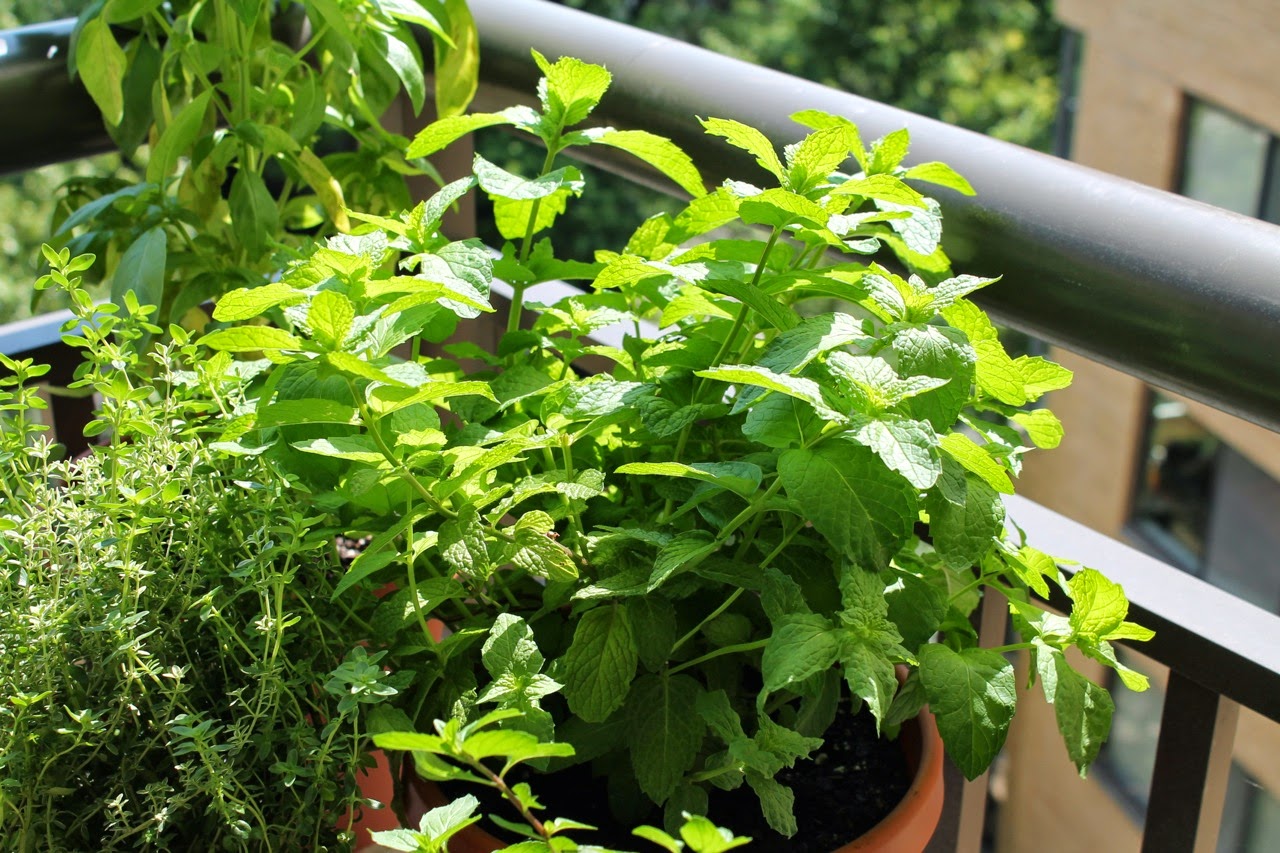 Although it never looked as bad as the basil, the mint also took a bad turn shortly after my last update, and I think it was for similar reasons. Mint also likes to spread out, and I put two mint plants in one 7-inch pot: spearmint and peppermint. I think this was just too much mint for a small pot. So I re-potted the spearmint into a larger 10-inch pot and left the peppermint all by itself in the smaller pot. So far, this has turned out to be an excellent choice, as both plants are flourishing now. In fact, the spearmint, which before was never a vibrant green, is a beautiful shade now, and the plant is quite bushy. The peppermint is still smaller, but that's fine, as I don't expect to use it as much.

The tarragon has been a bit surprising, in that it hasn't really "taken off" like most of the other herbs, although it doesn't look unhappy. It just doesn't seem to grow very fast. I feel like I have barely more today than when I planted it, unlike, say, the thyme, which has grown like crazy. Not sure why this is the case. According to this source, it grows slowly (and interestingly doesn't grow from seed), so perhaps I just need to be patient. Luckily, it's not an herb I use often.

I think it's time to bid "adieu" to the chervil (you can see it next to the tarragon in the photo above). After a wonderful start, the plant has withered away and dried out. I think it's a goner. After the flowers appeared, the plant started producing seeds and once that happened, I think it gave up, having completed its circle of life for the season. Maybe later in the summer I'll think about getting another one.
Posted by Cook In / Dine Out at 12:00 AM

Email ThisBlogThis!Share to TwitterShare to FacebookShare to Pinterest
Labels: herbs