Where There's Smoke but No Fire: Smoke-Brined Oven BBQ Chicken 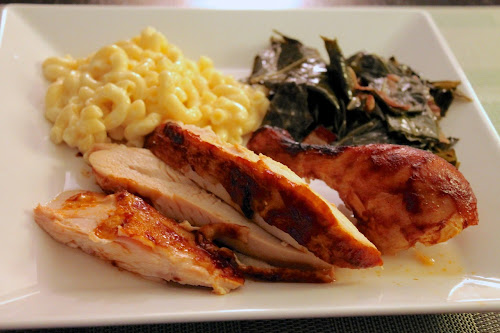 Barbecue, chipotle, mezcal...anything smoky and I'm there. It's a challenge though, as an urban apartment dweller, to get smoky flavors into my food, since where we live we're not allowed a grill. With Labor Day coming up to signal the unofficial "close" of summer, I wanted to prepare a traditional barbecue meal made indoors that came as close as possible to satisfying my cravings for the outdoor experience.

Seasonings are another good way to go: chipotle chili powder if you want a fiery kick with your smoke; smoked paprika if you don't. There's also smoked salts available, although I've not had a lot of luck with them.

However, there are times when you don't necessary want smoked cheese or spices in your dish, but you still want smoke. That's when liquid smoke is a good option to turn to. Liquid smoke is real wood smoke that has been condensed to liquid form. I used Colgin Natural Hickory Liquid Smoke for this recipe. I've used it before in barbecue sauce and chili and it imparts true smoke flavor. Sometimes I'll add a dash to chicken while it's sautéing. Here I went a different route though: I decided to use it in a brine. 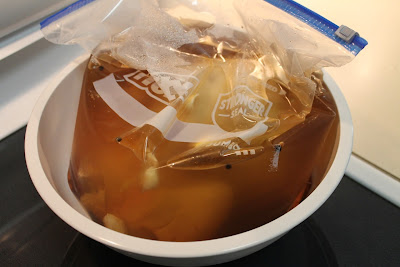 Brining is typically done to add moisture to meat--the presence of salt facilitates moisture transport from the brine solution into the meat. (For discussion on how brining works, see my Brined Roasted Turkey Breast; for another previous brined poultry recipe, see also Spice-Brined Roast Chicken a la Palena). But you can also use the process to add flavor, since flavors in the brining liquid will be carried along into the meat. I've done it before with spices, so I decided to try it with liquid smoke.

I used 3 tablespoons of liquid smoke, which may seem like a lot, since typically you only use a teaspoon or so in recipes. However, unlike in a sauce, you're not going to consume the brining liquid, so it's important to achieve an adequate concentration. Were I making this again, I might up the smoke to 1/4 cup, actually. 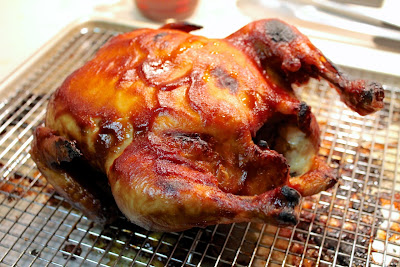 The resulting chicken was delicious and subtly smoky. Yes, It lacks the smoky intensity of actual barbecue, but there's definitely a smoke element in the meat beyond just what would be in the barbecue sauce. It reminded me a bit of the roasted barbecue chicken I had earlier this year from Blue Duck Tavern.

1. Combine the 2 cups water, salt, sugar, syrup, mustard seed, peppercorn, chili powder and garlic in a medium saucepan over medium heat. Heat, stirring frequently, until the salt and sugar have dissolved. Remove from heat and stir in the liquid smoke. Allow mixture to cool (you may cool it faster by using ice--be sure to then reduce the 3 quarts of water in equal proportion). Transfer to a brining bag (I used a 2-gallon sealable freezer bag) and add the chicken and remaining 3 quarts of water. Refrigerate overnight--up to 24 hours--as the chicken brines.

2. Preheat oven to 450 F with oven rack in middle position.

3. Remove chicken from brine, rinse and pat dry. Place chicken on an oven-safe cooling rack set inside a sheet pan (alternatively, place the chicken in a roasting pan). Spray chicken all over with olive oil. Roast until the chicken starts to brown, about 20 minutes. Reduce heat to 425 and continue roasting until the chicken reaches an internal temperature of 165 F. Remove from oven.

4. Turn on the oven broiler. Slather the chicken with barbecue sauce, then put back in the oven. The sauce will dry out and brown a bit--watch carefully to prevent burning. Remove when the sauce looks evenly dry and a little brown. Allow the chicken to cool slightly before carving. 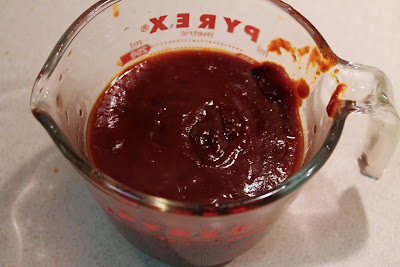 North Carolina-Style Barbecue Sauce
Adapted from a recipe by Derrick Riches for About.com

I liked this recipe because it's a pretty simple and traditional barbecue sauce. So that it would work better for coating the chicken, I made it thicker by adding tomato paste. I also added some liquid smoke flavor.

Makes a little over 1 cup

Mix all ingredients together in a medium saucepan. Bring to boil over medium heat, then reduce heat and simmer for 10-15 minutes until thickened.
Posted by Cook In / Dine Out at 12:00 AM