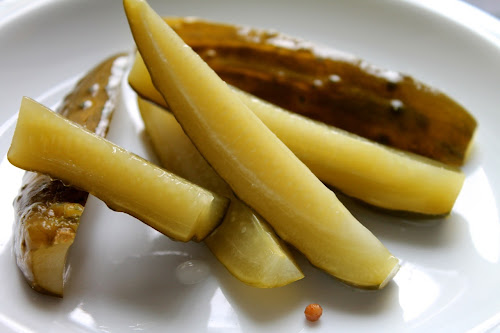 More and more I'm finding that pickles shouldn't be viewed as just an ignorable garnish. They can be quite tasty. I'm particularly fond of the pickles The Carving Room serves with sandwiches and salads. I also really like the pickle plate at DGS Delicatessen. But until recently, I'd never tried making my own.

Cathy Barrow, writer of the Mrs. Wheelbarrrow's Kitchen blog and occasional contributor to both the Washington Post Food section and New York Times Dining section, recently wrote about making homemade sour pickles. It's surprisingly easy. The base recipe requires just three ingredients: pickling cucumbers, water and salt. After that, you're free to include (or not) other flavorings such as garlic, jalapeño, dill and coriander seeds. I'm sure other herbs and spices would be welcome.

I chose to keep the pickles pretty simple with some fresh dill and coriander seed. Cathy recommends using filtered water if you're not sure whether your tap water is chlorinated, since chlorine inhibits the microbial process necessary to make the pickles. I did some research and discovered that D.C. tap water is, in fact, not chlorinated (except for a brief cleansing period in the spring). So I gave tap water a try and all worked out great.


According to Barrow, it takes 3 days for the pickles to be ready. If you leave them out longer they'll be more sour, so you can go as long as 5 days if you prefer. I split the difference and refrigerated mine after 4 days, after which they'll keep in the fridge for a month.

Nothing much happened after the first day, but after 2 days the brine was getting cloudy and little bubbles rose up if I gently shook the jar. I tasted the pickles after 3 days and decided they weren't sour enough, so I left them out one more day before refrigerating them to basically stop (or rather drastically slow) the fermentation process. These pickles are not the kind that will keep long term--for that, you have to apply a canning process to seal them, which is not something I've ever tried. These are "refrigerator pickles"--ones you can make easily and enjoy in the short-term.

Since August is National Sandwich Month, I wanted to make a great sandwich that would showcase these delicious pickles. I went with a Cuban, a classic sandwich of ham, cheese, pickles and mustard.

1. Bring water and salt to boil in a medium saucepan, stirring until salt is dissolved. Remove from heat and add 1 cup of ice. Stir until the ice has melted and the brine mixture has cooled.

2. Wash cucumbers thoroughly. Cut a little bit off both ends, then cut cucumbers into spears, chunks or a mixture (you can also leave them whole).

3. Pack cucumbers into a clean quart jar. Add dill and coriander seeds. Pour the cooled brine into the jar. Put a lid loosely on the jar and place it in a bowl (since the jar may leak a bit during the fermentation--mine did). Leave the jar out on the counter for 3 to 5 days (taste the pickles after the third day and leave out longer depending on how sour you want them). After desired sourness is reached, refrigerate pickles. They will keep refrigerated for up to 30 days.
Posted by Cook In / Dine Out at 12:00 AM