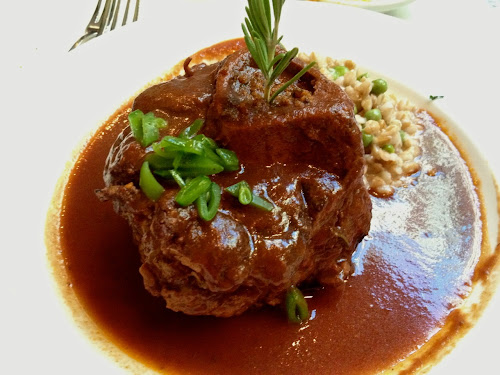 Nobody likes bad news, and it's no fun being the bearer of it. The vast majority of my criticism of restaurants has been very positive. I want to share with you the good things I've discovered so that you may enjoy them too, and we can trade notes about our favorite dishes. I wrestled with whether to write this review, but in the end, I decided I should.

A wise critic--Tim Gunn of Project Runway--discussed in his memoir that when critiquing the work of the show's contestants, he focuses on giving only actionable feedback. Once dress construction is under way, suggesting ways the tailoring or embellishment could be adjusted to make the look more appealing is helpful. Telling the contestant that their fabric choices are all wrong is not (they aren't allowed a return trip to the fabric store). Thus, despite being "negative," thoughtful criticism can and should be a "positive." Not a slam, but an invitation to improve.

It's in that vein that I'm sharing my views on Becco, an Italian restaurant in New York's Theater District that I had high hopes would deliver a wonderful pre-theater dinner but was ultimately disappointing. The restaurant is owned by Lidia Bastianich and her son Joe. The Bastianiches are not small-time restauranteurs: Lidia is a well-known cookbook writer and Emmy Award-winning television food personality; Joe is a James Beard-award winning restauranteur and best-selling food writer. Together, along with Mario Batali, they are co-owners of Del Posto, one of New York City's five four-star restaurants; Eataly, the fabulous Italian market off Madison Square Park and a favorite lunch spot; and Lupa, a cozy Italian restaurant in Greenwich Village that I absolutely adore. By all counts, these are people who know a lot about food and restaurants. I had high hopes Becco would deliver an experience of a similar caliber to what I've enjoyed in their other establishments.

But that didn't happen. While there was nothing egregious about the food or service at Becco, there was nothing special about it either. The food ranged from "not bad" to "pretty bland," with nothing that would make us want to go back for more. With so many competitors placing an emphasis on creativity, quality and freshness, I was surprised to find these lacking at Becco.

The meal opened with Caesar salad, a dish historically tainted with excess dressing and forgettable ingredients but that has shown signs of renaissance lately, as chefs turn out incredible Caesars brightened with citrus, quality anchovies, good cheese and a light hand with the dressing (Palena or Graffiato in Washington, D.C., for example). Unfortunately, this Caesar does not aspire to greatness. The lettuce was limp and didn't appear particularly fresh, as it was a bit brown around the edges in places. There was way too much dressing of the gloppy, creamy variety. There were two other salads on the menu--including a decent-sounding one with asparagus, fava beans and peas--but with the Caesar already provided (in generous portion) with every entree, I don't see why anyone would ever need to order a second salad.

I enjoyed my entree, an Osso Buco (braised veal shank, pictured at top) billed as the restaurant's signature dish. The meat was tender and flavorful and the meaty bone marrow, which you get a little tiny fork to eat with, is redolent of fresh rosemary. Chris's entree, an evening special of braised shortrib with sweet potatoes and kale wasn't terrible, but it was also lacking in flavor. The meat, which was the best part, was fairly tender, but lacked seasoning.


The sides, however, were seriously lacking in flavor. My dish's farro side came with peas devoid of flavor and drained of their bright green color (after having marvelous pea dishes at Blue Hill the previous night, it was quite a contrast to eat peas that had almost no taste). Chris's kale side was also pretty bland, as if it had not been seasoned at all.

The Panna Cotta dessert was also disappointing. The Italian custard should be creamy and just barely set. This one was pretty solid and not particularly flavorful. Once we'd polished off the macerated golden raisins, the remaining rubbery custard wasn't very interesting.


We didn't try the Sinfonia di Paste (a trio of all-you-can-eat pastas), which is prominently featured in a box at the top of the menu, but we saw plenty of it going around the dining room to know we probably made the right decision. The evening's features were a spaghetti with tomato sauce, a penne with broccoli and parsley and a seafood risotto. There's a beautiful pasta dish on the front of Becco's website; none of those three offerings looked anywhere near as appetizing as that.

On the plus side, Becco has a voluminous selection of wines, including a very long list (like probably 100 or wines) offered at just $25 a bottle, which is a great deal for wine at a restaurant. We enjoyed a delightful Sicilian Syrah, but could have easily been tempted by a Barbera D’Asti or Nero d'Avola.

Becco's space is also charming (albeit cramped) and the location is prime: it's part of Broadway's "Restaurant Row" on West 46th Street. However, that location may be part of the problem.

For whatever reason, restaurants around the Theater District tend to be subpar. They are easily flooded with tourists and others seeking a meal before a play or musical. Thus, they don't have to try very hard. The unfortunate outcome of this equation is that the quintessential New York City night-out of dinner and theater often results in only the second part of that duo being very interesting. A lot of people seem resigned to this. I'm not one of them. Imagine if the plays were likewise ho-hum; would anyone bother? (I suppose sometimes the plays are, but many Broadway plays win Tony Awards; few if any Theater District restaurants are getting James Beard nominations.)

That I know the Bastianiches are capable of delivering restaurant excellence but haven't at Becco is particularly vexing. They have the know-how to make Becco a top-notch place that theatergoers would clamor to get into before a show. I'd love to see them bring this place up to par with their other very good offerings.