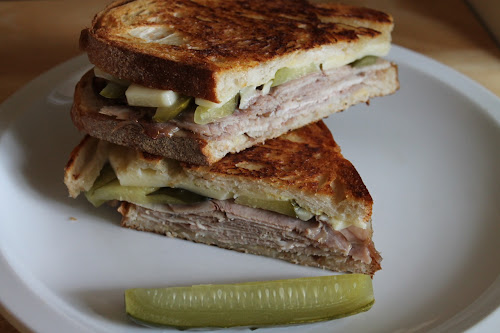 To showcase the homemade sour pickles, I wanted a really good sandwich in which pickles are star players. Lots of sandwiches have pickles but they play a supporting role, like in burgers. In the Cuban sandwich, which has relatively few ingredients, pickles are a more essential ingredient.

Traditionally, Cuban sandwiches have both ham and roasted pork. However, I used herbed ham from Whole Foods that was a sort of hybrid between the two--definitely meatier and more flavorful than your run-of-the-mill sliced sandwich ham. It was perfect for this sandwich. 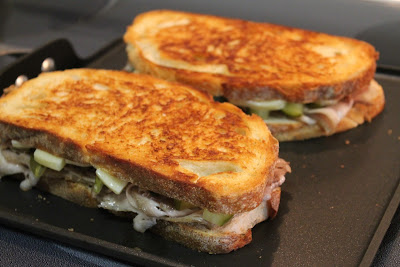 4 slices crusty sliced sandwich bread
About 1 tbsp. unsalted butter
Dijon mustard (most recipes call for yellow, but I used Dijon because that's what I had)
3/4 lb. ham (rather than salty sandwich ham, I used Whole Foods herbed ham, which is almost like a cross between ham and roasted pork)
2 oz. gruyere cheese
Sour pickles, about 1 whole cucumber's worth, sliced about 1/8 to 1/4 inch thick (see recipe)

Heat flat skillet pan over medium heat. Butter one side of each slice of bread. Build the sandwiches with the buttered sides on the outside: spread mustard on the inside of each slice and layer the ham, cheese and pickles. Grill until the cheese starts to melt and the buttered slices are browned, turning after the bottom slices are browned. Serve with additional sour pickles.
Posted by Cook In / Dine Out at 12:01 AM