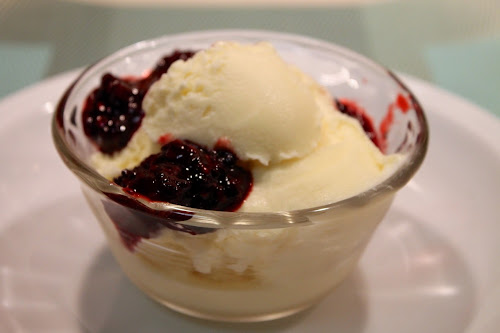 I was so enamored by the flavor of the reduced corn juice used in the Sweet Corn Agnolotti that I thought it would be delicious to use in making ice cream too. Apparently I'm not the only one who thinks corn ice cream is worth a try: Melissa Clark wrote about it in the New York Times last week.

My technique is a little different than hers in that I extracted the corn juice and discarded the corn "pulp" rather than steeping the cream in it. I did also use the cobs though, so don't think this makes it any less "corny." 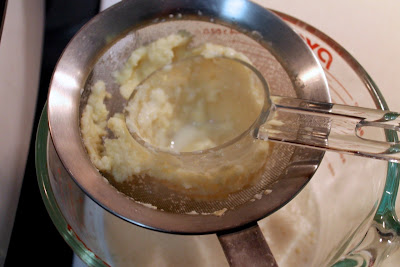 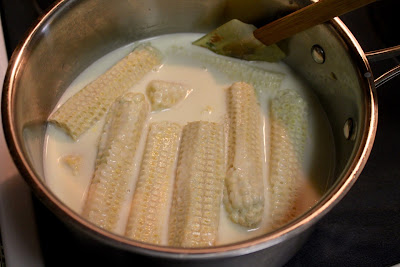 Since I've been using the Jeni Britton Bauer method of ice-cream-making a lot lately, I decided to go the more traditional egg custard route with this recipe. This ice cream has intense corn flavor and just the right level of sweetness. 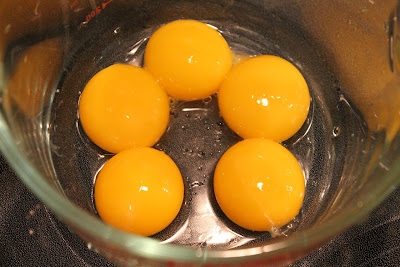 I imagine any simple berry topping would be good on this. I decided to go with blackberries this time, but was awfully tempted by the blueberries (I'm saving them for panna cotta, which I hope to share with you soon). 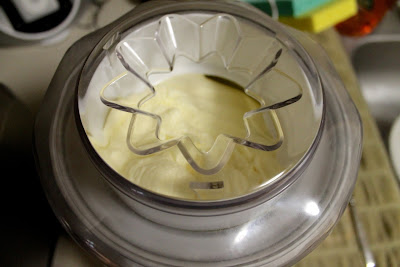 1. Cut the kernels off the cobs and reserve the cobs. Scrape the cobs with the back of the knife to extract any remaining bits of corn and juice. Transfer kernels and scrapings to a food processor (fitted with the standard blade) and process for 1 1/2 minutes until pureed and smooth. Scrape down the sides of the bowl and process another 20 seconds or so to incorporate. Discard the cobs or keep them for another use (like making corn stock).

2. Place a fine-mesh sieve over a mixing bowl and strain the corn mixture, pressing on the solids to push through as much juice as possible (I did this in batches of about 1/3 cup, using the measuring cup to push on the solids, which worked really well). This should make about 1 1/2 cups of corn juice.

3. Transfer corn juice to a large (4 qt.) saucepan and cook over medium heat for about 5 minutes, stirring frequently, until the juice reduces to about 1 cup. Add heavy cream, whole milk, sugar, salt and reserved corn cobs. Increase heat to medium-high and cook until the mixture reaches a temperature of 165 F. Reduce heat to low and simmer for 15 minutes. Remove and discard corn cobs.

4. In a small bowl, whisk together egg yolks. Whisk in about 1/2 cup of the warm cream mixture to temper the eggs, then whisk the egg mixture into the warm mixture in the saucepan. Continue cooking, whisking constantly, until the mixture reaches 180 F. Strain mixture with a fine mesh sieve and transfer to a large (1 gallon) resealable bag. Submerge in an ice water bath for about 10 minutes then chill in the refrigerator until cold.

5. Process in an ice cream maker according to the manufacturer's directions. Transfer to a container and freeze until hard. Set out a few minutes to soften a bit before serving.

Combine berries and sugar in a medium saucepan over medium heat. Cook, stirring frequently until the mixture boils, reduces and thickens, about 5-7 minutes. Stir in the water. Allow to cool and, if desired, strain out the seeds with a mesh sieve. Transfer sauce to a container to store in the refrigerator.