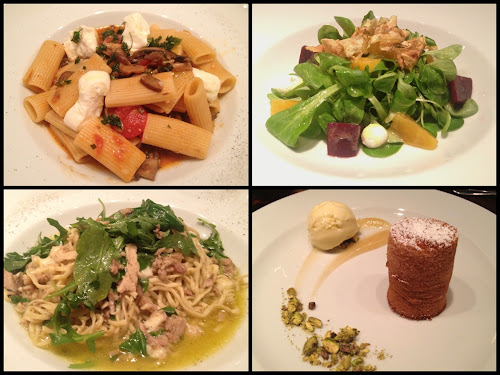 When Elisir opened a year and half ago, it was a formal white-tablecloth restaurant serving modernist Italian dishes. Judging by the photos of Chef Enzo Fargione’s work, like the ones in the review stories proudly displayed on the wall near the restrooms, the kitchen was concocting dazzling sculptures so beautiful I imagine it was difficult to take that first bite.

For whatever reason, be it the formality or the price of the tasting menus, despite excellent reviews, Washington didn’t bite, as least not enough for the restaurant to make money. So Elisir was transformed into Osteria Elisir, a casual Italian trattoria with an a la carte menu of antipasti, pasta and meat and seafood entrees. The tables were bared. The walls were repainted in shades of brown and decorated with mirrors and half wine barrels.

I never visited Elisir in its original formal incarnation but was pleased to enjoy dinner there recently, about a month into its casual transformation. The food may not have been as artful as it once was, but it was still quite good. Tender porchetta infuses a bowl of tagliolini pasta with smoky, salty flavors augmented by a conservative sprinkle of smoked mozzarella and bitter arugula. The stringy noodles have a rough texture like they were hand-cut and reminded me a bit of ramen actually.

Although the rigatoni doesn’t appear to also be homemade, it has good texture and flavor, graced with a mushroom-rosemary sauce and pieces of burrata, which is interesting to find in a pasta instead of by itself as a starter where I’ve usually encountered the creamy mozzarella.

The beets in our salad starter were superb, served with mâche greens, oranges, goat cheese and fried artichoke chips. We also had artichoke in our other starter, roasted this time and served with a mix of bell peppers, fennel, frisee, olives and capers. This was good too, although the most pedestrian of the dishes we sampled. Artichokes also appear on the menu fried with lemon, mint, garlic and anchovies.

As a big fan of olive oil, I couldn’t pass up the olive oil and sea salt sampler to accompany our bread basket. It featured a trio of oils from Liguria, Tuscany and Sicily and three accompanying sea salts infused with black olive, red wine and basil. The oils were all quite good and I particularly liked the basil salt, although I couldn’t detect much flavor in the red wine salt. Our meal ended well with a tasty warm almond cake served with ricotta gelato and prosecco-pear gel.

As good as the food was, I wish the service had been better. While our server was quite friendly, there appeared to be something amiss in the dining room, as he seemed to be a bit harried. That Elisir really overdoes the “whisk away” move only added to the sense of rush that surrounded dinner. My cocktail was removed with about a fourth of it left, and I probably would have eaten that last olive in our salad if given the chance. Annoyingly, the also employed the irksome practice of removing one diner’s plate before the other is finished, a move I wouldn’t have expected at a restaurant of this caliber. As fast as things were moving in the dining room, apparently the opposite was going on at the bar, as drink orders (our and our neighbors’) took quite some time to materialize (for which our server kindly made up for with a comped glass of wine).

When Elisir opened, it generated a significant amount of buzz and excitement. Despite the difficult time it may have had, I can’t help but wonder whether, in its new incarnation, things will be any easier. By moving from formal-modern to casual-elegant, the restaurant put itself in direct competition with a number of other fine Italian upscale-casual establishments downtown, such as Fiola and Bibiana. If the dishes at Osteria Elisir were able to retain some of the restaurant’s prior modernist flair, I think it would be on to something, but its current menu, while well-made, doesn’t have that sort of distinction.