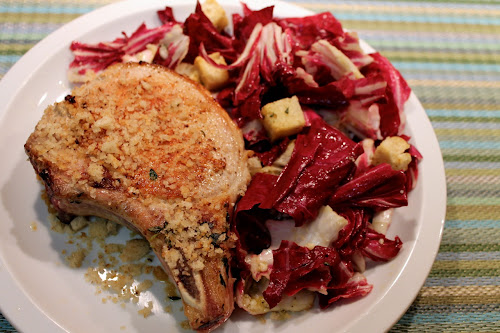 I’ve lived in the D.C. area for 14 years now, but there is a part of me that will always call Portland, Oregon home. It was a great place to grow up, and I take pride in the fact that it’s among the group of U.S. cities that elicit an “ah” rather than an “oh” when you tell people that’s where you’re from.

It’s no secret that Portland has a wonderful food scene and has for a long time. For the fourth year in a row, three of the five nominees for the Best Chef Northwest James Beard Award are from Portland (and Portland took four of the five slots in 2009).

I take a special pleasure in knowing that Portland consistently gets more nominations in this category than its larger neighbor to the north, Seattle (Portlanders are naturally competitive with Seattle; we can’t help it). When earlier this year people were declaring the Seattle food scene “in” and Portland “out” I thought “puh-lease.” You have no idea what you’re talking about.

This year’s finalist list includes three talented Portland chefs who are no strangers to James Beard:

Unfortunately, apart from Little Bird, I haven’t gotten to try these chefs’ food in person. But I did recently get the chance to experience their talent, albeit indirectly. As luck would have it, all three chefs contributed to The Oregonian Cookbook: Best Recipes from FoodDay, edited by Oregonian FoodDay editor Katherine Miller. I received the book as a generous gift from one of my mother’s friends, a Cook In / Dine Out reader, and I thought there could be no better way to both dive into the book and celebrate Portland’s James Beard nominations than by cooking a dinner featuring all three dishes. 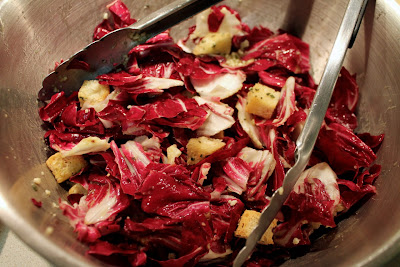 First up was Whims’ Nostrana Salad made with radicchio, a Caesar-like vinaigrette and buttery herbed croutons. She soaks the radicchio in ice water for 2 hours, which mellows its flavor. I actually forgot to do this, so it got maybe 15-20 minutes of soaking, which was enough time to crisp it a bit, but I actually rather like its bitterness, so I didn’t mind. The herb croutons are really great. I made mine with a rosemary boule from Whole Foods.


Next was Rucker’s Pan-Seared Pork Chops with Thyme and Bacon Crumbs. This is a simple, flavorful way to prepare pork chops. I love the bacon-flavored fresh breadcrumbs. Since I had to cook some bacon to render its fat, I tossed a few of the cooked bacon lardons into the Nostrana Salad. Be sure to use thick, bone-in pork chops for this dish. The thin, quick-cooking chops are actually challenging to cook well since they can become tough so easily. 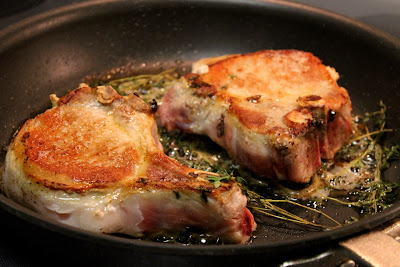 I finished the meal with Pomeroy’s exquisite Chocolate Truffle Cake, which was so divine, I’m giving it a separate post.

A meal of good Oregon chefs’ dishes calls for a good Oregon wine, and nothing says “good Oregon wine” like pinot noir. I opened a bottle of 2009 Brandborg Bench Lands pinot noir, which heralds from the Umpqua Valley, a southern Oregon wine region near where my dear Great Aunt Eva lived. The light, smooth pinot was a nice match for this dinner and a perfect way to toast the success of these great Oregon chefs. I found it at Cordial in Union Market. I wish them all the best of luck at the upcoming James Beard Awards on May 3. 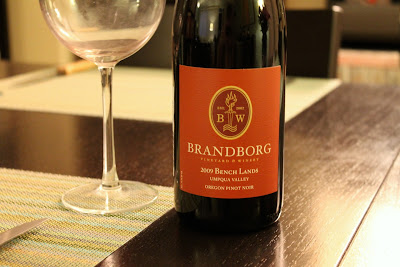 Nostrana Salad
Adapted from a recipe by Cathy Whims of Nostrana, from The Oregonian Cookbook

Note: I divided this recipe in half, omitted the (1 tbsp.) white wine and substituted about ½ tsp. of soy lecithin granules for the raw egg yolk. I also didn’t soak the radicchio in ice water for the full 2 hours, which would have made its flavor milder, but I like its bitter taste. For the croutons, I used an organic rosemary boule, which was delicious with the radicchio.

1. Tear the radicchio into 1 ½-inch pieces and soak in ice water while you make the croutons and dressing.

2. Preheat oven to 375 F. Bake the bread cubes on a large baking sheet until toasted all over, about 10 to 15 minutes. In a medium to large skillet over medium-low heat, melt the butter with the fresh chopped herbs until fragrant. Add the toasted bread cubes and toss to coat. Set aside to cool.

3. Smash the garlic clove then mash it finely with a pinch of salt in a mortar and pestle (lacking that, I use a 1-cup glass measuring cup and the rounded end of a cocktail muddler). Add garlic to a food processor (or blender) along with the vinegar, mayonnaise, anchovies and lecithin (or egg yolk). Begin processing then slowly drizzle the olive oil through the feed tube until the dressing is emulsified. Season to taste with salt and fresh-ground black pepper.

4. Drain the radicchio and spin it in a salad spinner to dry. Transfer radicchio to a large salad bowl and add enough dressing to coat it well. Toss to combine then add the croutons and a generous sprinkle of parmesan.

Pan-Seared Pork Chops with Thyme and Bacon Crumbs
Adapted from a recipe by Gabriel Rucker of Le Pigeon, from The Oregonian Cookbook

Note: Like the Nostrana Salad, I divided this in half, since I was cooking for two. I didn’t make any other changes. To make fresh bread crumbs, use slightly stale good-quality bread (I used a few slices of sourdough). Tear the bread into pieces and add to a food processor. Pulse a few times until the bread is reduced to crumbs.

1. In a small frying pan, heat bacon fat over medium heat until melted. Ad breadcrumbs, stir to coat with the fat and cook, stirring frequently, until crumbs are golden brown, about 5 to 7 minutes. Season with salt and pepper and set aside.

2. Pat chops dry with paper towels and season liberally with salt. In a medium skillet, heat oil over medium-high heat until hot (it should shimmer). Place the pork chops in the pan spaced apart a bit. Add the butter and scatter the thyme sprigs in the pan. Cook chops until well browned, about 6 minutes, then flip them over and continue cooking until lightly browned and cooked through to 140 F (medium), about 3 to 5 minutes longer (mine took a bit longer to reach temperature, but I also cooked through over slightly lower heat).

3.  Transfer pork to serving platter, spoon some of the butter from the pan over the chops and allow them to cool for about 5 minutes. Just before serving, squeeze lemon juice over the chops and top with a handful of the breadcrumbs.